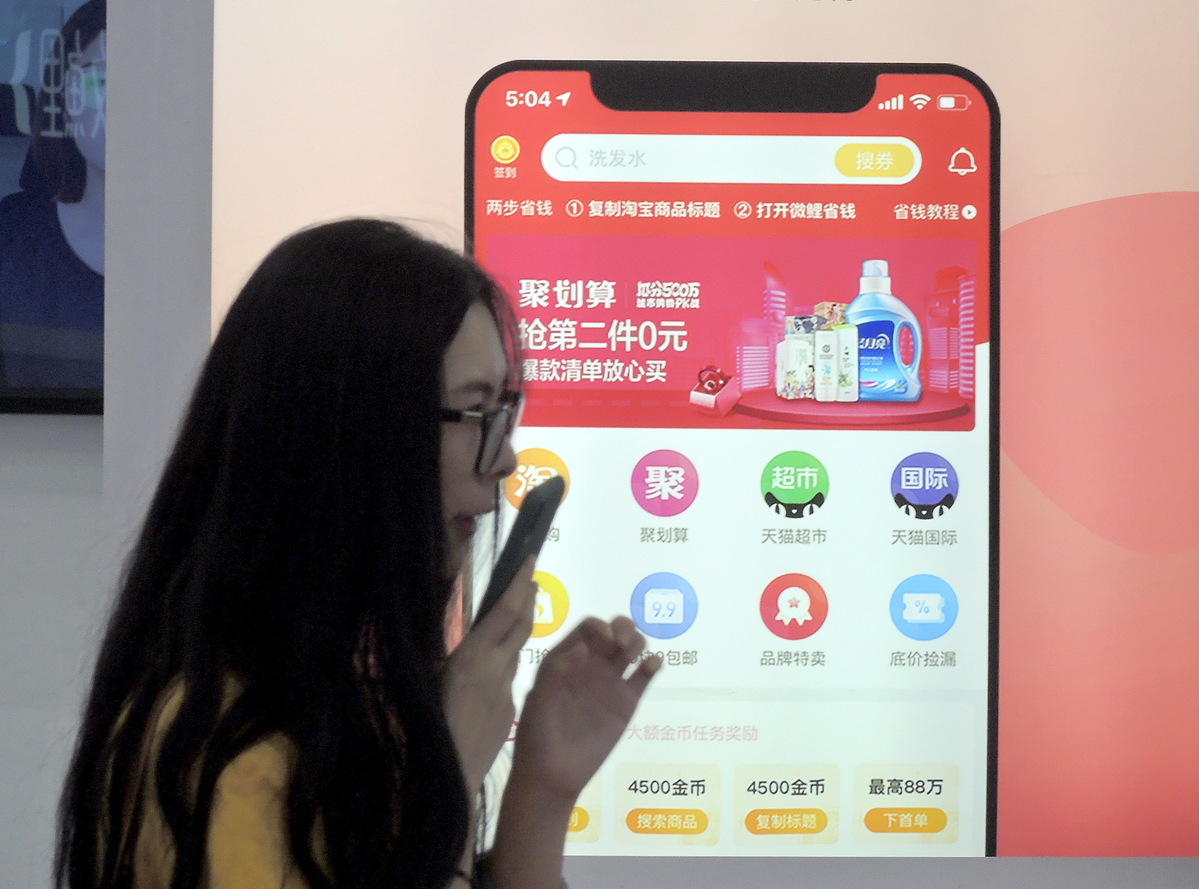 A visitor passes an advertisement of Juhuasuan, a group-buying and flash-sale platform of Alibaba, at an industrial expo in Nanjing, Jiangsu province. (Photo: China Daily)

Times are changing fast at e-commerce behemoth Alibaba Group Holding Ltd. While store-openings from a range of global brands like Burberry to Ferragamo were the norm earlier, they have since been replaced by deals, bargains and growth in lower-tier cities.

Against flattened economic growth and brutally aggressive competition, Alibaba is now giving unprecedented priority to Juhuasuan, its group-buying and flash-sale platform, repositioning it as the top destination for consumers from smaller cities and townships.

The internet giant said recently that it will host a Super Bargain Day from Sept 1, halving prices for 1 million merchandise and giving out cash dividends, coupons and other perks. Unlike the more reputable Nov 11 annual sales event, the 10-day event is targeted at good-quality budget items.

"We see massive growth in lower-tier cities this year via the Juhuasuan platform. This is the engine fueling future growth and a bluesea market－meaning opportunities abound for each and every industry player to take a share," said Liu Bo, general manager of Juhuasuan.

Media publications and industry analysts often categorize Chinese cities into tiers, defining them based on population, gross domestic product and other criteria. Tier-one cities normally refer to super metropolises like Beijing and Shanghai.

Alibaba's strategy to penetrate into lower-tier markets has reaped some early gains. In the quarter ending June 30, over 70 percent of increased annual active consumers came from less developed markets. The company attributed the achievement to initiatives to cater to a broader user base, such as "using simpler interfaces for first-time or less-frequent users".

Realizing the potential, Juhuasuan has announced a slew of plans to rev up services. On the supply side, the platform aims to help manufacturers digitize their factories through consumer analytics and the internet of things technology. Liu said he hopes such efforts will foster 100,000 brands, create 1 million sought-after items and nurture 10,000 digital plants.

Another goal is to incubate more than 1,000 industry clusters worldwide. To this end, Juhuasuan plans to establish a new supply center, bridging upstream farmers and manufacturers with e-commerce merchants, while designing promotional campaigns to help them sell to consumers.

For instance, data and analytics helped tweak designs for Belle, whose 12,000 pairs of macaron-colored lace-up leather shoes, a co-creation with Alibaba, were snapped up in days during a midyear sales event.

"Over half of the buyers purchasing a pair came from third-tier cities and below," said Li Liang, executive managing director at Belle International. "Data-backed customization helps revamp the entire product cycle from design to manufacturing, whereas new marketing activities like livestreaming helped better reach out to customers."

To glue users to its platforms, Alibaba pledged to devote more resources to social media platforms, from popular microblogging service Weibo to short-video app Douyin and Kuaishou, as digital avenues for product launches and recommendations.

"We are seeing this powerful, secular force driving Alibaba revenue and shares, especially the population from lower-tier cities, which are just opening up," said Hari Srinivasan, senior research analyst at Neuberger Berman. "This can grow double digit for the next decade, so there is a lot of demand to go around."

Incentives for product sharing among family and friends will also be put in place, while no details were disclosed yet. This is a clear take on highflying archrival Pinduoduo, which leverages the bulk of 1 billion users of WeChat－the country's dominant messaging app－for group-buying value-formoney products.

"To deepen its penetration to lower-tier markets, Alibaba's unique strengths are its brand value as well as its army of well-established sub-platforms, and an entire ecosystem from logistics to financial services," said Cao Lei, research director of China E-Commerce Research Center.

In a 2018 report, Morgan Stanley wrote it expects consumption in China's lower-tier cities to triple to $6.9 trillion by 2030. The investment bank also found that consumers in smaller cities are catching up with tier-one and tier-two markets in valuing quality over price.

"In this context, even as social network seems to be the missing piece of the puzzle for Alibaba, the vast consumer market is not necessarily a zero-sum game," Cao said, adding that various players can expand the pie together using respective growth strategies.