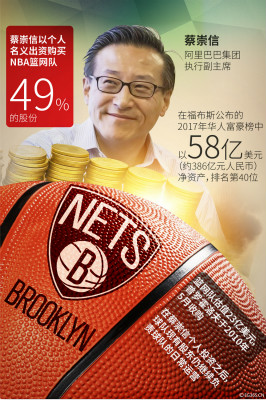 Joseph Tsai, Alibaba's executive vice chairman, has reached an agreement in principle to acquire the stake, the report said.

The agreement leaves open the possibility of acquiring a controlling interest in the NBA franchise in a few years, according to ESPN.

The sources said that the price of Tsai's stake will be based upon a $2.3 billion valuation of the team, the ESPN report said.