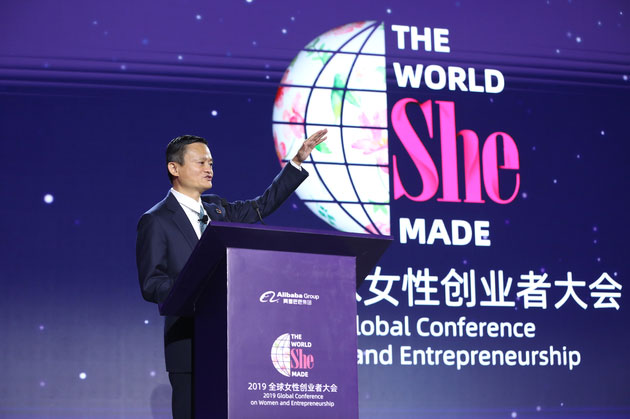 Alibaba founder Jack Ma speaks at the 2019 Global Conference on Women and Entrepreneurship in Hangzhou, Zhejiang province, on Aug 28, 2019. (Photo/Chinadaily.com.cn)

Women have played a vital role at Alibaba since the company was established, said founder Jack Ma in Hangzhou on Wednesday at the 2019 Global Conference on Women and Entrepreneurship.

Ma said that women hold a number of advantages over men in e-commerce, and he thinks they are more adaptable and more likely to embrace change.

Although men are considered the drivers of the technology era, Ma does not agree, saying that 51 percent of Alibaba's designers and nearly half of the company's product testers are women.

Ma said he believes social progress will accelerate if women can participate in future technology and product design.

In the next 30 years, women will find it easier to succeed in the digital era because they focus more on experience when doing business, said Ma.

Ma also said that women need to account for a minimum of 33 percent of Alibaba staff members.

On online shopping platforms, 65 percent of products are being bought by women.

On Taobao, women buy over half of men's clothes, 60 percent of condiments, 70-80 percent of children's living goods and school supplies, and 65 percent goods of public benefit.