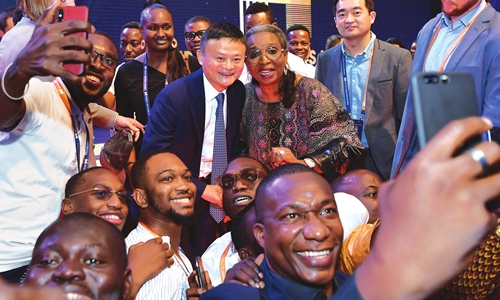 Alibaba's billionaire co-founder Jack Ma Yun had a busy day over the weekend in Africa - attending a digital economy summit in Nigeria, participating in an entrepreneurs' dialogue in Togo and being a judge for an African business heroes show in Ghana.

Ma has turned his attention to the young African continent, serving as a huge encouragement for local start-up entrepreneurs as African countries are poised to embrace rich opportunities in developing the new digital economy, industry insiders said Monday.

Nigerian entrepreneur Temie Giwa-Tubosun took the top award in the first annual competition for African businesses on Saturday night (local time) in Ghana. She won $250,000 in cash for her blood bank project out of the $1 million offered by the Africa Netpreneur Prize Initiative, founded by the Jack Ma Foundation after Ma made his first trip to Africa in July 2017.

The organization said it will host the business competition across Africa for the next 10 years and grant $10 million to African entrepreneurs over that time, said an online report by China's CRI radio network on Monday.

Ma is a popular figure among young African entrepreneurs, as he stands for Chinese companies' strengths in internet technologies and innovative business models. He's also a figure of hope and the future as reflected by Alibaba's rise from scratch, said He Wenping, a research fellow of the Institute of West-Asian and African Studies at the Chinese Academy of Social Sciences.

"Ma's plain and pragmatic words have ignited hope and enthusiasm in those African entrepreneurs that they can also make something out of nothing, just as Ma ushered in the e-commerce era in China in 1999 when few people believed in the internet," He told the Global Times Monday.

"Ma is never afraid of doing the undoable," said Shingi Magada, CEO and co-founder of Kumusha Kwedu, a start-up in Zimbabwe.

"He is one of the most recognizable voices and faces around the world because of his success with Alibaba. To Africans he holds a special place in our hearts because he was the first Chinese person to promise to visit every single African country in the next 15 years," Magada said.

"Ma's down-to-earth business spirit inspired me to fulfill our company's vision, which is to see every African home become a smart home in the next 30 years," Magada noted.

Hannah Ryder, CEO of Development Reimagined, the first Kenyan wholly owned foreign enterprise based in Beijing, told the Global Times on Monday that many Africans feel they can relate to Ma's story and aspire to create the same kind of large and influential institutions in their countries as he has in China.

"The prize initiative is one of a kind in creating more awareness and understanding in China of African entrepreneurship. It will certainly be helpful to African companies, bolstering the efforts of other African business leaders who are also trying to support African entrepreneurs with finance and training," Ryder said.

Her company has been discussing a platform for African businesses in China with Alibaba and other e-commerce platforms, and "we hope this can be part of Ma's legacy in having a positive impact in Africa," she noted.

There is huge potential for the digital economy to flourish in Africa, analysts said, but the process won't involve simply copying from China - it also should be highly integrated with local demand.

Unlike traditional Chinese companies' contact with the continent, Ma is offering ideas on entrepreneurship to African businesses in a way that aims to cultivate internal growth momentum for Africa. It's a different approach from direct Chinese investment in big projects like infrastructure, according to He.

"He's sowing the seeds, but Africans will reap the gains through their own efforts," said He.

Richard Ma, an employee in a Chinese mobile internet start-up based in Nairobi, said that despite such challenges as poor infrastructure in Africa, there are unexplored markets in Africa that have drawn few firms' interest.

"The venture capital mechanism is not well-established in the continent so that Alibaba's funding can help start-ups land," Richard Ma said.