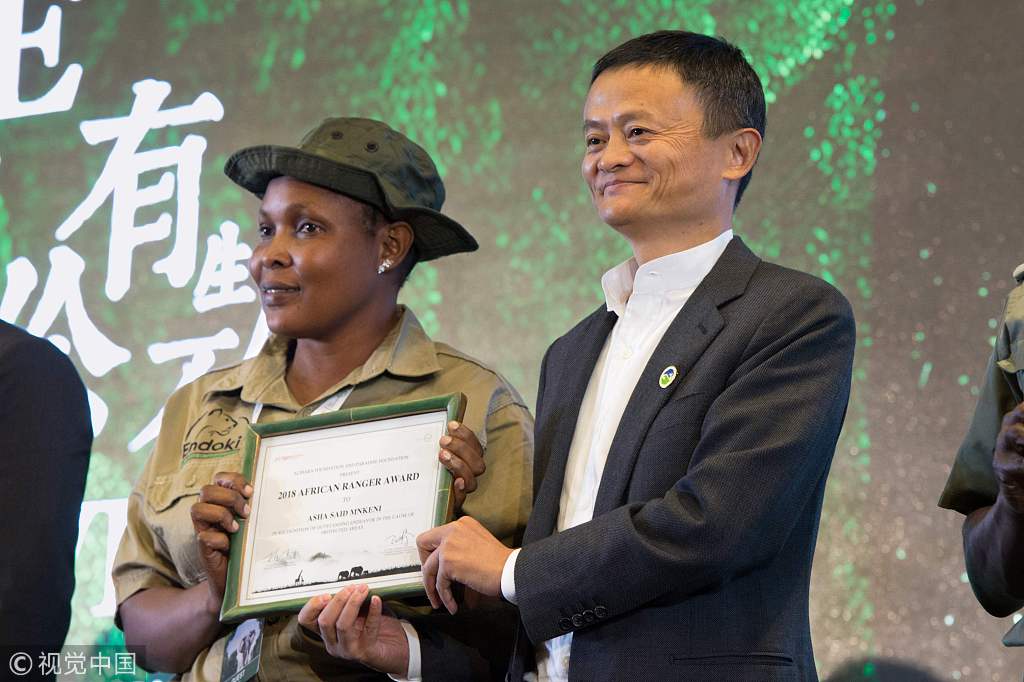 Jack Ma (R), Chairman of the Alibaba Corporation in China presents Asha Saidi Mnkeni, a game ranger from Tanzania and one of the award winners a certificate during the first annual African Ranger Awards ceremony in Cape Town, on August 7, 2018. [Photo: VCG/Rodger Bosch]

The prize was presented at a conference dubbed Netpreneurs: The Rise of Africa's Digital Lions.

The prize will award 10 million U.S. dollars to 100 African entrepreneurs over the next 10 years focused on grassroots innovation, economic empowerment of women and small business.

"As a fellow entrepreneur, I understand the importance of getting support during the early days," said Ma. "This prize demonstrates our support of the next generation of young entrepreneurs across Africa who are paving the way for a better future and imparting positive change in their communities."

Starting from 2019, the Jack Ma Foundation will host annual pitch competition, with 10 finalists selected from across the continent to showcase their talent and business ideas and compete for 1 million U.S. dollars in prize money.

All 10 finalists will receive grant funding from the Jack Ma Foundation as well as access to the Netpreneur community of African business leaders to leverage the community's shared expertise, best practices and resources.

Ma said, "I am inspired and encouraged by these entrepreneurs who, together, will help build a sustainable, inclusive economy for Africa and for the world."

He said that he was inspired to launch the initiative when he visited Africa for the first time last year and inspired by the energy and entrepreneurial potential of the young people he met.

Ma encouraged the youth to dream big and be innovative.

He stated that Africa is a continent of many opportunities with a vibrant young population and potential entrepreneurs.

"This land is full of chance, opportunities and dreams," he said. "This is where the future is, high praise for our beautiful continent."

"With the rapid development of the global digital economy and the availability of technology, the next century belongs to Africa," said Ban. "Through this prize, we aim to support African entrepreneurs to build a more inclusive and prosperous Africa and dramatically shape the future prospects of the continent for the better."

The secretary-general of United Nations Conference on Trade and Development (UNCTAD), Mukhisa Kituyi, weighed in his support for the program.

"The rise of the digital economy provides growth and opportunity to the developing world," he said. "It is up to us to make sure no one is left behind. The work that Jack Ma and UNCTAD are doing together will help empower the emerging generation of young African business leaders to participate in and lead that growth."

This is the second initiative launched by Ma to support African entrepreneurs.

Last year, Alibaba Business School and UNCTAD announced the eFounders Fellowship Initiative, a program that will train 1,000 entrepreneurs from emerging markets, 200 of whom will come from Africa.

A total of 52 African entrepreneurs have participated in this two-week fellowship at Alibaba's headquarters in Hangzhou, China.