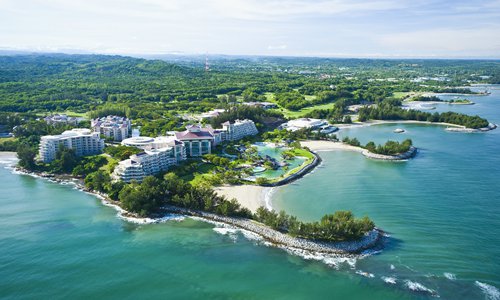 Since its launch in Brunei at the end of May this year, the number of businesses accepting Alipay payments from Chinese visitors is on the rise.

Alipay is the world's largest mobile payment platform and is primarily used by Chinese people in their paperless-payment culture in China and abroad.

There are now more than 50 merchants in the country equipped to accept Alipay. Mulia Hotel, one of the oldest hotels in the sultanate, became the first hotel in Brunei to install the Alipay Payment System on Monday.

According to the hotel, the decision to install Alipay was due to strong demand from their Chinese guests.

Industry sources indicated that more hotels in the country are expected to join Alipay, primarily due to increasing numbers of Chinese tourists.

Mohd Iswandi, the Director of Operations at Mulia Hotel and the newly-elected President of the Brunei Association of Hotels, told Xinhua that from 2018's in-house classification report, Mulia Hotel had received around 8,000 guests from China last year.

He also said that this year, between January and July 2019, the hotel had already received 14,867 guests from China - a big jump of more than 50 percent.

Most tourists from China that check into the hotel will ask for Alipay, and previously the hotel staff had no idea what that was, Mohd Iswandi explained, adding that he himself had not known either.

"So, when we had our meeting with the Brunei Tourism Board, the Minister of Primary Resources and Tourism Dato Ali asked us to engage with the Alipay team in Brunei. Upon [learning what Alipay was], we engaged with BEEP Digital Solutions, and today we become the first hotel to install the payment system," he added.

"According to the Brunei Tourism Board, there were 60,000 Chinese arrivals to Brunei last year. We only accommodated 8,000 of them. This year may reach 80,000 tourists from China. We already received more than 14,000 from January to July. Thus, the number is increasing," he said.

"We are preparing for the influx. In 2018, the Chinese are fast becoming international travelers and they spent hundreds of billions of dollars on holiday travel overseas. Cashless payment is already a culture in China, and Alipay is at the forefront. Thus facilitating our honored guests with their preferred payment system such as Alipay is only logical," he further explained.

Denny Muslim, Director and Chief Strategy & Product Officer at BEEP Digital Solutions, said Alipay remains one of the preferred payment methods for outbound Chinese tourists, with about 99 percent of outbound Chinese travelers being Alipay users according to statistics in 2018.

Since launching its mobile payment acceptance solution at the end of May, BEEP Digital Solutions has already activated about 50 merchants, mostly in tourists hotspots such as the airport and downtown areas.

These areas are already encountering Chinese visitors, who frequent merchants such as the SBC Duty Free Shop at the airport, Hua Ho Supermarket and Department Store in One City Mall, SKH Supermarket in Annajat Complex and Coffee Bean and Tea Leaf in One City Mall.

"In Brunei, there is a need to further facilitate local spending by the Chinese, with Chinese tourists already topping the tourist arrivals into Brunei. Beyond being just a payment facilitator, Alipay is ideally positioned as a marketing platform, being able to reach out and engage its users through digital channels, more effectively driving more traffic to the merchants' storefronts and allowing them to realize better revenue opportunities," Muslim said.

With Mulia Hotel now on board as a Chinese-tourist-friendly hotel, as its commercial establishments are now able to accept Alipay Mobile Payments, it is hoped that other hotels in the country will follow suit to serve their Chinese customers better, according to Muslim.

"With an increasing base of merchants already taking up the payment solution, BEEP Digital Solutions is also working with local stakeholders such as Brunei Tourism Board and the Brunei Association of Hotels to further capitalize on the China opportunity."