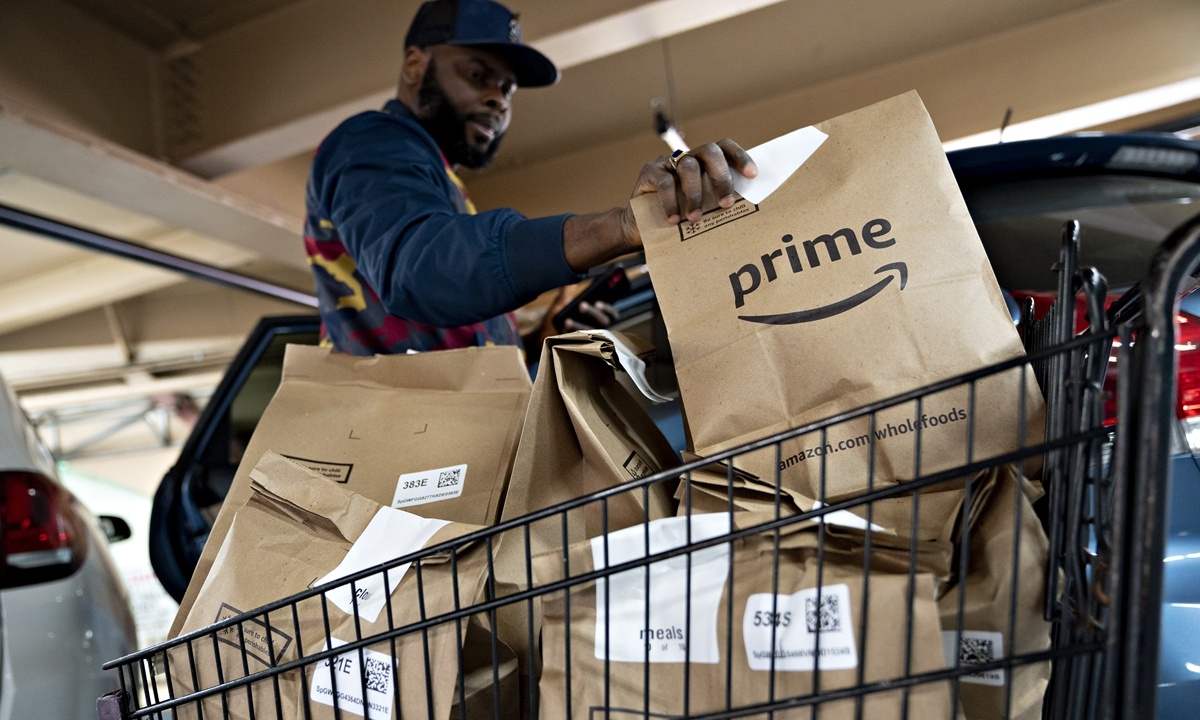 An independent contractor picks up an Amazon.com Inc. Prime grocery bag outside a Whole Foods Market Inc. store in Washington DC, the US, on March 31, 2020. (Photo: VCG)

An intense crackdown that's been in progress for months against Chinese companies, including some big names, by US-based e-commerce platform Amazon has sent a warning to China's e-commerce businesses that they not only need to comply with the rules but also speed up development of leading cross-border e-commerce platforms of global scale, industry analysts said.

Since June, the US company has banned several top Chinese merchants from its platforms for alleged paid reviews. The list includes some big names whose sales on the platform exceed $1 billion.

Shenzhen Youkeshu Technology, one of the largest Chinese retailers on Amazon, was reported to have 340 stores closed and have 130 million yuan ($20 million) in funds frozen amid the crackdown, according to a filing issued by the merchant's Shenzhen-listed parent Tiza Information Industry Corp earlier this month.

The blocking of these top sellers could be an outgrowth of the China-US trade war, as China's cross-border sellers are taking a larger role on Amazon, according to a Chinese seller on Amazon.

"Although Amazon does have rules prohibiting paid reviews, the phenomenon also exists among US sellers. However, I haven't heard they are banned or impacted as widely as Chinese sellers," the seller told the Global Times on Tuesday on condition of anonymity.

"The blocked list reveals that this crackdown specifically targets the top Chinese brand in each category," he said.

According to e-commerce data company Marketplace, 42 percent of the top sellers on Amazon were from China as of the end of 2020, whereas the figure was just 11 percent in 2016. Overall sales by Chinese merchants on the platform ranked second only to US sellers.

The crackdown was a wake-up call for all Chinese practitioners and companies on Amazon, warning them to assess their compliance, the seller said.

The storm is likely to enhance Chinese sellers' understanding of Amazon's rules, which will make them more sophisticated and cautious going forward, independent tech analyst Fu Liang told the Global Times on Tuesday.

"It comes as a lesson to China's e-commerce companies, that they need to respect the rules and not exploit loopholes, which is fundamental to the long-term integrity of any enterprise, no matter what platforms it is on," Fu said.

The crackdown also comes as a wake-up call for Chinese businesses to explore other channels so as to avoid risks, as many are still reliant on Amazon to conduct overseas sales, experts said.

The anonymous retailer said that although sales on Amazon only account for part of his business, it is still the major channel for most Chinese retailers.

China's cross-border enterprises are highly dependent on Amazon, PayPal, Facebook and Google to explore the global market, and it is necessary to build China's own leading platform for cross-border e-commerce, Wang Xin, president of the Shenzhen Cross-Border E-Commerce Association, told the Global Times on Tuesday.

In the first half of the year, domestic cross-border trading platforms grew rapidly amid surging overseas demand amid the global recovery from the COVID-19. Transactions on Alibaba's international site increased 111 percent from the same period last year, according to data sent by the platform to the Global Times on Tuesday.

The top three countries in terms of transaction volumes were the US, the UK and Canada, with gains of 115 percent, 93 percent and 131 percent, respectively.