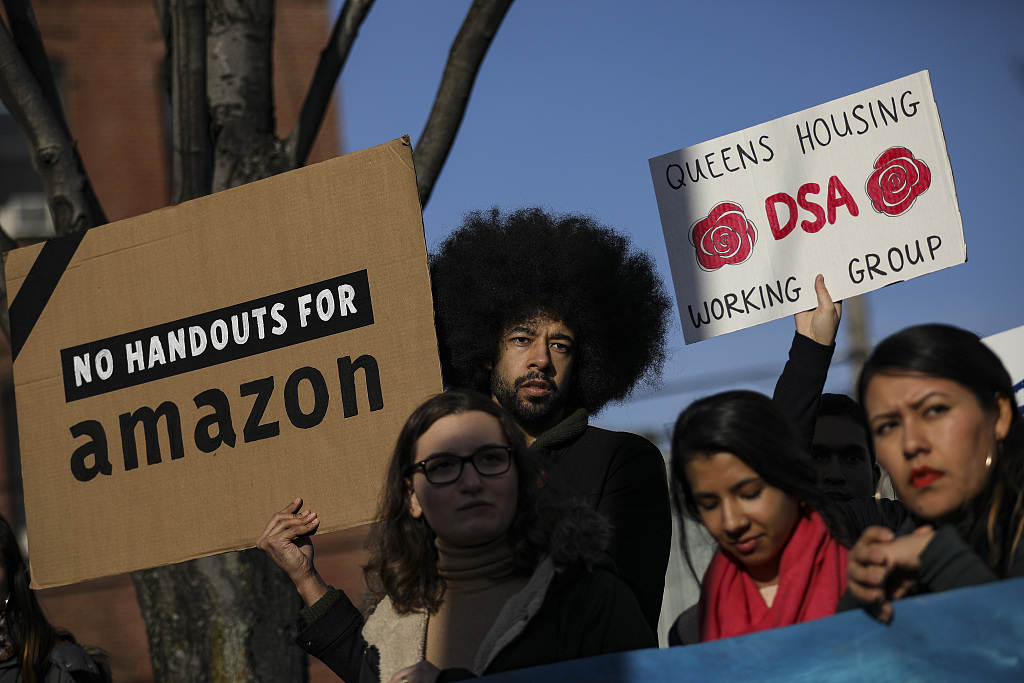 Activists and community members who opposed Amazon's plan to move into Queens rally in celebration of Amazon's decision to pull out of the deal, in the Long Island City neighborhood, February 14, 2019 in the Queens borough of New York City. (File photo: VCG)

SAN FRANCISCO, Feb. 15 (Xinhua) -- US e-commerce giant Amazon canceled its plans to build a new headquarters in New York City, though most New Yorkers support it. Some local politicians as well as trade unions and community activists were blamed for Amazon pulling out.

Amazon said on Thursday it would not build a new headquarters due to opposition from "some state and local politicians."

"After much thought and deliberation, we've decided not to move forward with our plans to build a headquarters for Amazon in Long Island City, Queens," Amazon said.

Amazon's decision to scrap its second national headquarters in the Queens borough was a result of resistance from some local officials, unions and community activists, Stanley Kwong, a professor of International Marketing at University of San Francisco, told Xinhua Thursday.

He called the Amazon decision "a stunning reversal" for one of the world's most valuable companies, which had promised to put half of the 50,000 jobs in the Long Island City neighborhood.

Amazon said polls show 70 percent of New Yorkers support its plans and investments in the city, but Kwong pointed out that some grassroots communities feared that the influx of usually high-paid Amazon employees would push up housing prices.

"A lot of communities are now weary of tech booms because of what has happened in the Bay Area," he said.

"The Bay Area's tech boom famously created an influx of tech companies, workers and jobs, but in 2012, it ignited a housing crisis that's made it difficult for many people, especially those in minimum wage or entry-level jobs, to live nearby," explained Kwong, who is also a strategic advisor to the Bay Area Council in San Francisco.

He said many low-income earners are worried about a prospect where they could not afford a home if housing costs skyrocket, and even lose their jobs when Amazon settles in.

Amazon employees at the new headquarters would likely be paid an average salary of at least 150,000 a year, which dwarfs the earnings of many locals in New York.

"The skyrocketing costs in San Francisco show no signs of slowing. Affordable housing remains even more scarce as new tech businesses crop up and exacerbate the issue," Kwong said.

Amazon had planned to split its new headquarters between Long Island City and Crystal City, in Arlington, Virginia.

The US online retail powerhouse disclosed Thursday that it does not intend to search for an alternative site for the second headquarters at this time, but it will continue its plans for Northern Virginia and Nashville.

Kwong said Virginia has already passed a law granting Amazon up to 750 million US dollars in state incentives over the next 15 years, on condition that it create 37,850 new jobs over that period.

"You have to be tough to make it in New York City. We gave Amazon the opportunity to be a good neighbor and do business in the greatest city in the world. Instead of working with the community, Amazon threw away that opportunity," the mayor tweeted after Amazon announced its drop-out plan.

"If Amazon can't recognize what that's worth, its competitors will," the mayor tweeted.

Meanwhile, New York State Governor Andrew Cuomo denounced the New York State Senate in a statement, saying that they should be "held accountable for this lost economic opportunity."

"A small group politicians put their own narrow political interests above their community ... the state's economic future and the best interests of the people of this state," he said, without identifying any specific parties.

In 2017, Amazon announced it was looking for a second headquarters, and pitted more than 200 cities against each other to woo its huge investment.