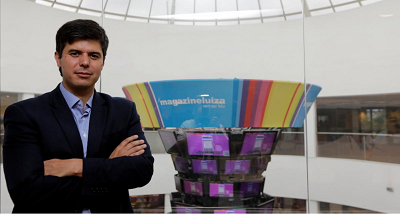 She swallowed her doubts and hit the “buy” button. Two days later she picked up her first-ever online purchase at a mall in Sao Paulo.

“I took the risk,” said Oliveira, who cleans offices for a living. “If I have any trouble with it, at least I know I can come back to the store.”

A reassuring physical presence and fast-growing online sales have vaulted Magazine Luiza into the upper echelons of Brazilian e-commerce, lifting shares over 500 percent last year and 20 percent so far in 2018.

The company is relying on deep roots in its home turf to survive an assault by Amazon.com Inc, which is revving up operations in Latin America’s largest economy six years after entering the market.

Reuters has reported that Amazon is eyeing a major warehouse outside Sao Paulo, negotiating a nationwide air cargo deal and lining up local suppliers of everything from personal electronics to perfume and home appliances.

But the American giant may struggle to dominate retail in Brazil as it has elsewhere, according to a dozen executives, analysts and investors interviewed by Reuters. They compare the state of Brazilian e-commerce to that of the U.S. market 10 years ago — only Amazon’s slow rollout here gave rivals a chance to prepare.

Helped by Brazil’s richest man and search giant Google, competitors are copying many of Amazon’s signature moves. Those strategies have sped up delivery, earned customer loyalty and boosted offerings through partnerships with third-party sellers. And unlike Amazon, home-grown players such as Magazine Luiza have decades of experience with the country’s working-class consumers and tangles of red tape — key survival skills in Brazil’s retail jungle.

“We see room for several players,” said Eduardo Carlier, a fund manager at AZ Quest Investimentos, a major shareholder in Magazine Luiza. “We think the winner-take-all model that played out in the United States is going to be tempered in Brazil.”

With a population of more than 200 million people, Brazil is key to Amazon’s global expansion plans. But as in China and India, where it ran into strong competition, Amazon is playing catch-up in Brazil.

Amazon entered Brazil quietly in 2012, peddling e-readers, books and then streaming movies in a fast-growing e-commerce market that has since doubled to $20 billion.

Like a predator lurking at the edges of the market, Amazon has kept competitors uneasy, wondering when it would attack their core business.

They got their answer in October, when the world’s largest online retailer opened a Brazilian marketplace for third-party sellers of an array of physical products.

Yet all three rebounded quickly in the following weeks. Their shares have continued to climb this year as Brazil’s economy picks up and the companies employ strategies that could have been ripped from Amazon’s own playbook.

Brazilian billionaire Jorge Paulo Lemann and partners at 3G Capital, the investment firm behind the Kraft Heinz Co merger, have invested heavily in B2W through its brick-and-mortar parent Lojas Americanas SA. Their backing has let B2W spend aggressively on in-house logistics, a third-party marketplace and efforts to integrate operations with Lojas Americanas.

In a cheeky move, B2W uses the name “Prime” for its shopping club offering fast shipping for annual membership fees, the same moniker used by Amazon for a similar service in other markets. Amazon uses “Prime” only for its streaming video offerings in Brazil.

Another online rival, MercadoLibre, was founded in Buenos Aires two decades ago to replicate the eBay Inc marketplace model across Latin America. It has held its own against Amazon in Mexico and leads the Brazilian market in online sales, according to market research firm Euromonitor. Its Brazil unit grew 80 percent last year, providing nearly 60 percent of net revenue.

Brazilian retailers are also getting an assist from Silicon Valley. Alphabet Inc’s Google briefed its Brazilian advertisers last year on Amazon’s forays into markets such as India and Mexico to help them prepare, two people with knowledge of the matter said.

Google’s head of retail in Brazil, Claudia Sciama, acknowledged that Brazilian clients had been asking what a ramp-up by Amazon could mean.

“What we’ve done is an exploratory study to understand how they might enter different markets,” Sciama said. She declined to provide details.

Few Brazilian retailers have done as much to reinvent themselves in recent years as Magazine Luiza.

Founded six decades ago as a gift shop in the shoemaking hub of Franca, in Sao Paulo state, the unpretentious retailer became a national player in the 1990s selling appliances, furniture and electronics on credit to poor families ignored by bigger chains.

Chairwoman Luiza Trajano started on the sales floor as a teenager and in 1991 took over the company founded by her aunt. She steered it to a public listing in 2011, expanding operations to more than 800 locations across the country at present.

Yet Magazine Luiza’s digital leap, with her son at the helm, may be the most dramatic transformation yet. Frederico Trajano launched e-commerce operations in 2000 and has made it the company’s central focus since becoming CEO in January 2016.

Magazine Luiza plans to open about 100 new stores this year, up from nearly 60 in 2017, according to two people familiar with the matter. The company has said it may open more stores in 2018 than last year.

For Trajano, those outlets form the backbone of his digital strategy, putting inventory closer to consumers and cutting the cost of storage and order processing.

Trajano said fulfillment consumes up to 15 percent of Brazilian e-commerce revenue, compared to as little as 8 percent in the United States, due to Brazil’s lousy infrastructure, high borrowing costs and lower levels of automation.

Each new store is “a free distribution center,” Trajano said in an interview at Magazine Luiza’s unassuming headquarters by a highway in Sao Paulo.

“Why do you think Amazon bought Whole Foods?” he said.

To be sure, Trajano’s vision of seamless integration between e-commerce and physical stores is a work in progress.

When shopper Oliveira went to fetch her sandwich press, she joined a line of impatient customers waiting at the Aricanduva shopping mall on the gritty east side of Sao Paulo.

In the back room, Magazine Luiza staff hunted for her order on shelves piled with plates, shampoo, microwaves and tires. On a February analyst call, Trajano acknowledged the company’s stores need to be better retrofitted to handle the flow of online orders.

Magazine Luiza is also sharpening its home delivery operation. The company has around 1,500 dedicated truckers running its own app, updating routes and communicating with sellers, warehouses, stores and customers in real time.

Trajano lauds Amazon founder Jeff Bezos as “the best CEO in the world,” but said his company will face a steep learning curve in Brazil, given its notoriously tough business climate.

Case in point: Brazilian consumers have long paid sales taxes on online purchases, unlike in the United States, where internet commerce got a break in its early years.

“If there’s one thing the Brazilian government knows how to do, it’s collect taxes,” Trajano said.