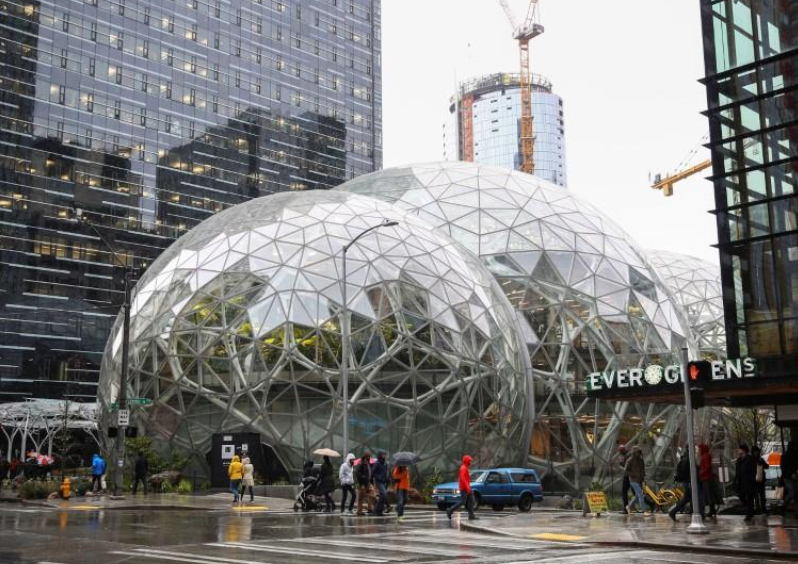 The Amazon Spheres are seen from 6th Avenue at Amazon's Seattle headquarters in Seattle, Washington, US, January 29, 2018. (Photo: Reuters)

Amazon.com Inc said it has halted planning for a new office building in Seattle and might sub-lease rather than occupy another future tower downtown, pending a city council vote on a proposed tax on top businesses.

Amazon’s decision puts a question mark on more than 7,000 new jobs at those buildings that council members might be loathe to cost the city. Construction work and other businesses that would have catered to the world’s largest online retailer could be at risk too.

“Pending the outcome of the head tax vote by City Council, Amazon has paused all construction planning on our Block 18 project in downtown Seattle and is evaluating options to sub-lease all space in our recently leased Rainer Square building,” Amazon’s Vice President Drew Herdener said in a statement.

The council is scheduled to vote on the proposal on May 14.

“I’m deeply concerned about the impact this (Amazon’s)decision will have on a large range of jobs,” the Seattle Times quoted Mayor Jenny Durkan as saying on Wednesday.

Durkan’s office did not immediately respond to a Reuters request for comment.

Communities across North America are vying for a similar investment from Amazon. Amazon has said it will spend more than $5 billion and create up to 50,000 jobs in the city it chooses for its second headquarters, to be announced this year.

The proposal, an employee hours tax that would transition to a payroll tax in 2021, would generate $75 million per year for Seattle, most of which would go to building affordable housing.

The efficacy of the specific proposal is unclear.

Seattle has almost doubled its funding for affordable housing and homeless services programs since 2013 to $63 million per year, according to the report in the Seattle Times.