Amazon is 2nd US company to reach $1 trillion market value 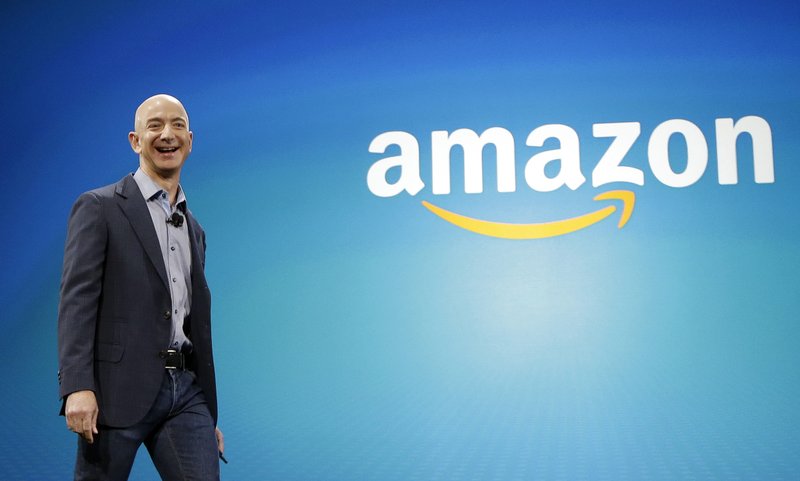 Amazon on Tuesday became the second publicly traded company to reach $1 trillion in market value, hot on the heels of iPhone maker Apple.

The milestone is another sign of Amazon’s swift rise from an online bookseller to a behemoth that sells toilet paper, TVs and just about anything. In its two decades, Amazon has expanded far beyond online shopping and into health care, advertising and cloud computing.

Its growth has boosted the fortunes of its founder and CEO, Jeff Bezos. His 16 percent stake in Amazon is now worth more than $160 billion. Forbes magazine placed him at the top of its list of billionaires for the first time this year, surpassing Microsoft co-founder Bill Gates and investor Warren Buffett.

Amazon’s stock has increased almost 600 percent in the last five years, including a more than 70 percent surge so far in 2018 alone. On Tuesday morning, the stock climbed enough to push the company’s valuation pass the $1 trillion mark, although it dropped back slightly after that. The stock closed at $2,039.51 Tuesday, about $11 short of keeping its valuation above $1 trillion.

Apple topped the $1 trillion mark in early August. Saudi Arabia’s national energy company, Aramco, is widely believed to be worth much more than either Amazon or Apple.

Amazon’s growing power has made it a target of politicians. President Donald Trump has said the company should pay the US Postal Service more in shipping costs. And US Senator Bernie Sanders has frequently noted the disparity between what Amazon’s warehouse workers make and Bezos’ vast fortune. Amazon has remained publicly silent about Trump’s criticism, but has called Sanders’ comments “misleading.”

Bezos started Amazon after leaving a hedge fund in 1994. He called Amazon the “Earth’s biggest bookstore” at the time, but it quickly added more products and eventually opened up a marketplace where others could list and sell their goods.

Amazon has cemented customer loyalty through its Prime membership program, offering fast, free shipping as well as music and video streaming perks. In April, Bezos disclosed for the first time that Amazon had more than 100 million paying Prime members around the world.

Wall Street has become very enthusiastic about Amazon’s businesses outside of retail. Amazon Web Services provides cloud computing services to companies and governments, and Amazon’s advertising division makes billions by selling ads to companies that want their products to show up when shoppers search on the site.

Those profitable businesses have helped offset the high costs associated with running its online store. Amazon saw its quarterly profit soar past $2 billion for the first time earlier this year as the online shopping, cloud computing and advertising businesses all kept growing.

Amazon is also building its physical presence: Its purchase last year of the Whole Foods grocery chain gave it hundreds of stores at which to promote its gadgets and offer discounts tied to Prime memberships. It has opened more than a dozen brick-and-mortar bookstores, and has plans for more cashier-less Amazon Go convenience stores.

It’s also been trying to have more control over how its packages are delivered. Under a program announced this summer, contractors around the country can launch businesses that deliver Amazon packages. The move gives Amazon more ways to ship its packages to shoppers without having to rely on UPS, FedEx and other delivery services.

Amazon’s latest push has been in the health care industry. It has formed a venture with JPMorgan Chase and Berkshire Hathaway to figure out ways to attack rising health care costs for their US employees and possibly for many more Americans. It also announced plans to buy the online pharmacy PillPack, but hasn’t revealed what it plans to do with it.