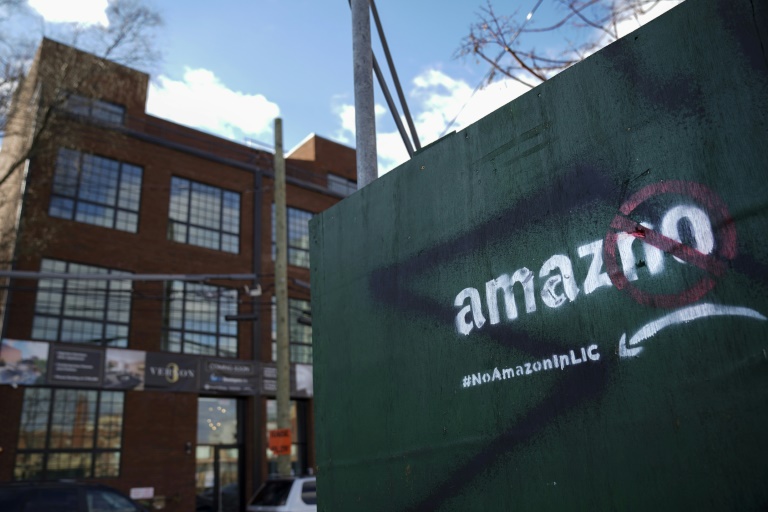 Amazon's plan to locate a headquarters in New York City has sparked protests, but satte Governor Andrew Cuomo repeated his support for the plan. (Photo: AFP)

Amazon is rethinking its decision to create an additional headquarters in New York City amid opposition from key political leaders and protests in the community, The Washington Post reported Friday.

The Post, which is owned by Amazon founder Jeff Bezos, cited two sources familiar with the company who spoke on condition of anonymity.

The report comes after the appointment of an Amazon critic to an oversight board with the potential to veto the deal for one of two locations selected by Amazon for its "HQ2," along with a site near Washington.

They voiced concerns that the promised 25,000 jobs could inflate an already overpriced housing market and strain infrastructure.

The plan announced last year was backed by New York Governor Andrew Cuomo and the city's Mayor Bill de Blasio, but has been the object of demonstrations in the following weeks.

Critics claim the deal offers too many subsidies to one of the world's largest companies, led by the world's richest man. Some surveys meanwhile have suggested the Amazon HQ plan is supported by residents.

Amazon did not directly address the report but said it was focused on engaging with its future neighbors.

"Whether it's building a pipeline of local jobs through workforce training or funding computer science classes for thousands of New York City students, we are working hard to demonstrate what kind of neighbor we will be," the company told AFP.

It's not clear what Amazon would do if it dropped the plan for New York. It has won approval for a location in the Virginia suburbs of the US capital as it outgrows its headquarters in Seattle, Washington.

At a news conference Friday, Cuomo said opposition is led by "a very small group of politicians who are pandering to the local politics" and repeated his support for the Amazon deal.

But Stuart Appelbaum of the Retail, Wholesale and Department Store Union, said Amazon had failed to address concerns voiced about the plan.

"If the Amazon deal falls apart, they will have nobody to blame but themselves," Appelbaum said. "A major problem is the way the deal was put together shrouded in secrecy and ignoring what New Yorkers want and need."