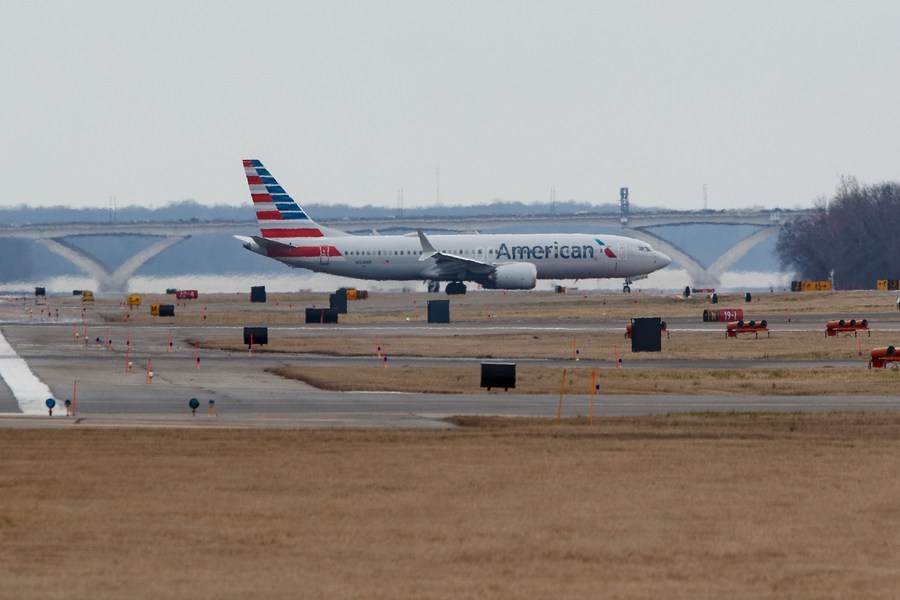 American Airlines on Tuesday flew a Boeing 737 Max from Miami to New York with paying passengers on board, making the first commercial flight almost 2 years after the worldwide grounding of the troubled aircraft.

American flight 718 carried about 100 passengers and landed Tuesday afternoon at LaGuardia Airport, according to an airline spokeswoman.

Boeing's 737 MAX jets have been grounded across the globe since early March last year following more evidence emerging indicated that its key flight control software played a part in two deadly air crashes in less than one year.

The U.S. Federal Aviation Administration (FAA) in November this year rescinded the order that halted commercial operations of Boeing 737 MAX, a move that allowed airlines under the FAA's jurisdiction, including those in the United States, to take the steps necessary to resume service and Boeing to begin making deliveries.

American Airlines said after resuming the scheduled service with one round trip from Miami to New York through Jan. 4, it expected to "gradually phase more 737 MAX aircraft into revenue service throughout January, with up to 36 departures from our Miami hub depending on the day of the week."

Passengers on all of American Airlines' Max flights will be given advance warning, with the option to rebook, the airlines said.

"If a customer doesn't want to fly on the 737 MAX, they won't have to... We'll provide flexibility to ensure they can be easily re-accommodated," the company said in an earlier statement.

United Airlines also plans to resume the 737 Max from Feb. 11, 2021, and Southwest, the largest operator of 737 Max jets, is scheduled to reintroduce the plane "no sooner than the second quarter of 2021," according to a notice on its website.

In a new Reuters/Ipsos opinion poll released on Monday, 57 percent of Americans said they were not likely to fly in a Boeing 737 Max when told of the plane's history, while 37 percent said they would be likely to fly after it's returned in service for more than six months.

In this September, an investigative report from the U.S. House Committee on Transportation and Infrastructure (House T&I Committee) Report on 737 MAX concluded the committee's 18-month investigation of the design, development and certification of the 737 MAX aircraft, and related matters.

According to the report, the investigation has revealed multiple missed opportunities that could have turned the trajectory of the MAX's design and development toward a safer course due to flawed technical design criteria, faulty assumptions about pilot response times, and production pressures.

U.S. Senator Roger Wicker, chairman of the Senate Committee on Commerce, Science, and Transportation on Dec. 18 released the Committee's investigation report on the FAA.

"Boeing is committed to improving aviation safety, strengthening our safety culture, and rebuilding trust with our customers, regulators, and the flying public," the company said in a statement on the release of the report, adding that it has learned hard lessons from the Lion Air Flight 610 and Ethiopian Flight 302 accidents.

Boeing's 737 MAX jets have been grounded across the globe since March 2019. China was the first country in the world to suspend all Boeing 737 Max 8 airplanes and more than 40 countries including Singapore, Australia, and the European Union, Canada, and the United States followed suit. In addition, some countries have closed their airspace to the plane.