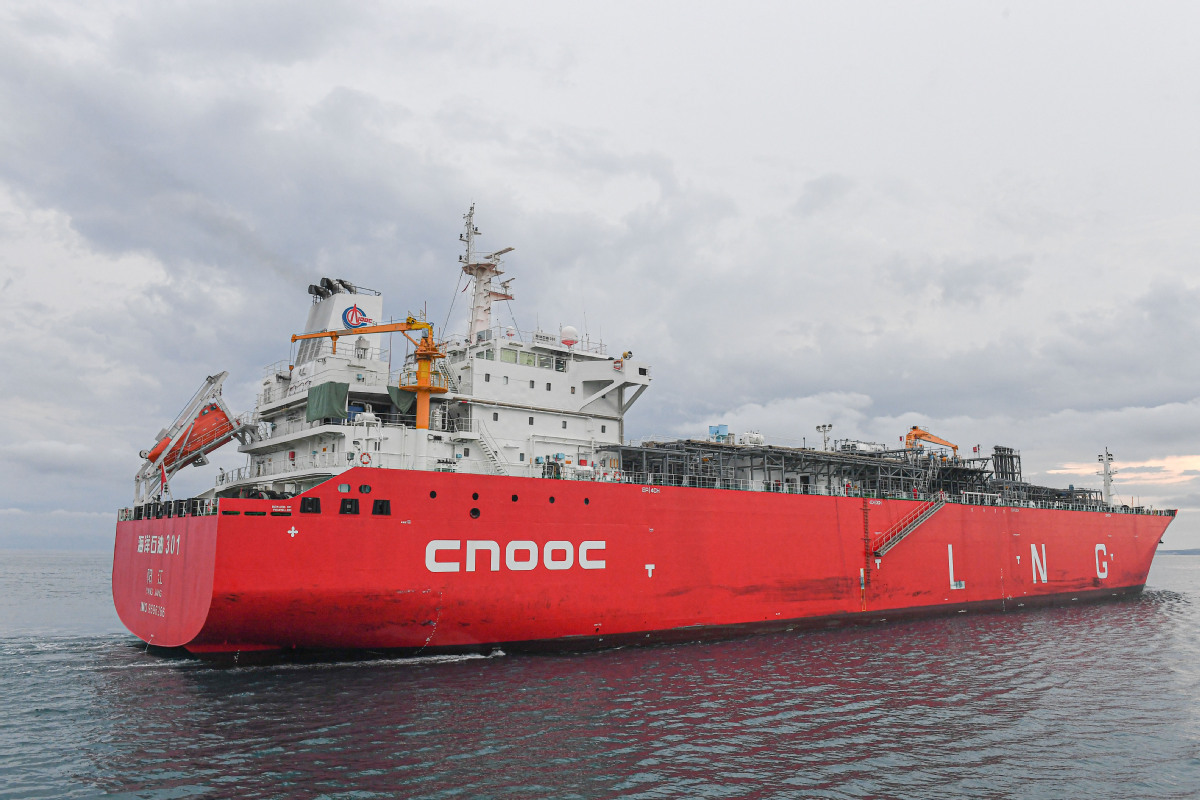 A CNOOC LNG tanker is seen off Hainan province in September 2020. (Photo provided to China Daily)

The vessels will be built by Shanghai-based Hudong-Zhonghua Shipbuilding (Group) Co Ltd, a subsidiary of China State Shipbuilding Corp Ltd. These LNG tankers are scheduled to be delivered to the shipowner by 2028. The carriers will be engaged mainly in transport of LNG, procured by ENN under a long-term purchase contract, to China.

MOL offered more than $240 million but less than $250 million for each 174,000-cubic-meter LNG carriers, according to information released by eworldship.com, a Shanghai-based platform focusing on marine businesses.

Despite the high costs involved in building such vessels, China should build a fleet of LNG carriers to ensure its energy security and encourage State-owned, private and foreign companies to jointly invest in purchasing LNG tankers, said Yu Peng, an analyst at Beijing Petroleum Exchange.

China's LNG imports are mainly based on the seller's onshore delivery, and its orders' transportation schedules are in the hands of global resource suppliers such as US LNG exporter Cheniere Energy LNG Inc, British energy group BP plc and QatarEnergy.

Compared with other major energy importing countries such as Germany, Japan and the Republic of Korea, the nation's LNG transportation autonomy is relatively weak, said Wu Yugen, deputy director of the research center of oil and gas resources of the Ministry of Natural Resources.

Building LNG carriers requires technology more advanced than what is used to make conventional storage tanks. Such carriers should be able to store LNG at an extremely cold temperature and are mostly powered by steam turbines. Only a few countries, including China, the Republic of Korea and Japan are able to build such high-end carriers.

The size of the global LNG tanker fleet expanded from 642 ships by the end of 2020 to 700 by the end of 2021, according to information released by the Beijing-based China Association of the National Shipbuilding Industry.

China has increasingly shifted its energy sources from coal and oil to natural gas in response to growing awareness of the need for a low-carbon, decarbonized society. The country became the world's largest LNG importer for the first time in 2021.

The nation's LNG demand is expected to grow even more in the future, according to a report from the transport planning and research institute of the Ministry of Transport.