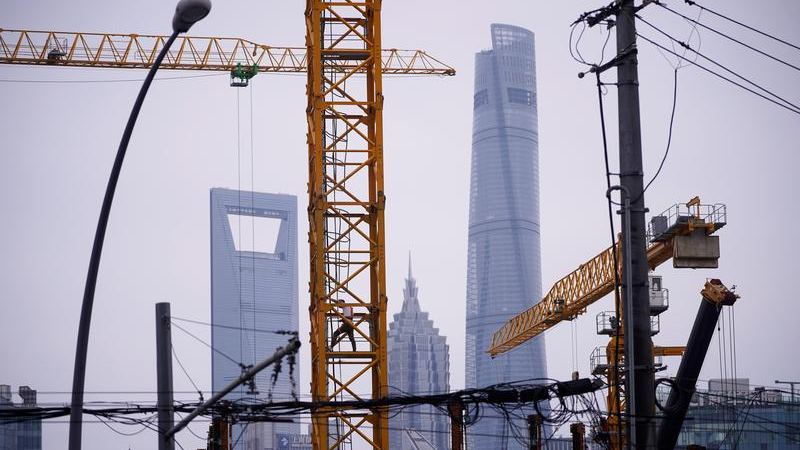 China's stronger-than-expected 2020 growth again signals that the country is speeding up expansion and will continue to lead the world's economic recovery from COVID-19.

The second-largest economy's gross domestic product (GDP) increased by 6.5 percent in the fourth quarter of 2020, official data showed on Monday. The full-year GDP, which rose by 2.3 percent compared to previous year, exceeded 100 trillion yuan ($15.45 trillion) for the first time.

However, the data also showed some risk, as the recovery on consumption lagged behind and some COVID-19 cases reemerged in northern Chinese cities.

CGTN reached out to several economists and analysts to get their comments on China's economic performance in 2020. The following are excerpts from the interviews and statements. They have been edited for clarity and brevity.

The GDP data shows that the economy has almost normalized. This momentum will continue, although the current COVID-19 outbreak in a couple of provinces in northern China might temporarily cause fluctuation.

Private consumption is still the weakest link. With current stimulus policies from the State Council, such as promoting rural car sales, consumption will maintain the current recovery momentum. However, significant improvement in consumption will be difficult until we see sustained employment expansion.

We expect China's economy will grow by 8.7 percent in 2021. The external sector (industries that export) will continue to make significant contributions to growth, as vaccine rollout and the recovery of global demand will benefit China's manufacturing.

Challenges maintain as small companies face the disproportional impacts from the slowdown of monetary easing. If not handled properly by the authorities, bad debt issues could add pressures to regional banks at the local level.

Hong Hao, chief strategist at the Bank of Communications International:

'Upstream strength will continue to pass on to downstream sectors'

I think we're seeing strength in the tertiary output and very strong momentum in the upstream cyclical sectors. Also, the export sector is [strong] because the virus is still being contained in the overseas market. I think, for now, China is probably one of the only few factories that is still running for the world, and it's supplying to the global demand.

Going into the second half of last year, the Chinese economy went into recovery mode. We've seen upstream strength for now, and I think the upstream strength will continue to pass on to downstream sectors such as consumption.

I think consumption is in part affected by some of these sporadic cases. But, at the same time, since consumption is a downstream sector, which will potentially recover toward the end of the recovery phase, I think once we've seen the upstream sector fully recover, we will see the momentum pass on downstream. 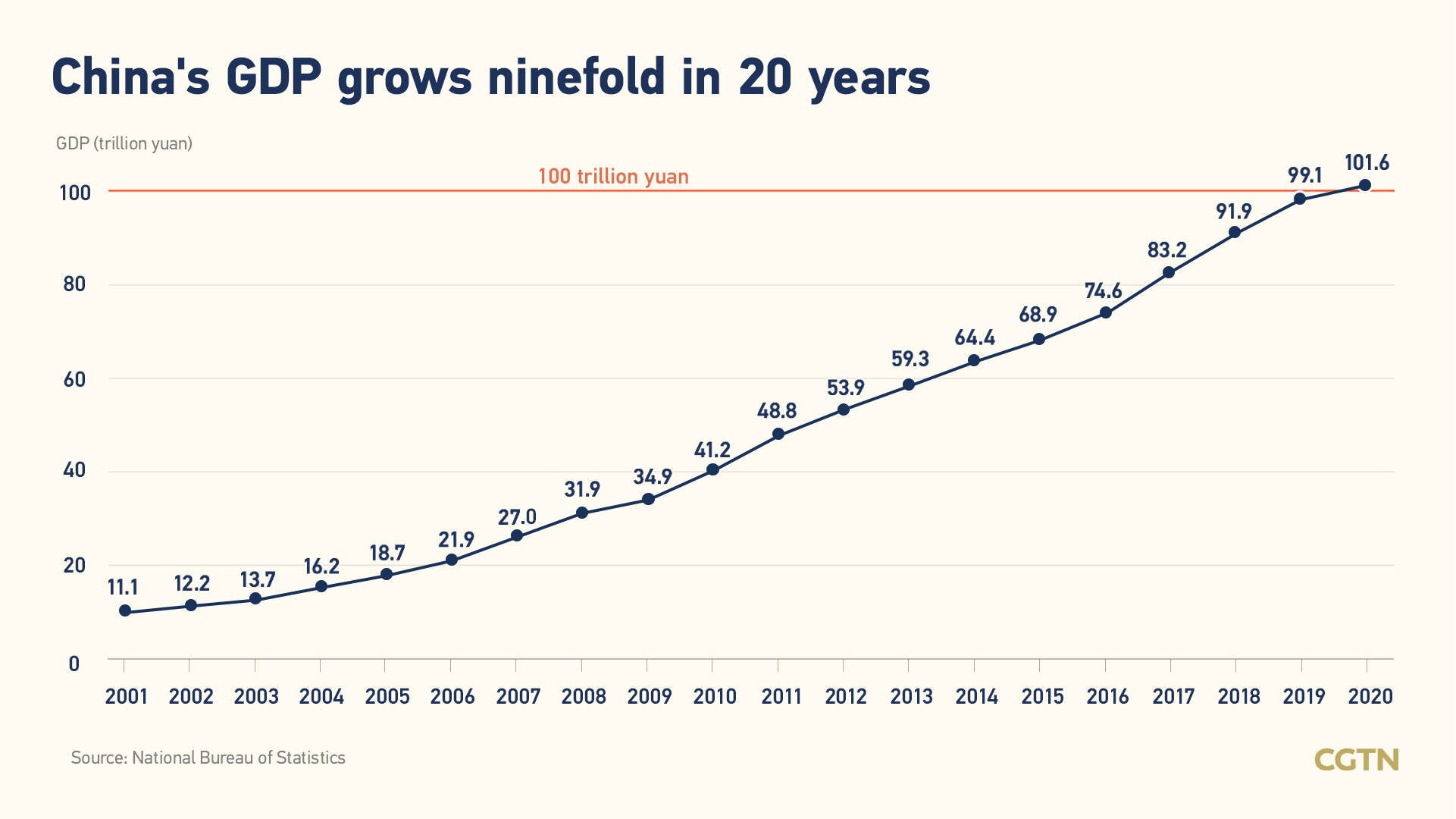 'Rebooting domestic consumption will be a challenge'

We expect the export sector to keep up the strong momentum as the global economy starts to pick up. The expected $1.9-trillion stimulus package in the U.S. is likely to bring extra demand for Chinese goods.

Yet rebooting domestic consumption will be a challenge with uncertainties in the job market. While wage growth slowed down in 2020, transferred income has accelerated for households. We anticipate that more targeted consumer subsidies will materialize in the first quarter to bolster domestic demand, such as in the form of the central bank digital currency.

Agriculture is a highlight in the 2020 industrial performance. Grains saw a bumper harvest for most crops, with the exception of corn. The inventory of hogs and sows has surged, indicating a forthcoming downward trend in the pork price cycle. We do not see any immediate threat to China's food supply or general food security.

'China on path to surpass U.S. as the world largest economy'

China achieved great economic success. The credit for this belongs just as much to the public health officials as to the economists. China's pandemic fighting strategy used its own proverb, "Better to take a sharp pain than a long pain." It worked.

This result marks further progress along China's trajectory to becoming the world's largest economy. China's GDP was 66.9 percent of U.S. levels in 2019. The United States hasn't released its 2020 GDP yet, but a contraction of 3.5 percent is the current bet. If so, that puts China's GDP at 75 percent of the U.S. already – and on a path to surpass it in less than a decade.

I have an optimistic outlook for China's economy in 2021 but still see downside risk from a possible COVID-19 reemergence, especially in the first quarter. But overall, I'd expect several times faster growth in 2021 than we saw in 2020. 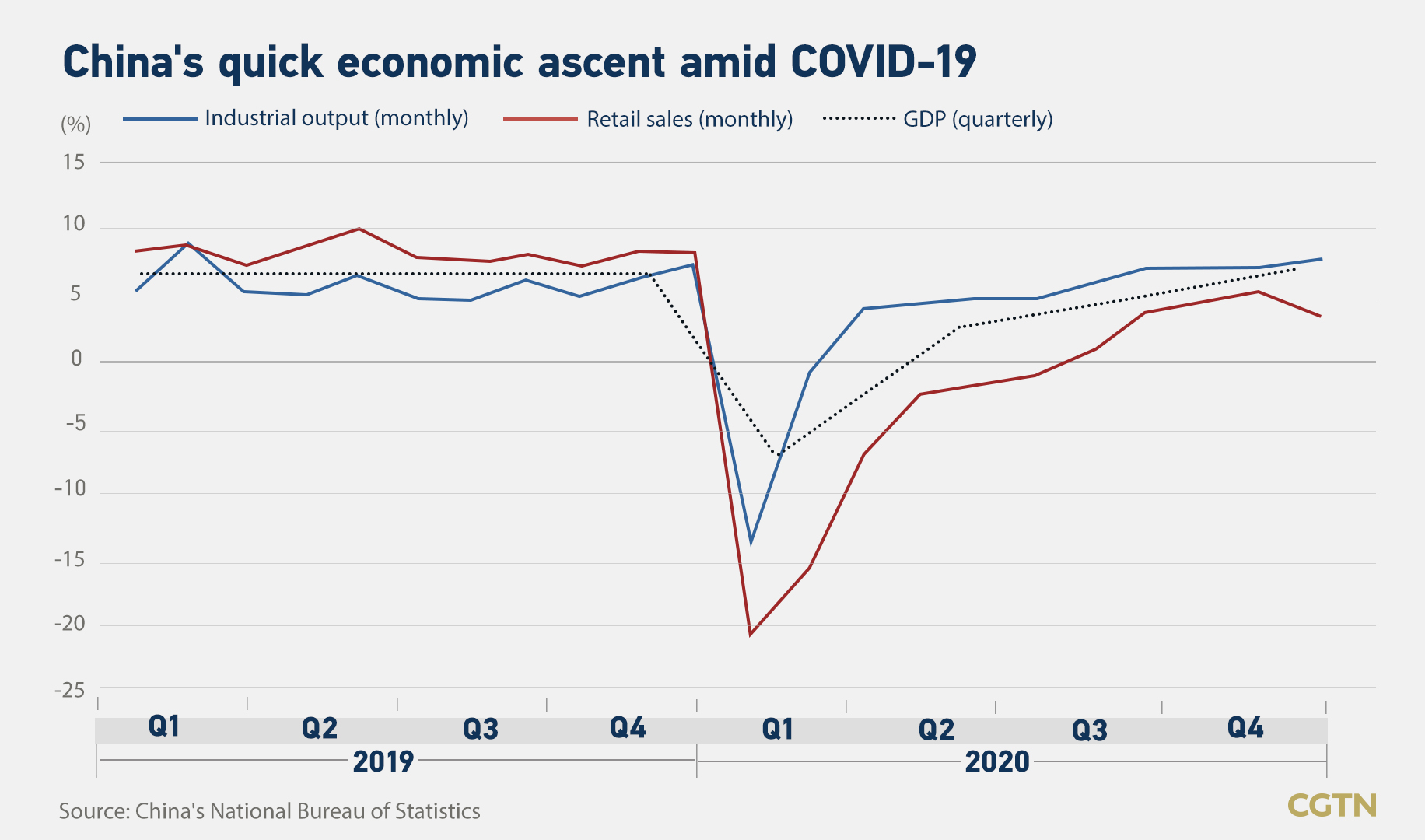 The 2.3-percent GDP growth is, of course, great. No doubt. However, I still want to focus on its unbalanced nature, which justifies the continuation of demand reform.

Household demand is not really back. Retail sales only grew 4.6 percent in December, which means negative 3.9 percent for the year.

Bear in mind that fast digitalization, which showed in retail sales growing at 10.9 percent in December, is making excess capacity in commercial real estate an even bigger problem. Also, the trade surplus is too large for the current geopolitical tensions.

In a nutshell, China's GDP growth is welcome, but it masks relevant imbalances.

'China's central bank will slow its normalization at the margin'

We expect the impact on Beijing's policy stance from stronger-than-expected GDP growth in the fourth quarter to be limited. Since mid-2020, the growth recovery has been solid, and Beijing has recognized that policy normalization should be planned well ahead; thus, credit growth was already slowing in November and December.

Due to the global resurgence of COVID-19 and the worsening COVID-19 situation in China, Beijing is also fully aware of the high level of uncertainty. We believe Beijing will maintain its pledge to avoid any sharp shift in policies. Its normalization pace will thus be highly contingent on the COVID-19 situation. With the re-imposition of lockdowns and travel bans due to the most recent wave of the coronavirus, we think the People's Bank of China will slow its normalization at the margin.