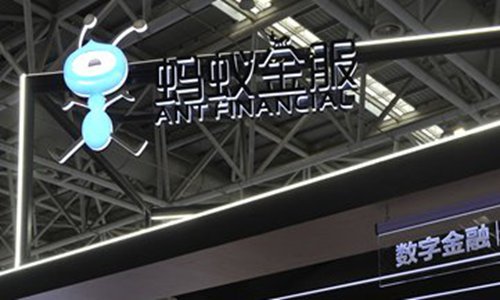 The move could mean more difficulties ahead for Ant Group's micro-lending platforms to issue such financial product in near future as the nation is tightening regulation on the business, analysts told the Global Times.

One bond, worth 10 billion yuan ($1.52 billion), was issued by the platform that operates Jiebei, a short-term consumer loan provider which uses Alibaba's payment tool Alipay. And the issue started to be handled on November 20 2020, according to the website of SSE. The other ABS, worth 8 billion yuan, issued by the platform that operates Huabei, which provides services like a virtual credit card via Alipay, started to be handled on October 29 2020.

Both units are based in the Southwest China's Chongqing Municipality. The companies form the bulk of Ant's credit business which accounted for close to 40 percent of its revenue in the first half of 2020, media reports said.

Dong Dengxin, director of the Finance and Securities Institute of Wuhan University, told the Global Times on Tuesday that Chinese regulators are taking a discreet and cautious approach toward fintech giants over their sprawling consumer loans.

"The move also revealed precautions that regulators take to prevent any monopoly," said Dong, adding that the difficulty of Ant's ABS issues is likely to mount.

Data from Financial China Information & Technology Co showed that Ant has issued a total of 728.6 billion yuan of corporate bonds.

ABS is a financing instrument via which a wide range of assets such as loans, real estate and toll ways can be converted into tradable bond-like securities.

An industry insider surnamed Li told the Global Times that Ant's online lending business scale will shrink without the debts being approved, and its leverage ratio will also come down, which is in line with the requirements for a financial holding company.

Ant will apply to transform itself into a financial holding company as part of a multifaceted rectification plan that touches on various aspects of the firm's businesses, including payment and consumer data, Pan Gongsheng, deputy governor of the People's Bank of China, said in a statement in April, after top financial regulators summoned the fintech giant for another regulatory talk over its problematic financial business practices.

Ant has been rectifying its financial business. Since the interview with regulators in December 2020, Ant has established a special task force to draw up a rectification plan which is supervised by the regulators.