BUSINESS Apple fails to present iPhone 12 due to 'strategic mistake' in 5G: analyst

Apple fails to present iPhone 12 due to 'strategic mistake' in 5G: analyst 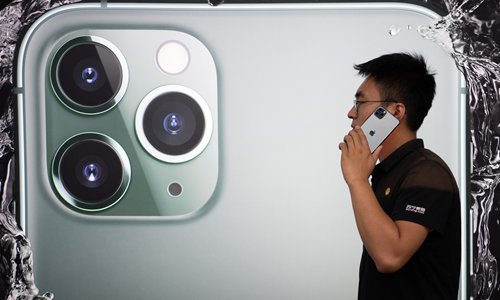 A man tries the new iPhone 11 at an Apple store in Taiyuan, North China's Shanxi Province on Friday. (Photo: IC)

Apple held its fall promotional event on Tuesday, introducing a series of new products including an Apple Watch and an iPad. However, the much-awaited iPhone 12 was missing at the event.

Liang Zhenpeng, a senior industry analyst, told the Global Times on Wednesday that he believes the main reason for iPhone 12 disappearance was the company's strategic mistake in the 5G field.

In July, Apple said the new phone would be late by "a few weeks" more than usual. Alongside its usual system updates and better exterior design, analysts speculated that the main addition would likely be 5G connection.

"The company wrongly judged that the 5G mobile phone market could not flourish, and it has not made enough technical research in the 5G field, while other mainstream mobile phone manufacturers including Huawei and Samsung have launched 5G mobile phones since the second half of last year," said Liang.

Apple's fall announcement is its biggest event of the year among China's tech-savvy young customers, but without a new iPhone, the event drew much less attention from these customers than in previous years. On Wednesday, "iPhone 12 is not released" was a top trending topic on Weibo.

Many said that a fall announcement without a new iPhone release was not worth watching, noting that they used to stay up all night awaiting Apple's new releases, which usually were scheduled at midnight (Beijing time).

Lily Jiang, a Beijing resident, told the Global Times that she's been waiting to change her two-year-old iPhone 8 plus into the latest iPhone, but if it doesn't come out soon there are other options.

"I buy iPhones out of habit, but if the new iPhone 12 doesn't come out soon I might consider buying Huawei's 5G phones. Many of my friends say it's decent."

The disappointment was reflected in Apple's shares. The price rose more than 3 percent before the event but fell 1 percent after the event, which lasted for only an hour.

Compared with Chinese smartphone makers, Apple is lagging in its 5G phone release, and uncertainties in its 5G supply chain pose a huge question mark over its position in the Chinese market.

The market share for iPhones in China fell to the fifth place in the second quarter, trailing four domestic brands including Huawei, vivo, Oppo and Xiaomi. Its share dropped to 8 percent from 9 percent in the first quarter, according to Counterpoint, a market research firm.

Disruptions in the interconnected global supply chain and US-China trade friction have complicated 5G deployment for both Apple and Huawei. Some observers suggested that if Apple launches 5G iPhones, it will have to pay royalties to Huawei, which holds more than 3,000 5G essential patents, the highest among mobile phone producers. Its technology is also the most mature.

"Apple doesn't have the strength to compete with Huawei in the field of 5G," said Liang. However, in order to catch up, he thinks that Apple could release the iPhone12 before the end of the year.

Huawei has released several 5G handsets since last year, and more than 93 million of its 5G smartphones have been sold this year, according to statistics from the China Academy of Information and Communications Technology, a government think tank.

However, the company has been besieged by the intensifying US crackdowns. Its major 5G chip providers, including US-based Qualcomm and Taiwan Semiconductor Manufacturing Co have been prohibited from supplying Huawei.

Although the delay in the launch of the iPhone 12 has no particular connection with the US ban on Huawei, which took effect on the same day on Tuesday, Liang said that Huawei also needs to speed up finding other chip suppliers, since the shipment of its high-end mobile phones could be affected months after the ban.