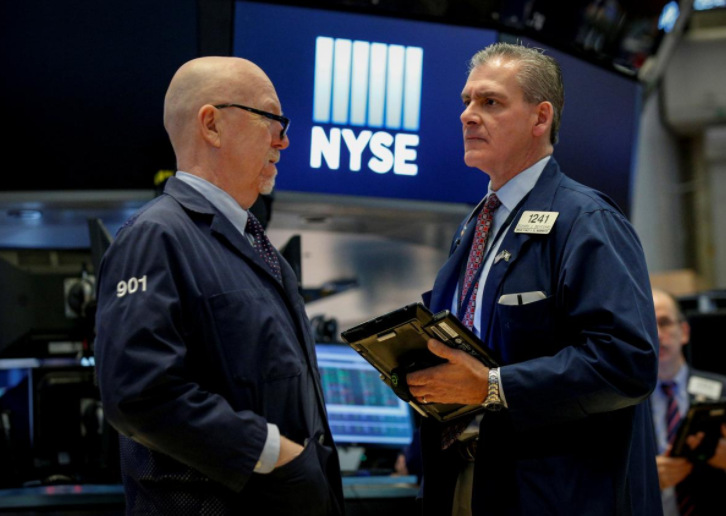 Traders work on the floor of the New York Stock Exchange (NYSE) in New York, US, January 26, 2018. Photo: REUTERS/Brendan McDermid

US stocks pulled back sharply on Monday from record levels last week, with the Dow falling more than 100 points, weighed down by Apple after a media report added to concerns about demand for the iPhone X.

Apple (AAPL.O) shares fell as much as 2.6 percent after the Nikkei reported the company will halve the production target for its flagship iPhone X this quarter. Apple is due to report results on Thursday.

The technology sector’s .SPLRCT 0.50 percent drop weighed the most on the markets, but the biggest decliners were the defensive sectors – utilities, real estate and telecoms, all down more than 0.8 percent as US 10-year treasury yields hit their highest since 2014. [US/]

“Today’s movement is just a bit of profit taking after last week and ahead of a very busy week,” said Randy Frederick, vice president of trading and derivatives for Charles Schwab in Austin, Texas.

Beside a host of earnings reports, this week includes US President Donald Trump’s State of the Union address, the Federal Reserve’s monetary policy meeting and the US jobs report.

“The earning season has been pretty good so far and guidance, for the most part, has been strong, which should support equities,” Frederick said.

Strong corporate results have pushed up analysts estimates for S&P 500 fourth-quarter earnings growth to 13.2 percent, from 12 percent at the start of the year, according to Thomson Reuters data, and help send Wall Street on its best four-week run since 2016.

But the blistering pace of the S&P’s 7-percent rally this year up to Friday’s close has also driven up the anxiety factor in the market, in a break with history.

The CBOE Volatility Index .VIX, the main gauge to measure fears of a near-term drop, was 12.98, its highest since Dec. 1.

Besides rising yields, telecom stocks were also hit by reports that the US government was planning to build a super-fast 5G wireless network to counter China’s spying on calls.

Dr Pepper Snapple Group (DPS.N) soared as much as 32.4 percent to an all-time high after K-cup maker Keurig Green Mountain said it will buy the soda maker in a deal worth more than $21 billion.

Wynn Resorts (WYNN.O) fell 7.7 percent after the company said it is forming a committee to investigate sexual misconduct allegations against CEO Steve Wynn.