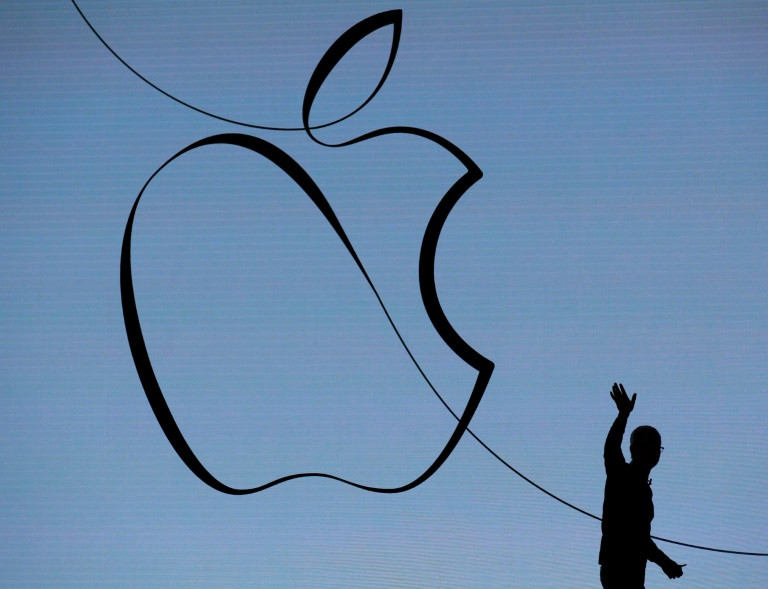 Apple CEO Tim Cook said the iPhone maker had its best March quarter ever with strong sales across products and regions (Photo: AFP)

Apple reported a hefty jump in second-quarter earnings Tuesday and unveiled a new $100 billion share buyback plan, alleviating worries about the iPhone's prospects and a hit from US-China trade tensions.

Apple shares rose decisively after the report, which beat analyst expectations in terms of profit and sales. The company notched higher revenues in all regions and across most product categories, although iPhone sales lagged expectations.

Apple chief executive Tim Cook offered a bullish outlook on the company, touting the company's product pipeline as the "best we've ever had" and championing good sales of the iPhone 10, a recently unveiled model whose $1,000 price tag has aroused worries about being too high.

Earnings for the quarter ending March 31 rose 25.3 percent rise in earnings to $13.8 billion following 15.6 percent increase in revenues to $61.1 billion.

The company, flush with a huge cash pile on strong earnings enhanced by the US tax cut plan of 2017, announced $100 billion in new share buybacks plus a 16 percent boost to its quarterly dividend.

Chief financial officer Luca Maestri told an analyst conference call that the company would undertake the share purchases at "a very fast pace," but that the schedule would depend on market dynamics.

Analysts especially praised a big jump in revenues in Apple's services business, which is seen as an important element of diversification away from having revenues tied to gadgets.

A 31 percent rise in services to $9.2 billion followed big jumps in Apple Pay, Apple Music and other programs.

Angelo Zino, analyst at CFRA Research said the gain was evidence of "significant increase in paid subscriptions within (Apple's) ecosystem."

Sales of iPhones, which account for nearly two-thirds of company revenues, rose during the quarter, although total volume came in at 52.2 million units, a bit below consensus estimates of 53 million.

Neil Saunders, managing director of Global Data Retail, pointed to "some less satisfactory nuances" in the Apple's iPhone data in spite of the positive headline figure.

"That unit growth is well below the run rate for new phone launches, signals that the replacement cycle is slowing down," Saunders said. "In essence, we maintain our view that Apple is struggling to persuade many consumers to update their phones."

"No matter how Apple tries to spin it, the iPhone X is essentially an incremental product that lacks the excitement and newness earlier models brought to the market," Saunders said.

But Cook noted that the iPhone 10 was its topseller during the quarter, including in key markets like China, saying "I could not be prouder of the product."

"I don't buy the view that the market is saturated," Cook said.

Apple has been seen as vulnerable to in the wake of intensifying rhetoric and threats between Washington and Beijing that have raised worries of a trade war.

Cook downplayed anxiety about a commercial meltdown between the two superpowers, saying the countries have an "unavoidable mutuality" based on economic interdependence.

"I don't know how every blow by blow plays out," he said, but "over time" he expects his "very optimistic" outlook on the long-term relationship would be validated.

Analysts were encouraged by Apple's third-quarter outlook, which included projected revenues of $51.5 billion to $53.5 billion, implying it could top analyst forecasts for $52.0 billion.