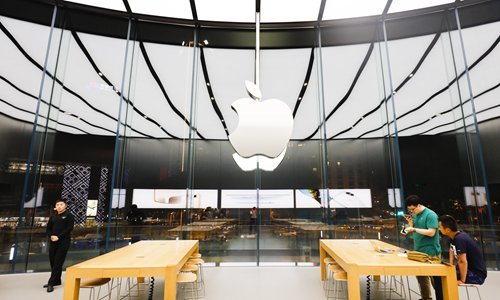 Apple Inc's first 5G smartphone - the iPhone 12 has recorded over 1.7 million reservations on Chinese e-commerce platforms for its presale starting at 8 pm Beijing time on Friday, largely in line with previous performances and expectations despite its late arrival to the 5G phone market.

However, Chinese consumers are noticeably less excited about the new device with some calling its features and innovation rather disappointing and experts are pessimistic about the phone's prospect in the Chinese market, where competition from local Chinese brands are fierece.

Among the Chinese e-commerce platforms that were open for the reservation, JD.com reported over 1.61 million reservations and Suning recorded 140,000 as of 2 pm. Data from another major online mall Taobao is not available as of press time on Friday.

The previous series iPhone 11 also recorded over a million reservations within one day in Chinese mainland in 2019. The iPhone 12 also appeared to have received a warm welcome by consumers on the island of Taiwan, where pre-order quota was booked out within 45 minutes, according to media reports.

"The 1.7 million number of reservations was generally within expectation and not a surprisingly high number," Xiang Ligang, director-general of the Beijing-based Information Consumption Alliance, told the Global Times on Friday.

And the number of reservations is not a sufficient gauge for overall sales forecasts, since it is free and generally the number of actual payments will be much lower, Xiang noted.

Apple unveiled its first 5G series much later than its rivals, including China-based Huawei and South Korean-based Samsung. According to Chinese news site thepaper.com, at least 112 5G handsets had been released before the iPhone 12.

As Apple unveiled its 5G series about one year after Chinese brands, its 5G related capacity still remains to be seen, Xiang said. "Given an insufficient coverage of 5G network and the lack of complex test scenarios in the US, it is hard for Apple to develop a 5G capacity as advanced as Huawei, not to mention that Huawei can conduct coordination of its own 5G stations and terminal products."

It is impossible for the new iPhone to develop a 5G-related capacity at the same level as Huawei handsets, Xiang said.

Rather than a 5G series, the iPhone 12 is more like a 4G+ version, due to its lack of functional innovation specifically for 5G, Ma Jihua, a veteran industry analyst, told the Global Times.

Several generations later than Chinese brands Huawei and Xiaomi, the long-awaited iPhone with discouraging highlights revealed that it has lagged far behind in terms of innovation, Ma said.

Many customers planning to buy the new iPhone series also stressed their habituation for using the products, instead of being inspired by any innovative functions.

But a Shenzhen resident named Maple Shi told the Global Times that "not only will I not buy the iPhone 12, but my journey of using iPhones may even end with iPhone X."

With 5G smartphones entering a phase of rapid expansion, it is better to choose one with more advanced capabilities, such as Huawei, Shi said.

The new iPhone series may still see fair sales in the Chinese mainland since Apple has gained a loyal following. However, with years of declining market share in China, iPhone may see a dimmer prospect in China due to its relatively high pricing strategy and lack of advance and unique features, according to Xiang.