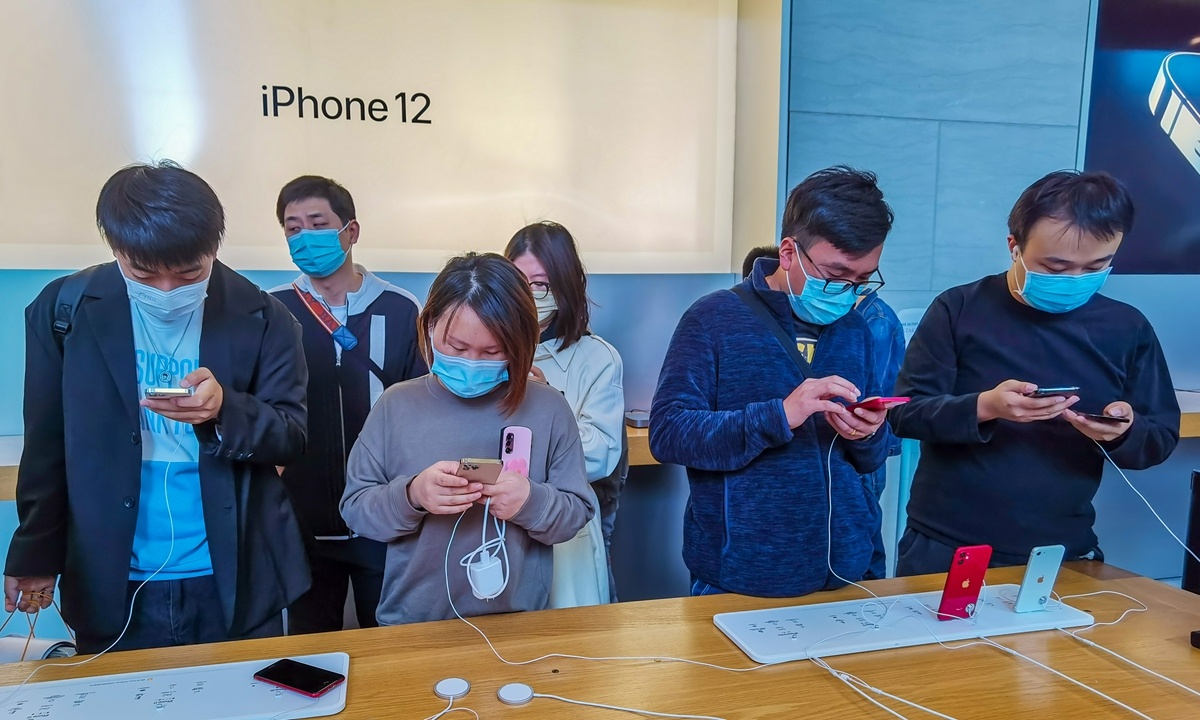 People shop at an Apple store in Shanghai on October 23 after iPhone 12 was newly launched. (Photo: Global Times/cnsphoto)

Apple's iPhone 13 lineup, which will be unveiled on Tuesday (US time) during the company's annual fall event, is expected to witness an order boom in China, the world's largest smartphone market, but it will be hard to sustain strong sales into the first quarter of 2022, industry analysts told the Global Times on Monday.

Chinese mobile operators and e-commerce platforms have already warmed up by opening pre-order channels ahead of the official launch. Major carrier China Mobile set an ultra-low threshold to make an appointment - with just 1 yuan ($0.15), consumers can get an Apple charging head.

"The reason for the fast response from operators is that they want to accelerate the pace of 5G construction, which has become a battleground that operators race to seize," an industry analyst surnamed Liu told the Global Times on Monday.

China Mobile has set its 5G goal for 2021, which is to achieve desirable 5G coverage in cities, counties and some key towns across the country.

In the high-end 5G smartphone segment, domestic vendor Huawei has been crippled by the US in its 5G layout, while other domestic handset manufacturers are unable to launch influential products, the analyst noted.

The anticipated strength of the iPhone 13 demand is likely to see Apple account for one-third of global 5G smartphone shipments in 2021. Demand for this year's iPhone lineup will be high even without any surprising new features, according to a forecast made by market research firm Counterpoint.

Despite possible price hikes, shipments of the iPhone 13 series are estimated to increase by 10 percent compared with those of the iPhone 12 series in the same period of this year, according to Kuo.

Foxconn, the Apple supplier, has being ratcheting up its recruitment of new assembly line workers at its manufacturing hub in Zhengzhou, capital of Central China's Henan Province to boost iPhone 13 output, the Global Times learned.

Sun Yanbiao, head of Shenzhen-based research firm N1mobile, told the Global Times on Monday that the iPhone 13 series is likely to become the top smartphone in the Chinese market in terms of sales after it is launched, but the boom probably won't be sustained until the first quarter of 2022.

"The iPhone 12 series has maintained its position as the No.1 in sales in the global market for half a year, thanks to the design of the mobile phone, but the iPhone 13 has changed very little as far I know, so the heat won't last long," Sun noted.

According to a report by market research firm Canalys, Apple held a 10 percent share in the second quarter of this year in the domestic smartphone market with 7.9 million devices shipped, ranking fourth after Vivo, Oppo and Xiaomi.