BUSINESS Apple's woes unnerve supply chain, may cause shake-ups in China's use and division of labor

Apple's woes unnerve supply chain, may cause shake-ups in China's use and division of labor

Apple's earnings warning, coupled with an announcement of weak iPhone sales, sent shivers down to global markets and are set to shake the business of some of its suppliers based in China, possibly affecting jobs in some localities, analysts said on Sunday. 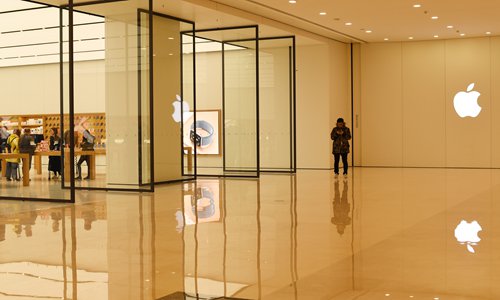 However, Apple's troubles will have a limited short-term impact on China-based suppliers, analysts said.

On Wednesday, Apple CEO Tim Cook told CNBC in an interview "[Apple's] shortfall is over 100 percent from iPhone and it's primarily in China."

The statement sent chills across capital markets, hurting Apple suppliers based in China. For example, Hong Kong-listed AAC Technologies, which has plants in Shenzhen, South China's Guangdong Province, saw its shares fall about 10 percent from Wednesday to Friday in response to Apple's news. The company kicked off a share buyback program to shore up the price.

Another iPhone supplier, Sunny Optical Technology (Group) Co, based in Ningbo, East China's Zhejiang Province, was downgraded from "Buy" to "Neutral" by Bank of America Merrill Lynch, according to financial news site www.aastocks.com on Friday.

Chinese analysts noted that the impact of weak iPhone sales would be felt, but to a limited degree.

The nation's smartphone market will be still growing, so the reported weak iPhone sales will have a limited impact on suppliers, Fu Liang, a Beijing-based telecom industry expert, told the Global Times on Sunday.

"There will be some hard times for suppliers that are over-reliant on Apple, and this incident will teach them the value of diversification," Fu said.

Zhang Yue, an independent analyst, said Hon Hai Precision Industry Co, better known as Foxconn and a supplier of Apple's iPhones, will certainly be affected by the weak iPhone sales.

"Fewer orders from Apple could translate into fewer jobs at its plant," Zhang said, noting that Foxconn might still escape with little damage as its drive in recent years to eliminate human jobs through automation could offset the impact of weak iPhone orders on its profitability.

Foxconn is reportedly using only about 45 production lines, although it had nearly 60 assembly lines prepared for Apple's XR model, according to media reports in November.

In Zhengzhou, capital of Central China's Henan Province, where Foxconn has an iPhone complex that employs 250,000 people, the job market has cooled for seasonal reasons. But it's also been affected by poor sales of Apple's three latest models, according to a post on a Sina blog on December 31.

Analysts said such relocations would be a potential concern for China's job market, which means that the nation must nurture domestic brands to achieve a lasting solution.

"Foreign brands will leave when they deem fit. You cannot help it because China does not have sway in the division of labor in this supply chain," Cong Yi, a professor at the Tianjin University of Finance and Economics, told the Global Times on Sunday.

"What China can do is to achieve dominance in the division of labor in the smartphone supply chain, by forging an industry cluster based on its vast home market," Cong said. "Only domestic brands can help with this government-led drive."

Foxconn, which works like an independent black box, is not contributing to local industrial cluster buildup, according to jigongzhanlüe, an influential Sina Weibo account in December.

The market share Apple that lost was taken by some domestic smartphone brands such as Vivo and Oppo, and these brands are still making their devices in China, albeit from different locations than Foxconn. Assembly-line workers might have to shift to other cities for jobs, causing a labor force migration, Zhang said.

According to a report by Sino Market Research in October, Vivo led in shipments in China with 20.62 million units in the third quarter of 2018. Apple ranked No.6, behind Oppo, Huawei and Xiaomi, with 10.54 million units shipped, down 16 percent from the same period in 2017.

"If these domestic brands can tap the potential of new markets such as Europe and Asia, demand for making smartphones in China will still grow regardless of the performance of Apple's iPhones," Zhang said.