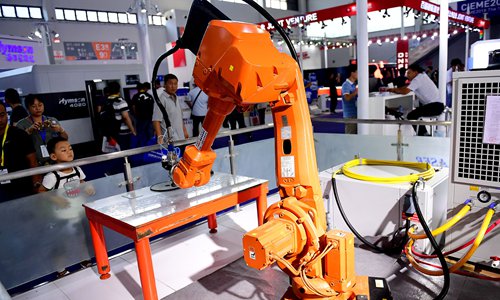 A view of a Han's Laser booth at an exhibition in Shenyang, capital of Northeast China's Liaoning Province in September 2018. (Photo: VCG)

Apple's key suppliers in China are undergoing a painful transition to ease their reliance on the US technology company as iPhone sales woes erode their profitability and the ongoing China-US war casts shadows over working with an American company.

While some have already turned to domestic handset makers such as Huawei to replace dwindling orders from Apple, industry observers said those suppliers could strike gold in other opportunities in China associated with fast-growing strategic industries such as 5G.

Apple's main Chinese suppliers, including Han's Laser, Lens Technology and Ofilm, have released their first-half results, and all showed profit slumps due to Apple's waning sales.

That was a sharp contrast to its performance in 2016, when the company's cooperation with Apple was in a honeymoon period and Apple utilized laser equipment in more than 70 percent of its production facilities. In a filing to the stock exchange, Han's Laser said the first-half results reflected shrinking orders amid a "recession in consumer electronics" and a more cautious approach on spending by clients amid China-US trade friction.

Protective panel producer Lens, which gained renown in the A-share market because of its long-term partnership with Apple, reported disappointing results. In an estimate sent to the Shenzhen Stock Exchange in mid-July, Lens said its first-half loss would be between 12.38 million yuan and 16.96 million yuan.

"Working with Apple used to be a boon for Chinese suppliers, but now they're losing as Apple's sales slow," Liu Dingding, a Beijing-based veteran industry analyst, told the Global Times.

Industry observers said that Chinese suppliers used to be heavily reliant on orders from Apple, which could generate more than 60 percent of their revenue. Some even structured their businesses around Apple's demands, so Apple's waning sales will continue to weigh on their ability to make a profit.

Its iPhone sales fell 12 percent to $25.99 billion globally during that period.

Chinese suppliers agree that it's time to ease their reliance on Apple and diversify their product lines.

Among Apple's top 200 suppliers in the world, 86 are from China. Breaking the total down, 46 of them are Taiwanese suppliers, 30 are from the Chinese mainland and 10 are from Hong Kong, according to Apple's 2019 supplier list.

"Overreliance on Apple is risky not only because of falling orders. Apple will also slash its procurement prices with suppliers to maintain profitability, which will further squeeze suppliers' profit margins. Most of these Chinese companies are hardware device producers that lack bargaining power," an industry insider, who asked not to be identified, told the Global Times.

Chinese suppliers are also concerned about how the tit-for-tat tariff war between the world's two largest economies will affect bilateral confidence in cooperation and the yuan's exchange rate, Wang Ying, a senior analyst with Beijing-based research company Analysys, told the Global Times.

They could be at risk of being replaced by foreign rivals, and they don't want to survive at the mercy of the US government, the insiders said.

Sun Yanbiao, head of Shenzhen-based research company N1mobile, told the Global Times that some Chinese suppliers who have strong supply chains and capacity have shifted their focus from Apple to domestic smartphone markers such as Huawei, Vivo, OPPO and Xiaomi. Huawei was the biggest smartphone vendor in China in terms of shipments in the second quarter. "Now, if they lose orders from Apple, domestic smartphone makers can fill the gap immediately," Sun said.

Lens Chairman Zhou Qunfei said that Huawei replaced Apple as the company's largest client in the first quarter of 2019, after Lens adjusted its client structure to emphasize developing its domestic business.

But at the initial stage, tailoring parts and equipment for different devices of domestic vendors will inevitably drive up costs, the anonymous source said. "Only after this painstaking process could those Chinese suppliers capitalize on the domestic market."

The arrival of the 5G era has also sent a positive sign to Chinese suppliers. They should seize the opportunities and explore new sectors as biological recognition and 3D sensing, Wang said.

For example, there will be explosive growth in demand for printed circuit boards (PCBs) in the 5G era, as 5G applications including autonomous driving call for larger volumes of PCBs than in the 4G era. That trend bodes well for Han's Laser, which recorded a 39 percent growth in income from PCBs last year, analysts said.