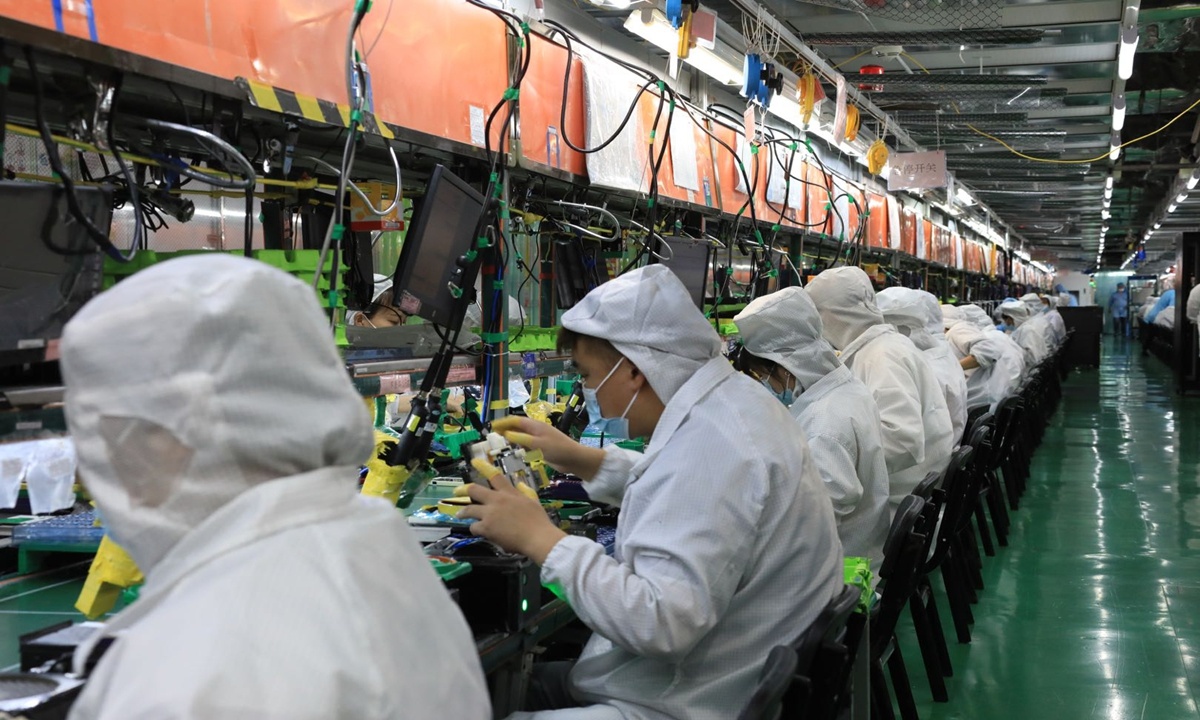 Workers at a production workshop of Foxconn's technology park in Zhengzhou, Central China's Henan Province on July 24, 2021. The park is a major global smartphone manufacturing base. (Photo: VCG)

Apple's original design manufacturers (ODM) in the Chinese mainland are facing labor shortages and ramping up efforts to hire more workers with higher bonuses for new recruits ahead of the expected launch of its new iPhone series in September.

Industry insiders said that the unprecedented high bonuses have laid bare the labor shortage, which could eventually raise the prices of new products, including the upcoming iPhone series.

Several plants of Foxconn are offering one-time bonuses between 6,000 yuan ($925.8) to 12,000 yuan for new recruits for different locations and production lines.

A manager at the Foxcon plant in Shenzhen, South China's Guangdong Province, told the Global Times on Wednesday the company raised the bonus for successful candidates from 4,000 yuan to 6,300 yuan last week, which is the highest on record.

The plant entered the peak period for recruitment several months ago, but it is still facing a labor shortage as the new product launch comes near.

The highest bonus is at the plants in Chengdu, Southwest China's Sichuan Province, which are offering new candidates around 12,000 yuan as a one-time bonus after they work for a certain period of time, sources said. The plants are also making iPhones.

Despite the higher bonuses, labor shortages remain serious. "We are expecting to hire as many workers as possible. There is no limit at the moment," said the manager with Foxconn, noting that at least thousands more workers are needed, especially for the production lines for Apple products.

Other factories including those in Zhengzhou, Central China's Henan Province and Taiyuan in Northeast China's Shanxi Province are also looking for more workers.

The difficulty in finding enough workers is adding fuel to the competition among Apple's ODM factories. Another supplier, Luxshare Precision Industry, quickly doubled its referral commission when it received orders for the iPhone13, according to media reports.

The production disruption at Foxconn plants in Vietnam due to the outbreak of the COVID-19 has also affected output, which led to certain supply chain to shift back to the Chinese mainland, where the epidemic is under relatively stable control.

However, given the ongoing labor shortages, combined with production disruptions due to the epidemic in Vietnam and sporadic outbreaks in some parts of China, tightened chip supplies and other raw materials, industry insiders fear that the new iPhone series may not be delivered in sufficient numbers or on time.

"Due to the epidemic situation and other factors, Foxconn has difficulty in recruiting workers, which will partly affect production capacity, and shipments may be lower than expected," Luffy Lin, chief analyst at Witdisplay, an electronics device consulting platform, told the Global Times on Wednesday, noting that the shipment delays can't be ruled out.

Also, because of higher costs for labor, raw materials and other inputs, the price of the new iPhone13 may be higher than that of other new products in previous years, Lin predicted.

"The price will only remain unchanged if Apple is 'kind enough' to cover the extra costs," said Lin.