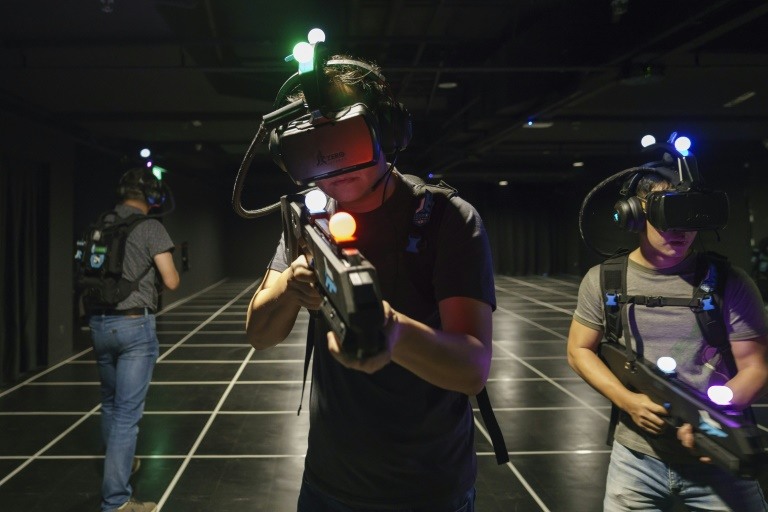 Virtual reality has been slow to really take off, partly due to the hefty price of top-end headsets and the challenges in setting up complex systems at home (Photo:AFP)

The virtual reality arcade in Singapore is part of a wave of such venues being opened as backers of the technology seek to shake off teething problems and break into the mainstream.

The buzz around virtual reality (VR) gaming has seen Taiwan-based HTC, Sony and Facebook-owned Oculus VR battling to woo consumers with a range of headgear.

But it has been slow to really take off, partly due to the hefty price of top-end headsets, beginning at around $350, and the challenges in setting up complex VR systems at home.

But VR arcades, which have been springing up around the world, particularly in Asia, are now giving people the chance to try it out more easily and for a fraction of the price.

Several VR gaming companies have made forays into Singapore, seeing the ultra-modern, affluent city-state that is home to hordes of expatriates as a good fit.

The zombie fight-out was taking place at a centre where participants stalked a room with a black floor and walls.

“I did paintball before, it’s quite fun... but I think the whole scene is much more interesting here,” said Jack Backx, a 55-year-old from the Netherlands, who was playing with colleagues from the oil and gas industry on a work day out.

The location is run by VR gaming group Zero Latency, which started in Australia and has expanded to nine countries. It uses "free-roam" virtual reality -- where gamers move around in large spaces and are not tethered to computers with cables.

It's not all intense, shoot-'em-ups -- VR group Virtual Room has an outlet in Singapore that transports gamers to scenarios in the prehistoric period, a medieval castle, ancient Egypt and even a lunar landing.

VR arcades have been springing up in other places. China was an early hotbed for virtual reality gaming although the industry has struggled in recent times, while they can also be found in countries across the region including Japan, Taiwan and Australia.

Many key industry milestones over the past two years have been in Asia but arcades have appeared elsewhere -- London's first one opened last year while there are also some in the United States.

Consumer spending on virtual reality hardware, software and services is expected to more than double from $2.2 billion in 2017, to $4.5 billion this year, according to gaming intelligence provider SuperData Research.

For the best-quality experience, it can be relatively expensive -- a session in Singapore costs Sg$59 ($45).

"The equipment here is not cheap," said Simon Ogilvie, executive director of Tomorrow Entertainment, which runs the Zero Latency franchise in Singapore.

China offers a cautionary tale -- according to IDC, VR arcades have struggled there after expanding too quickly.

There have also been warnings that improvements in home-based technology may eventually lead to VR gaming centres suffering the same fate as traditional arcades that were once filled with Pac-Man and Street Fighter machines.

"The rise and fall of coin-operated videogame arcades in the 1980s suggests that such VR arcades may eventually fade in relevance as home-based computing power and prices fall within mass consumer reach," said the note from IDC's Ma.

Rebecca Assice, who runs Virtual Room in Singapore, said one challenge was getting people interested in the first place as many still did not know about the arcades.

"VR is still a really new industry," she said. "A lot of people just don't know this sort of activity exists."