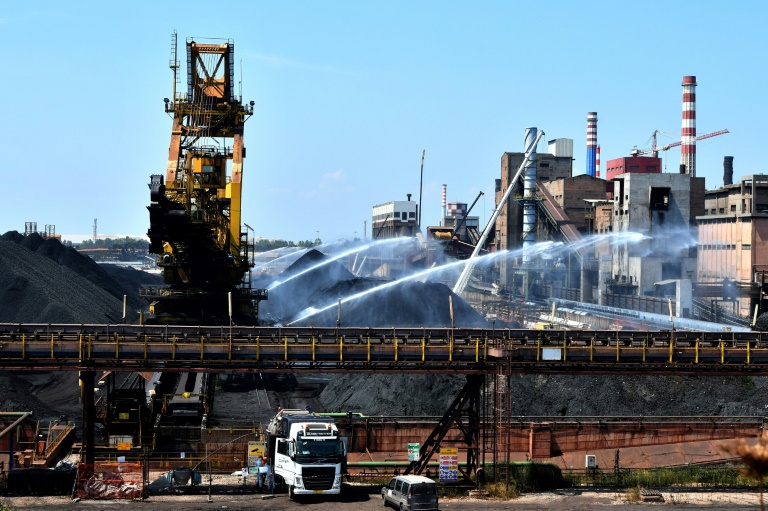 ArcelorMittal had hoped to clean up the former Ilva steel plant in southern Italy that experts believe to have contributed to the death of thousands of people due to toxic emissions. (Photo: AFP)

The Taranto site is at the centre of a huge legal case in which experts cited by prosecutors have said some 7,500 people were killed in the area over seven years by diseases linked to toxic emissions.

The decision by ArcelorMittal sparked outrage across Italy, with trade unions variously blaming the steel giant and the ruling anti-establishment Five Star Movement (M5S), which is a foe of big industry, for pulling the rug out from under the deal which would have safeguarded thousands of jobs.

"We call on the government to intervene and the company to row back its decision," she said on Twitter.

AcelorMittal began leasing the plant -- with an obligation to buy it -- last November and had plans to invest 2.4 billion euros ($2.7 billion) to revive it, including 1.2 billion euros to curb pollution by 2024.

The group was given a period of legal immunity to bring the plant up to environmental standards.

But after toing and froing, the Italian parliament revoked it, and the company lost its immunity on November 3.

ArcelorMittal said it had a contractual right to withdraw from the deal as its ability to operate had been "materially impaired".

ArcelorMittal added that the local criminal court had ordered work that would have been impossible to complete on time, making the closure of a blast furnace inevitable.

"The shutdown would make it impossible for the company to implement its industrial plan, operate the Taranto plant and, generally, perform the agreement," said ArcelorMittal.

Industry Minister Stefano Patuanelli convoked a crisis meeting with fellow ministers in Rome, with sources saying the government "will not allow Ilva to close" and would "immediately summon" ArcelorMittal to the capital.

The company had previously warned removing immunity would force it to throw in the towel, despite having already begun implementing its clean-up plan, which includes enclosing conveyor belts and installing new quenching towers.

The steel plant employs over 8,000 workers in the poverty-hit southern Italian city, which suffers from high unemployment.

While environmentalists and families of cancer victims have long called for the sprawling plant to be shut, many locals had placed their hopes in ArcelorMittal turning it around -- though the company had struggled to win hearts.

The withdrawal could have political consequences for Italy's ruling coalition of the M5S and centre-left Democratic Party.

Italian firebrand Matteo Salvini, head of the popular far-right League, seized the opportunity to rail against the M5S in particular, which has long campaigned for the closure of the steel plant and its transformation into a clean energy park.

The former interior minister slammed it as a "disaster" and called for heads to roll in the corridors of power.

Others, such as left-wing Free and Equal member of parliament Luca Pastorino, accused the company of using the immunity as "a pretext" for quitting because of the crisis in the steel industry.