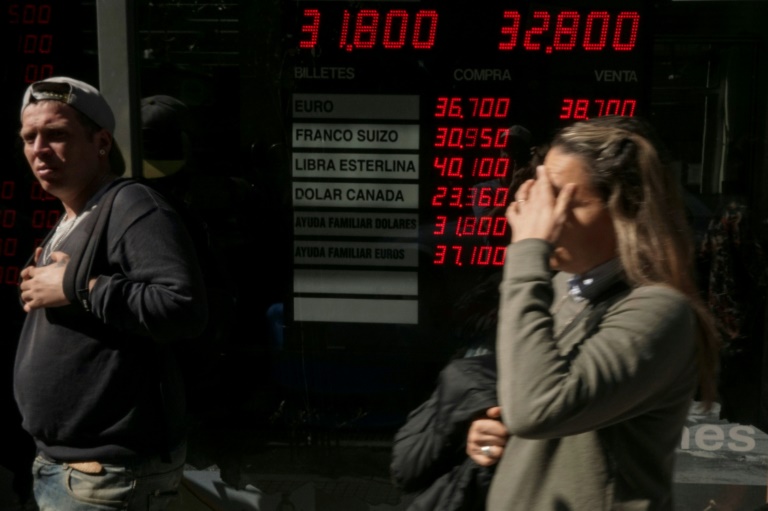 Argentina's Central Bank hiked its benchmark interest rate from 45 to 60 percent on Thursday in a dramatic but fruitless bid to shore up the peso, which plunged to a record low against the dollar.

Despite the bank's extraordinary measure to impose one of the world's highest benchmark rates, the currency lost a further 13.5 percent by the close -- its biggest daily loss of the year.

The Argentine currency has now lost 53 percent of its value since the beginning of the year, to trade at 39.87 to the dollar. It was worth around 18 to the dollar at the start of the year.

But the Merval index on the Buenos Aires stock market jumped 5.34 percent to 26,754.85 points on the back of a 13.5 percent rise in the share price of Brazilian petroleum giant Petrobras.

The weakening peso made stock prices tempting and drove sales.

"We are not facing economic failure," said Pena.

Ratings agency Moody's said the Central Bank's move "is a clear signal that economic policy approaches have not been sufficient to contain the financial pressures facing Argentina."

Macri had on Wednesday unexpectedly requested an acceleration to the IMF funding of $50 million agreed in June.

The government has already drawn down a first tranche of $15 billion -- some of which has been used to try and prop up the peso.

A statement from the president aimed at calming the markets appeared to have done the opposite after his request -- effectively to get early access to the remaining $35 billion of the loan -- sent the peso plummeting almost 7.0 percent by the close.

Despite explicit support from the International Monetary Fund for his policies, the peso opened a further 4.0 percent lower on Thursday -- prompting the Central Bank's intervention.

The bank pledged to keep interest rates unchanged at 60 percent until at least December.

IMF chief Christine Lagarde said on Wednesday she had agreed to Macri's request to speed up disbursement of the loan in a bid to shore up Argentina's battered economy.

In return for IMF support, the government has committed to reducing its budget deficit to 2.7 percent this year, from 3.9 percent in 2017, and to 1.3 percent of GDP next year.

But analysts said the government needs to provide more detail about how it plans to achieve aggressive IMF fiscal targets, if markets are to be assuaged.

On top of that, the government faces a major obstacle in November, when a $7 billion foreign exchange debt repayment is due.

"This will be a key flashpoint," said Edward Glossop, Latin American specialist with Capital Economics.

"Regardless of what happens from here, the country's weak balance sheets mean that Argentine markets will remain extremely vulnerable to swings in investor risk appetite," added Glossop.

Speaking at the opening of the Council of the Americas business chamber in Buenos Aires, Pena attributed the market volatility to Argentina's recent history.

"We are the country that has the most times violated its international contracts in the world, which has lied and cheated the rest of the time, and has shown again and again -- until now -- that it is not willing to seek fiscal balance and depend on its own resources," he said.

He insisted the path taken by Macri, since he took office in December 2015 after the free-spending leftist government of Cristina Kirchner, is one "of fiscal balance, development and growth." 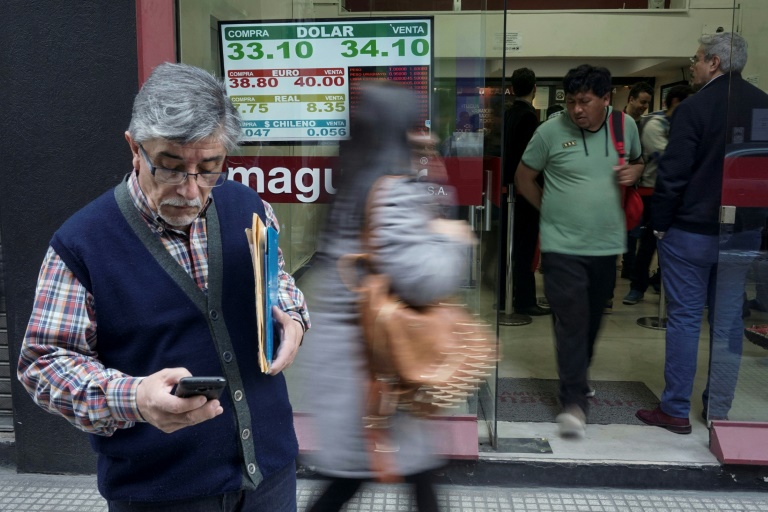 Currency exchange values are displayed at an outlet in Buenos Aires, on August 29, 2018. (Photo: AFP)

The current exchange turbulence was attributable to "structural vulnerabilities" following a massive drought that affected agricultural production, the main generator of foreign currency, and a "change in the financial and commercial context in the world, notably due to tensions between the United States and China," Pena said.

"There are no magic solutions, you have to go for the truth."

Macri had sought to soothe the turbulence in a statement before markets opened on Wednesday, assuring Argentines that help is on the way.

"Over the past week, we have had new expressions of lack of confidence in the markets, especially over our ability to obtain financing for 2019," Macri acknowledged.

He said the IMF would provide "all the funds necessary to guarantee the fulfillment of the financial program next year."