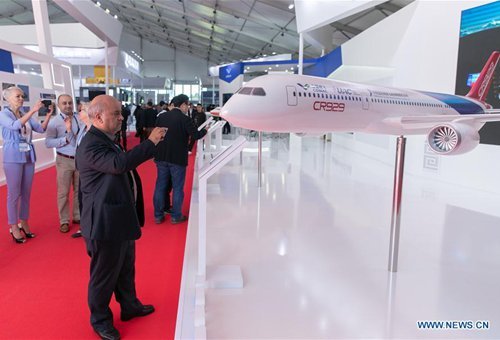 People view a model of CR929 airplane during the international aviation and space salon MAKS 2019 in Zhukovsky, Russia, Aug. 27, 2019. The air show kicked off on Tuesday.(Photo: Xinhua)

Delivery of the CR929 long-haul jetliner jointly developed by China and Russia is moving ahead on schedule, with a total of 1,000 expected to be handed over between 2023 and 2045, chief Chinese designer Chen Yingchun said on Wednesday.

Chen said that the ARJ21 had already been highly successful, with total number of orders exceeding 600 and delivering more than 1.5 million passengers across 36 air routes. Accumulative orders for the C919 have already reached 815, with six planes are carrying out trial flights across four regions.

Jointly developed by China and Russia, the CR929 is 63.3-meter-long and 17.9-meter-high, with a wingspan of 61.2 meters. The weight of a CR929 is about six times of an ARJ21, or three C919 jetliners, Chen said, noting that the air-range of CR929 is as long as 12,000 kilometers, meeting Asia-Pacific and Europe flight requirements if departing from Beijing or Shanghai.

The CR929 is not just a large aircraft, Chen said. Traditionally used complex panels are replaced by large LCD screens that not only reduce maintenance costs, but also make flying safer. The use of advanced composite materials exceeds 50 percent, with use of titanium alloy at 15 percent, he said.

Weighed-down by the impact of the COVID-19 pandemic, the global aviation industry has been through a rough year, including Chinese aircraft manufacturers. This extends to overseas markets where Japan's domestic passenger plane MRJ was forced to be taken off the market due to insufficient orders.

However, according to Chen, the impacts on Chinese aircraft makers are so far manageable and "limited".

Chen said that among the three major projects currently under the responsibility of Commercial Aircraft Corporation of China (COMAC), the 90-seat ARJ21 regional airliner has been a huge success. It has so far received more than 600 orders of aircrafts.

The 150-seat trunk airliner C919 is in the stage of test flight and certification. Currently, six aircrafts are under flying trial tests in four different locations and the orders have reached 815; the 300-seat dual-aisle wide-body passenger aircraft CR929 is also steadily advancing to completion.

He revealed that although the global aviation industry has suffered during the epidemic this year, this situation is only temporary and will not have a long-term impact. The aerospace field generates significant industrial value, but 90 percent of which is from civil aviation and only 10 percent is from aerospace.

"In the field of aviation, civil aviation accounts for up to 90 percent, and most of the profits are concentrated in large-scale mainline passenger aircraft. Therefore, if China can develop a large wide-body passenger aircraft, it means that China will become a powerful aviation manufacturing country," Chen said.

Future market prospects for the Chinese aviation sector are looking positive. According to market forecasts, from 2023 to 2045, the global demand for wide-body passenger aircraft will exceed 10,000, 1840 of which are from the Chinese and Russian market. The expected share of CR929 after delivery is about 1000, accounting for 14.7 percent of the total global wide-body passenger aircraft delivery.

The initial planned delivery amount of CR929 was only 500, a doubling of this figure guarantees positive future development, Chen said, which will expectedly bring in a significant amount of profits in the next few years.

Large passenger aircrafts, such as CR929, represent a big jump ahead in the civil aviation industry, according to Chen. Over the next 20 to 30 years, the wide use of large passenger aircrafts will reduce accidents rate to around 10 percent of the current level, and COMAC has also begun development of upgraded models of CR929, including double-deck dual-channel airliners, three-channel airliners and supersonic airliners, according to Chen.

However, China's current share of global aircrafts market is less than one percent, but Chen said that rapid development of aircraft technology in China is already enhancing its competitiveness, such as in the making of composite materials.

Several provinces and cities along China's developed coastal regions have already initiated their development of aviation manufacturing industry. Yang Fusong, an official from the investment promotion department from Hangzhou, East China's Zhejiang Province said that the city has listed the aviation manufacturing sector as a priority development industry, and is aiming to attract more aircraft making companies.

"With the fast growth of the passenger demand, it will also need more producers to join the supply chain in order to improve efficiency," Chen told the Global Times.