As bitcoin gyrates, less euphoria in evidence at blockchain gathering 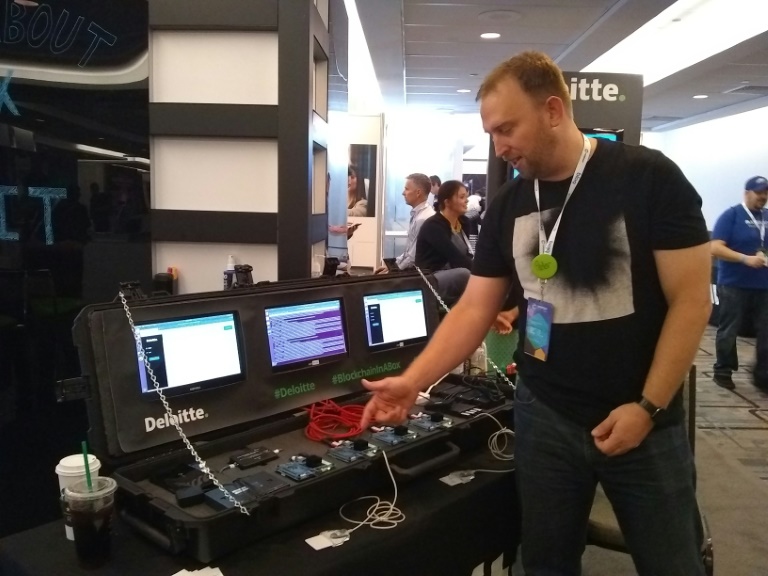 Deloitte demonstrated blockchain-based cybersecurity technology at the Consensus 2019 conference in New York on May 15, 2019.(Photo: AFP)

The vibe at a gathering this week for blockchain enthusiasts felt decidedly less exuberant than its predecessor a year ago after dizzying swings in bitcoin.

Despite bitcoin's latest bounce, this year's gathering, again held at a hotel in New York, featured less ostentatious displays of wealth and a more sober sensibility.

The shift is partly a reflection of bitcoin's dramatic price swings, as well as a sign of the evolution of blockchain technology into more real-life, less trendy applications.

"It's definitely less buzz, less show," said Wes Fuldord, chief executive at Bitfarms Technologies, a cryptomining operation based in Quebec. "But it's reflecting signs of a more mature market."

Blockchain is a digital ledger that is the underlying technology of bitcoin with broad applications in finance and many industries that permit multiple users to share data and information in real time. The technology is considered secure because the data cannot be altered.

"In 2018, we just had a lot of powerpoint presentations," recalled Francois-Xavier Thoorens, founder of blockchain company Ark. "This year, we have real products."

Display stands at the event included a Deloitte product of three screens that employs blockchain for cybersecurity, and an application from startup Riddle & Code that authenticates expensive watches.

Speakers included representatives of Pfizer and AstraZeneca, who discussed blockchain applications in pharmaceutical research, and Microsoft, which is marketing a blockchain-based "decentralized identity" to secure personal data.

Attendees also discussed solutions to manage the ownership of digital assets and the various legal and regulatory issues that have surfaced.

This year's conference, sponsored by the digital media company CoinDesk, follows a turbulent year for bitcoin, which bottomed out at $3,200 in December in a decline that sparked skepticism on the potential of blockchain.

The volatility in bitcoin prices as especially troubling for some observers. Fuldord said some smaller players have exited the market, leaving it to more established companies.

"Some of the hype has slowed down in the back of price weakness in 2018," Fuldord said.

Some blockchain experts have questioned whether the latest rise in bitcoin as a result of financial market uncertainty due in part to protracted US-China trade talks, with investors seeking "refuge" in the crypto market.

But for many the rally in the digital currency remains a mystery.

"We're still at the stage with bitcoin of alternating between euphoria and despair," said Thoorens, adding that more attention from regulators should with time lead to a more normalized market.

Thoorens noted that the crypto universe has come a long way from one that only two years ago could lead to banks closing an account linked to a crypto trading platform.

"All technologies go through the same steps, from fringe, to frontier, to mainstream," said Margaret Rosenfelds, an attorney who specializes in blockchain at K&L Gates.

At this point, finance is the most seasoned when it comes to understanding cryptocurrencies and using blockchain, she said.

But many other sectors are looking at applications, and devotees still expect to see growth is expected, even if the technology remains a bit abstract to a non-specialist.

Comparing it to the technology underlying email and many other now-common applications, Rosenfelds said, "The average person don’t need to understand how it works to adopt and use it."