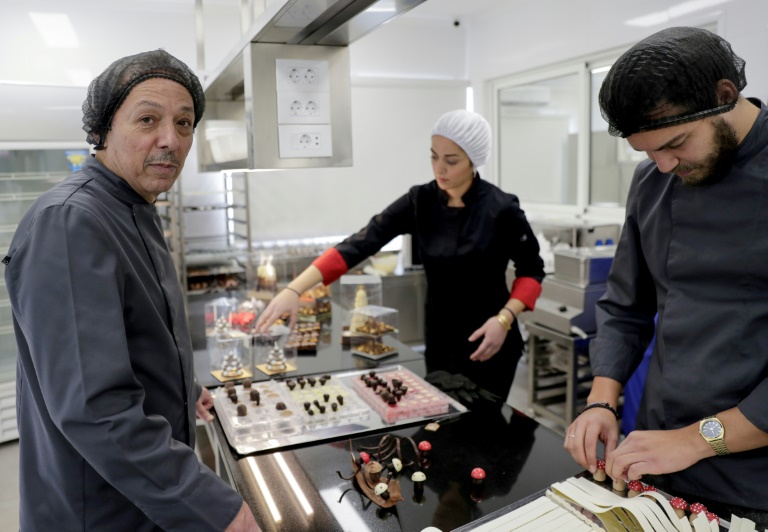 After decades of hard work, self-made Lebanese chocolatier Roger Zakhour thought he would finally be able to pass a successful business to his daughter. But then the economic crisis hit.

Instead of reaping profits this Christmas, he and his 29-year-old daughter are marking down their handmade ice cream logs.

"If it continues like this, in a few months I'll be bankrupt," the 61-year-old said sitting in his small shop, surrounded by colourful stacks of hand-crafted chocolates.

In protest-hit Lebanon, a free-falling economy, price hikes and a severe dollar liquidity crunch have left local businesses struggling to stave off collapse.

Zakhour started making chocolates and then ice cream in the 1990s, refining his recipes until he became a go-to for five-star hotels and well-off Lebanese.

But as the economy worsened over the autumn, high-end hotels drastically reduced their orders and walk-in customers became rare.

Banks have restricted access to dollars since the end of the summer, sending prices soaring as importers struggle to secure enough hard currency to buy supplies.

"We're heading somewhere we never imagined we would," said Zakhour, who had just upgraded his kitchen when sales dropped off.

In pursuit of high-quality products, Zakhour imports his ingredients, paying in euros or dollars.

But with withdrawals restricted and no transfers abroad, that is no longer viable.

"Now when something runs out, that's it," he said.

Unprecedented protests have swept Lebanon since October 17, with people from all backgrounds demanding a complete overhaul of a political class they deem useless and corrupt.

The government stepped down on October 29, but endless political deadlock has delayed a new one being formed to tackle the urgent need for economic reforms.

Zakhour's business is just one of thousands struggling to stay afloat.

Many Lebanese have been forced to close shop, and a large number have been fired or seen their salaries slashed by half, even as the cost of living increases.

Watching all this unfold, 31-year-old nursery school teacher Lea Hedary Kreidi and her family racked their brains to see how they could help.

Shortly after protests started, they launched a group on Facebook called "Made in Lebanon -- The Lebanese Products Group" to encourage Lebanese to buy locally produced goods.

In just two months, they amassed more than 32,000 members, who post ads for locally or homemade goods, or ask for local alternatives to imported products.

"We're used to going shopping and buying what our mothers used to buy. We grab what's in front of us without checking if it's made in Lebanon or not," she said, seated at home by a sparkling Christmas tree.

But there are locally made options for numerous products, including detergent, shampoo, nappies, peanut butter, ketchup, and children's building blocks.

"I was surprised by how many things there were that I didn't know about," said the mother of a baby boy.

In her drive to support her fellow citizens, Kreidi now skips her usual supermarket in favour of nearby small grocers.

This Christmas, only the children in her family will be receiving presents, which will all be made in Lebanon.

In Beirut, bar manager Rani al-Rajji says he is also having to adapt -- moving away from increasingly expensive imports while also remaining affordable.

"As much as I can, I'm trying to lessen the blow so our guests don't feel they've lost their purchasing power and can no longer afford to go out," said the 43-year-old, who is also an architect.

To do this, he and his co-founders are trying to increase local brands from a fifth to around a half of all bar and kitchen supplies.

"We're trying to use local products for all those with an alternative made in Lebanon," he said, sitting at the bar.

And they are also attempting to cut out unnecessary packaging and marketing costs, serving wine directly from the barrel and beer from the keg.

"We can't replace everything, but we can try to give Lebanese products more life, encourage their consumption," he said.

But some cash-strapped consumers say buying local is not their chief concern.

In a Beirut supermarket, 35-year-old Mariam Rabbah clutched a nearly empty basket wondering what to buy with her diminished salary.

"Everything is more expensive and we're now paid half," she said.

"Now what we care about is if something is cheap and good quality -- not whether it's imported or Lebanese."