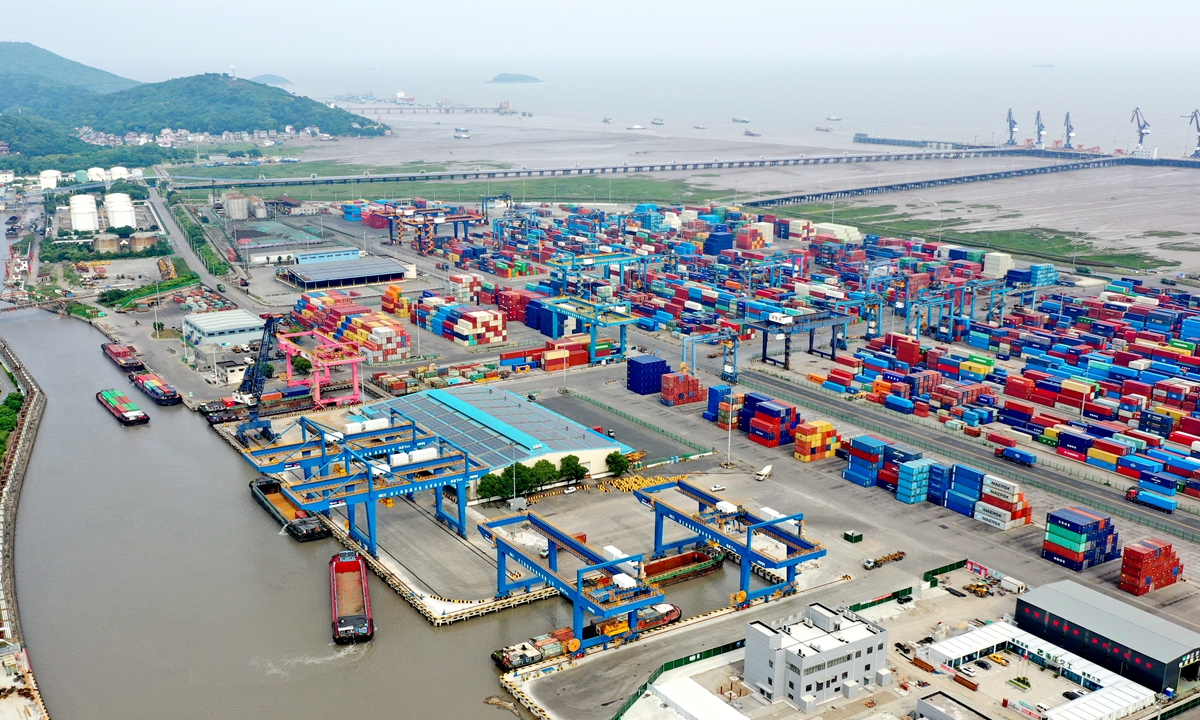 Containers are loaded on barges at a port in Jiaxing, East China's Zhejiang Province on June 16, 2022. The throughput of containers that were shipped between oceangoing vessels and river-going vessels saw a sharp increase of 69.4 percent year-on-year during the first five months of 2022, according to Ningbo Zhoushan Port Group. （Photo: Courtesy of Ningbo Zhoushan Port Group）

Major Chinese export-oriented cities are using a wide array of measures from opening up new trade routes to engaging in specific markets to shore up foreign trade amid strong economic headwinds, as trade figures released on Sunday showed a diverging trend.

Shanghai, banking on its strong exports of new-energy vehicles (NEVs) and computers, posted a 15.8-percent-increase in foreign trade to 414.97 billion yuan ($58.21 billion) in August, according to media reports over the weekend. The August figure was a record high, continuing a strong recovery trend since June, when the city resumed normal life and production following "static management" since April.

For the first eight months, the city's foreign trade grew by 4.8 percent, reversing a contraction during the first half.

Cities such as Shanghai and Ningbo are strong export bases and play a significant role in the country's overall plan to stabilize foreign trade amid global headwinds marked by weakening demand, high inflation and logistics uncertainties.

This month, China's central and local governments rolled out a new round of support policies to ensure that export powerhouses play the role of a bulwark in stabilizing foreign trade.

Li Yiman, general manager of Zhejiang Man Supply Chain Management Co, told the Global Times on Sunday that Zhejiang has been sending merchants in and out of the province so they have a better chance of capturing orders by meeting up with new and old customers alike in person. Yiwu flew in a lot of foreign merchants during July and August, Li said.

A manager at Port of Ningbo Zhoushan, the world's largest port, told the Global Times on Sunday that the port authority has tapped multiple means, from opening up new shipping lanes to channeling more railway capacity into the port, to improve efficiency and connect with more inland logistics hubs. It's hoping to ward off downward pressure from the sagging global economy.

In the first eight months, the port's throughput hit 23.69 million standard containers, up 10.9 percent from the corresponding period in 2021, according to data the port sent to the Global Times on Sunday. The port's shipping lanes reached a historic high of 300 and data as of July 24 showed that container volume handled under the rail-sea combined transportation mode jumped by 31.7 percent year-on-year.

Officials in Zhejiang Province are seeking new ways to help exporters in the province establish a market presence. On Friday, the province organized 1,500 trade officials and entrepreneurs to explore business opportunities with their South Korean counterparts under the Regional Comprehensive Economic Partnership trade pact.

Some experts believe there is untapped potential for China's major export-oriented cities, so that they could provide more impetus to the national economy.

The foreign trade situation among China's top cities has shown a divergent trend in its recovery. 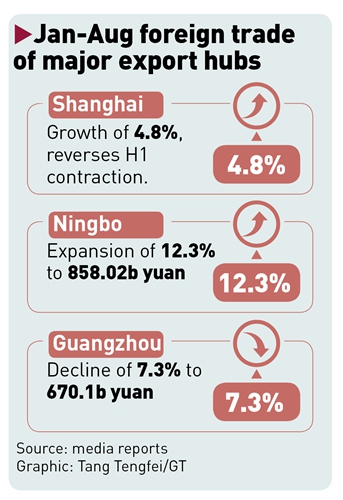 Guangzhou, capital of South China's Guangdong Province, reported a decline of 7.3 percent in its total foreign trade to 670.1 billion yuan in the first eight months. Exports declined by 14.7 percent from the same period last year.

An official with a local manufacturing industry association told the Global Times on Sunday that for his industry, which makes upstream components for consumer electronics products, the decline in orders has been significant and companies are running at less than 50 percent capacity utilization.

"The autumn season should be a peak season but now we don't have many orders," the person said on condition of anonymity. "The government should consider in advance how to keep the majority of companies in heavily impacted industries afloat by winter."

Bai Ming, deputy director of international market research at the Chinese Academy of International Trade and Economic Cooperation in Beijing, told the Global Times on Sunday that as the EU and the US are entering recessions this winter and slashing demand, and Southeast Asian countries are challenging China's goods with low prices, it is vital for Chinese companies to at least retain market share.

Despite a strong 10.1-percent increase in foreign trade in the January-August period, more support policies are needed to help shore up exporters as the challenges ahead should not be underestimated, Bai said.

From a long-term perspective, Chinese companies should continue to improve their relative competitiveness to stay afloat, Bai said, noting that soaring NEV exports are an example of a booming market trend because of irreplaceable advantages.