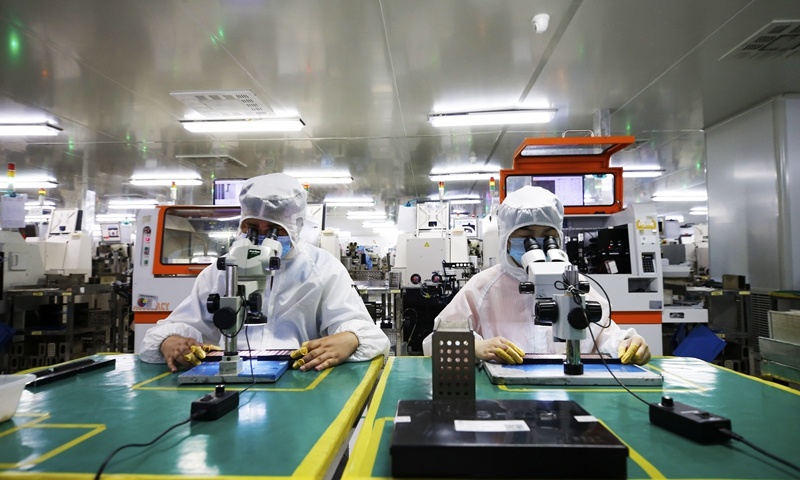 As surging COVID-19 cases in Malaysia disrupted the production of semiconductors and other key components, Chinese experts are suggesting that companies should move certain production lines to the Chinese mainland to ensure the smooth running of their facilities while meeting the huge demand.

A manager of a Chinese autonomous driving firm told the Global Times on Wednesday that the new outbreak in Malaysia has already caused major disruptions to the company's chip supplies.

"The lead time for chip supplies has been extended to as long as 20 weeks, and we have to pay a skyrocketing price for urgently needed chips," the manager said, "there is no way out. We have to wait for an explosive surge in the supply of semiconductors, and we have no idea how long it will take."

Due to continuous supply shortages of master control chips, FAW-Volkswagen Automotive was forced to partially stop production of some Audi models starting from August 12, including the A4L, A6L and Q5L vehicles, according to a notice from the company circulating online on Wednesday.

It said that production is projected to resume in the first quarter of 2022.

The severity of the global chip shortage has led to a decline in the supply of new cars, driving consumers to shift to used cars. Data from the China Automobile Dealers Association showed that transactions involving used cars hit 8.43 million in China in the first half of 2021, up 52.9 percent year-on-year, approximately 27 percentage points faster than sales of new cars.

With the fast spread of the Delta variant, Malaysia continues to grapple with a worsening COVID-19 outbreak. The country had a staggering 19,631 new cases of COVID-19 on Tuesday, local news portal the Star reported, citing its health ministry.

With new infections still on the rise, the Malaysian government has ordered many businesses and factories to shut down, affecting production in a wide range of sectors, especially the packing and testing of chips and passive component manufacturing.

Dozens of semiconductor companies have facilities in Malaysia, including international giants such as Intel, Infineon Technologies and STMicroelectronics.

Malaysia accounts for 13 percent of the global sealing and testing market, and it is the world's seventh-largest semiconductor exporter, according to media reports.

Xu Daquan, executive vice president of Bosch (China) Investment, posted on WeChat on Tuesday saying that a chip supplier's factory in Muar, Malaysia had been ordered to extend its closure till August 21, which directly affects its chip supplies such as vehicle control unit, domestic business news portal yicai.com reported.

Xu confirmed to the media outlet that the chip company is STMicroelectronics, adding that supply will be basically cut off for the rest of August.

The company declined to give details when reached by the Global Times on Wednesday.

In addition, the production of passive components such as resistors, capacitors and inductors in Malaysia has also been disrupted.

The extension of Malaysia's restriction order has posed severe challenges for the global multi-layer ceramic capacitor market, with products such as smartphones, servers and 5G base station components expected to be affected, according to a report from TrendForce in July.

The supply chain uncertainties in Southeast Asia, along with China's huge demand for semiconductors and other key components, may drive the packing and testing of semiconductors and passive component manufacturing to the Chinese mainland, industry analysts said.

Ma Jihua, a veteran telecommunications industry analyst, told the Global Times on Wednesday that chip shortages may be exacerbated due to the raging pandemic overseas and chip hoarding.

Possibly, the problem won't be solved until the first half of 2022, Ma said, suggesting that enterprises shift their chip sealing and testing production lines to the Chinese mainland.