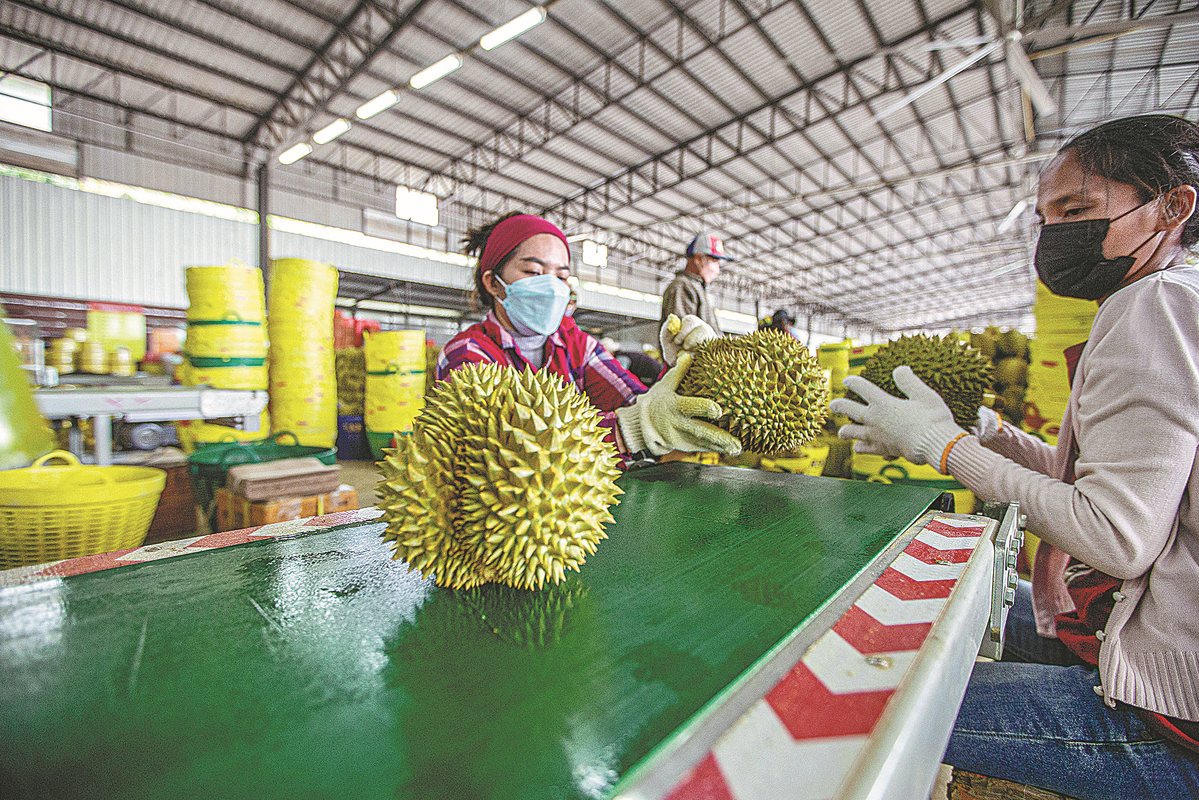 Workers disinfect durians bound for export at a factory in Chanthaburi, Thailand, in May. [Photo/Xinhua]

The Regional Comprehensive Economic Partnership (RCEP) free trade agreement would be a key contributor to the recovery strategy of the Association of Southeast Asian Nations (ASEAN), according to an ASEAN foreign ministers' joint communique released here on Friday.

In the joint communique issued after the 55th ASEAN foreign ministers' meeting (55th AMM) held in Phnom Penh, capital of Cambodia, the ministers welcomed the entry into force of the RCEP from Jan 1, 2022.

"The RCEP would make significant contribution to our recovery strategy and continue to support an inclusive and open trade and investment architecture in the region," the communique said.

Speaking at the opening ceremony of the 55th AMM on Wednesday, Cambodian Prime Minister Samdech Techo Hun Sen proposed the establishment of a standalone secretariat in Cambodia to maximize the potential of the RCEP.

"Cambodia is ready to host this RCEP secretariat. We have even thought of where in Phnom Penh the secretariat should be located, while we are working to formulate our detailed proposal," he said.

"I hope Cambodia can win the support of fellow ASEAN member states, as well as all RCEP participating countries when we submit our proposal officially."

The mega-regional pact will eliminate as much as 90 percent of the tariffs on goods traded among its signatories over the next 20 years.

According to an Asian Development Bank's study, the RCEP will increase the member economies' incomes by 0.6 percent by 2030, adding $245 billion annually to regional income and 2.8 million jobs to regional employment.

Cambodian Ministry of Commerce's undersecretary of state and spokesman Penn Sovicheat said the RCEP would inject a new impetus into regional and global economic growth in the long term.

"The RCEP will give a big boost to our economy in the post-pandemic era," he told Xinhua. "It is also a well-timed intervention in Cambodia's quest for a Least Developed Country (LDC) graduation, likely by 2028 and the country's planned endeavor to achieve the upper-middle income and high-income statuses by 2030 and 2050, respectively."

Kin Phea, director-general of the International Relations Institute of the Royal Academy of Cambodia, said the RCEP is instrumental in subverting creeping unilateralism because it pulls all bilateral free trade agreements into one economic sphere, under one blanket trade ruling.

"It is the most ambitious regional free trade agreement in Asia in which China has played a vital role in converting Asian economy into a core economic polar aimed at averting protectionism and the widespread negative impacts of the trade war," he told Xinhua.