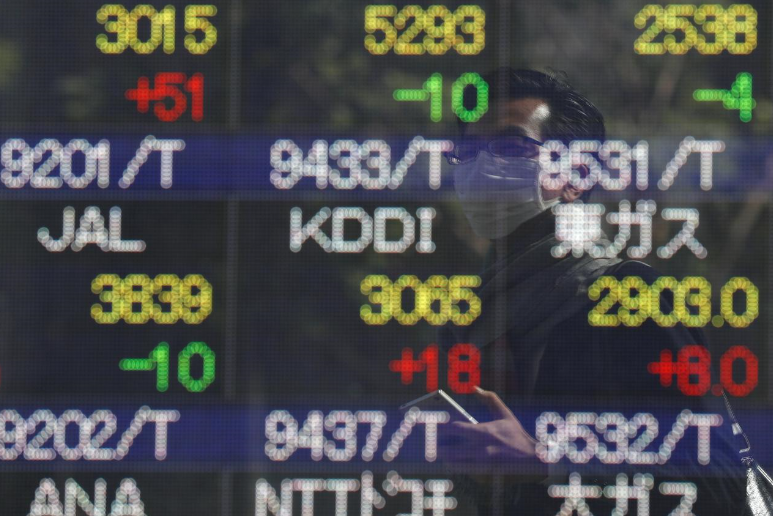 A man is reflected in an electronic stock quotation board outside a brokerage in Tokyo, Japan, October 23, 2017.   REUTERS/Issei Kato

Asian shares got off to a cautious start on Thursday after Wall Street stumbled despite upbeat U.S. economic news and the Treasury yield curve hit its flattest in a decade as investors priced in more U.S. rate hikes.

Concerns over the prospects for a massive U.S. tax cut also showed no sign of abating as two Republican lawmakers on Wednesday criticized the Senate’s latest proposal.

MSCI’s broadest index of Asia-Pacific shares outside Japan .MIAPJ0000PUS inched up 0.1 percent in early trade, while Australian stocks  were a fraction weaker.

Wall Street had been weighed by a retreat in the S&P 500 energy sector .SPNY which suffered a four-day decline of 4 percent, its weakest such period in 14 months.

Yet that strength also added to risks that the Federal Reserve would not only hike in December, which is now almost fully priced, but several times next year as well.

That outlook promises to push short-term Treasury yields US2YT=RR up further from the current nine-year peaks.

Investors also suspect this tightening will slow the economy and stop inflation ever getting to the Fed’s 2 percent target, pulling down longer-term yields US10YT=RR.

As a result the gap between two- and 10-year yield has shrunk to 64 basis points, down from 98 basis points four months ago and the thinnest premium since late 2007.

“Whether it is the flattest yield curve in a decade, and what that has historically signaled for future growth, the recent troubles in high-yielding credit or lingering geopolitical tensions, it is not entirely clear what has markets spooked,” ANZ analysts wrote in a note.

“But it is a reminder that even though the global economy is experiencing its most broad-based upswing in years, there are enough issues out there to keep investors on their toes.”

The upswell of risk aversion benefited the Japanese yen as a traditional safe haven. The dollar was stuck at 112.81 yen JPY= having sunk as deep as 112.47 overnight.

Doubts that the latest round of talks to overhaul the North American Free Trade Agreement would make much headway in the face of tough U.S. demands saw Mexico's peso MXN= sink to an eight-month low.

Oil prices were under pressure after the U.S. government reported an unexpected increase in crude and gasoline stockpiles. [O/R]

They had already lost ground to this week’s International Energy Agency (IEA) outlook for slower growth in global crude demand.