Global stocks extended a sell-off on Tuesday as mounting trade tensions between the United States and other major economies continued to steer investors away from riskier assets, lifting safe-haven US Treasuries and keeping the dollar on the defensive. 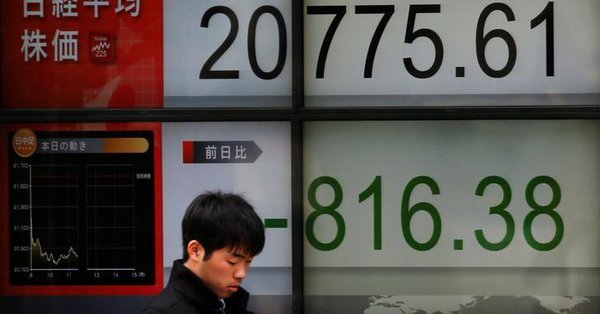 A man looks at a mobile phone in front of an electronic board showing Japan's Nikkei average outside a brokerage in Tokyo, Japan, March 23, 2018. (Photo: Reuters)

Equities in Asia took their cues from Wall Street, where the S&P 500 and Nasdaq suffered their steepest losses in more than two months overnight.

US technology shares were particularly hard hit. Chipmakers which derive much of their revenue from China took a battering, following a report on Monday that the US Treasury Department was drafting curbs that would block companies with at least 25 percent Chinese ownership from buying US tech firms.

Besides the trade spat with China, the United States has recently upped the ante in a challenge to the European Union by threatening to impose tariffs on cars imported from the bloc.

“It’s turning out to be a long-term bearish factor for the financial markets, as the United States is unlikely to back down at least through its midterm elections.”

The dollar index against a basket of six major currencies stood little changed at 94.302 after dipping 0.25 percent overnight, when it fell for the fourth straight session.

The greenback was pressured as long-term US Treasury yields declined to one-week lows amid the heightened risk aversion in financial markets.

The euro hovered just below an 11-day high of $1.1713 scaled overnight against the sagging dollar.

The US currency was down 0.2 percent at 109.525 yen, having fallen to a two-week low of 109.365 on Monday. The yen often attracts bids in times of political tensions and market turmoil.

Brent crude oil futures were up 0.3 percent at $74.95. The contracts had slid 1 percent overnight as receding investor risk appetite weighed on commodities.

Oil prices have seesawed after OPEC and its allies on Friday agreed to increase global supplies, albeit modestly.