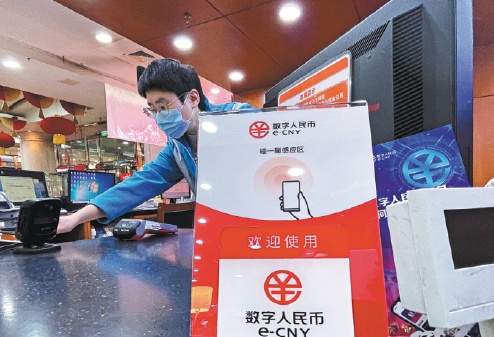 A digital renminbi payment sign at a bookstore in Beijing. (Photo: China Daily)

The People's Bank of China, the central bank, said in a statement posted on its website on Wednesday that its digital currency institute is now one of the co-founders of the project named "Multiple Central Band Digital Currency Bridge", or "m-CBDC Bridge". The other three founders are the Hong Kong Monetary Authority, the Bank of Thailand and the Central Bank of the United Arab Emirates.

The project aims to explore the use of central bank digital currencies in several cross-border scenarios, according to the statement.

The m-CBDC Bridge project will also develop a favorable environment for central banks in Asia and other regions to conduct joint research and facilitate financial infrastructure for cross-border payments, in an attempt to solve problems like low efficiency, high costs and low transparency, it said.

The participating central banks will take into account the results of the project to evaluate the feasibility of the m-CBDC Bridge project for cross-border fund transfers, international trade settlement and capital market transactions, according to the PBOC Digital Currency Institute.

The project will explore capabilities pertaining to distributed ledger technology, a fundamental technology of cryptocurrency such as the Bitcoin, by developing a proof-of-concept prototype, to facilitate real-time cross-border foreign exchange payment-versus-payment transactions in a multijurisdictional context and on a 24/7 basis. It will also explore cases in cross-border trade using both domestic and foreign currencies, the statement said.

Yang Dong, executive dean of the Blockchain Institute of the Renmin University of China in Beijing, told China Daily on Wednesday that the m-CBDC Bridge project intends to explore multilateral cooperation of digital currencies developed in different countries, and the PBOC move will have a significant effect.

It will help improve the digital renminbi, or e-CNY, which is currently undergoing tests in some places in China, and also help in its broader use, said Yang.

This multilateral project will also strengthen regional economic cooperation, as some of its guidelines are linked to the Belt and Road Initiative, which includes economies in Southeast Asia that have strong trade ties with China. So the project will help achieve digital currency exchanges and enable freer cross-border floats in the region. Based on that, central banks can explore the public-private partnership model for digital currency, Yang said.

In addition, the project will promote the internationalization of e-CNY, as it will provide a "window period" to introduce China's digital legal tender overseas, he said.

Before the project, the HKMA and the Bank of Thailand conducted a joint research project named "Project Inthanon-LionRock" in the fourth quarter of 2019 to study the application of central bank digital currency for cross-border payments. Based on its current efforts, the m-CBDC Bridge project will see further development.

The HKMA has unveiled plans to bring banks and large corporates including HKEX into CBDC trials and extend the architecture to a multi-CBDC platform.

Experts expect the project and its successive innovation to address "pain points" in cross-border financing and how it is applied to the business world. These pain points include cost inefficiencies and the complex regulations related to transferring money from one country to another.

Mathee Supapongse, deputy governor of the BOT, said earlier that the design and some key findings "have added new dimensions to central bank communities' studies on cross-border funds transfer area".

Zhou Xiaochuan, former governor of the PBOC, said during a seminar recently that digital currencies should be used in cross-border trade based on retail sales and need to respect the various policies and regulations in different countries, including monetary, foreign exchange policies and currency exchange and remittance regulations.

Economies in East Asia and the ASEAN region are relatively active in developing digital currencies, where the regulatory environment and the level of development in each country are quite different, said Zhou. "Given this situation, China can steadily and slowly push forward the digital currency development."

Zhou suggested the establishment of a payment system for retail sales using the e-CNY, and said the system will support cross-border tourism payments initially. It is likely to enhance the internationalization of the renminbi at the same time. But the central bank should focus on supporting cross-border payment settlements, he said.