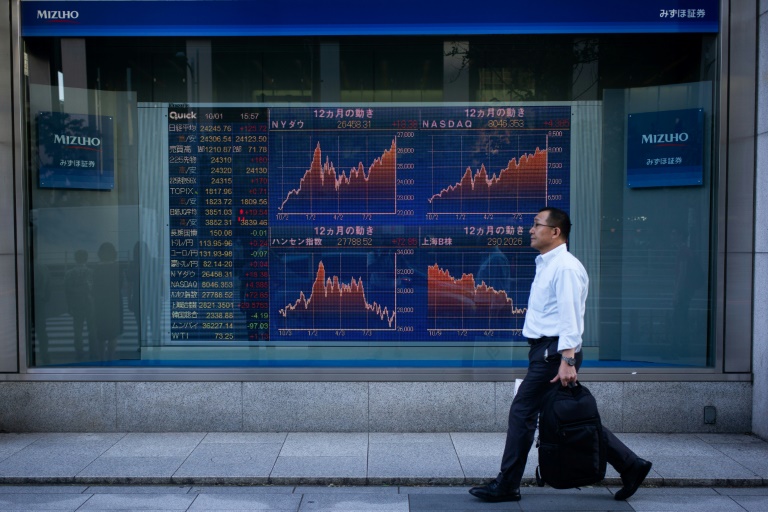 The Hang Seng index in Hong Kong was up 0.7 percent by mid-morning.

Taiwan and Sydney both climbed 1.5 percent, and Singapore stocks rose by 1.6 percent.

"Thankfully for investors, the relentless selling on the back of risk-off sentiment which prevailed leading up to Christmas has mercifully halted... with the Dow surging over 1,000 points while adding the most significant points gain in history," said Stephen Innes, head of APAC trading at OANDA.

"It was possible that risk appetite wouldn't recover until after the new year but thanks to the upturns in Tokyo and New York, we are likely to see the new year in with a somewhat brighter mood," Mizuho Securities said in a note.

But while a sense of relief won out for now, analysts warned that there was still much uncertainty in the market.

"Don't get too comfortable as discussions regarding the various political and policy questions remain hanging in the balance," said Innes.

US stock-index futures fell as much as 0.6 percent on Thursday, suggesting investors are unlikely to sustain Wednesday's market rally when US markets open.

Kyle Rodda, a Melbourne-based market analyst at IG Group Holdings Plc, told Bloomberg News investors "are still nervous about how financial markets and the global economy will go during a cyclical slowdown without central bank support".

The euro remained weak against the dollar after falling in New York.

Mizuho Bank said: "Many market players expect the dollar would likely drop against the yen early next year as factors that could fuel risk aversion or prompt dollar selling are lining up."