Asian markets lifted by hopes on virus but oil in retreat 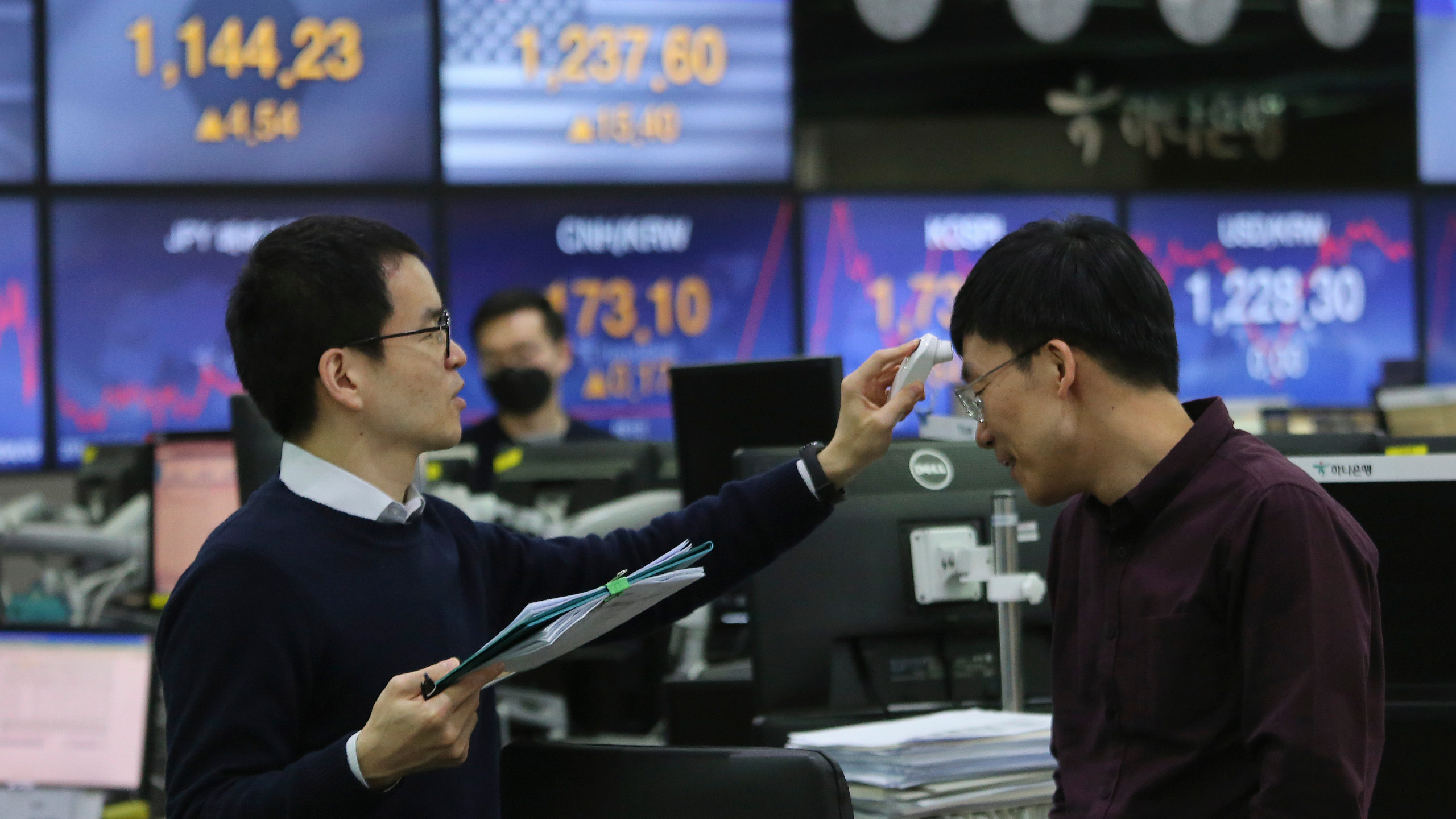 A currency trader checks the temperature of his colleague at the foreign exchange dealing room of the KEB Hana Bank headquarters in Seoul, South Korea, Friday, April 3, 2020. (Photo: AP)

Asian markets rose Monday as some of the world's worst-hit countries reported falling death rates, providing some much-needed hope in the battle against the coronavirus, though oil prices were rocked after a meeting of top producers was delayed.

While the disease continues its deadly sweep across the planet, with more than 1.25 million now infected and nearly 70,000 dead, news out of Europe that fatalities were easing has lifted spirits on trading floors.

Meanwhile, South Korea saw its fewest new cases in six weeks, while Donald Trump said the US was showing signs of stabilising, despite the number of cases there passing 335,000 -- the highest in the world.

The virus "appears to be reaching a peak in Europe, with Italy seeing the number of patients in intensive care falling for the second consecutive day", said National Australia Bank's Tapas Strickland.

"Note, Italy imposed a countrywide lockdown on March 9, and so is supportive of the view that the virus peaks and peters out after 15-30 days following a strict lockdown. Focus in markets will now turn to the path out of lockdown and to what extent containment measures can be lifted without risking a second wave of infections."

And Lindsey Piegza, at Stifel Nicolaus & Co., told Bloomberg TV she was hopeful that the crisis can be brought under control and the US economy reopened "by the end of April, early May".

The relatively upbeat news lifted Asian markets, which shrugged off data Friday showing a massive drop in US jobs in March that added to news that millions of people had applied for unemployment benefits.

Seoul added nearly two percent, Hong Hong was up 1.1 percent and Singapore, Manila and Jakarta were all more than one percent higher.

However, observers remain cautious as the US enters what Trump said would be "a time that's going to be very horrendous" with "some really bad numbers".

The country's Surgeon General Jerome Adams warned on Fox News: "This is going to be our Pearl Harbor moment, our 9/11 moment."

Erik Nielsen, of UniCredit SpA, said: "There is light at the end of the tunnel but it's still a long tunnel."

Attention this week will be on a planned meeting of OPEC and other key crude producers aimed at easing a supply glut that has sent oil prices crashing.

Both main contracts soared last week as Trump said Saudi Arabia and Russia would hold talks on ending their price war, while it also emerged OPEC would be holding a teleconference on Monday.

However, investors were dealt a blow over the weekend when the meeting was delayed to Thursday, while analysts said there were doubts that the US would take part in them, which could be a major sticking point for Moscow and Riyadh.

"If the Americans don't take part, the problem which existed before for the Russians and Saudis will remain -- that they cut output while the US ramps it up, and that makes the whole thing impossible," Fyodor Lukyanov, a Kremlin adviser, said.

But even if a deal is reached there is widespread scepticism that cuts of 10 million barrels a day that have been suggested will be enough to help the oil market owing to the collapse in demand caused by coronavirus.

"The likelihood of a deal being done is extremely low," Daniel Hynes, at Australia & New Zealand Banking Group, said. "Certainly the type of agreement you'd need to stabilise the market is a long shot given how much demand has been hit."

On currency markets the pound was struggling after news broke that British Prime Minister Boris Johnson had been admitted to hospital as a "precautionary step" as he had failed to shake off coronavirus symptoms after 10 days.

Shanghai - Composite: Closed for a holiday