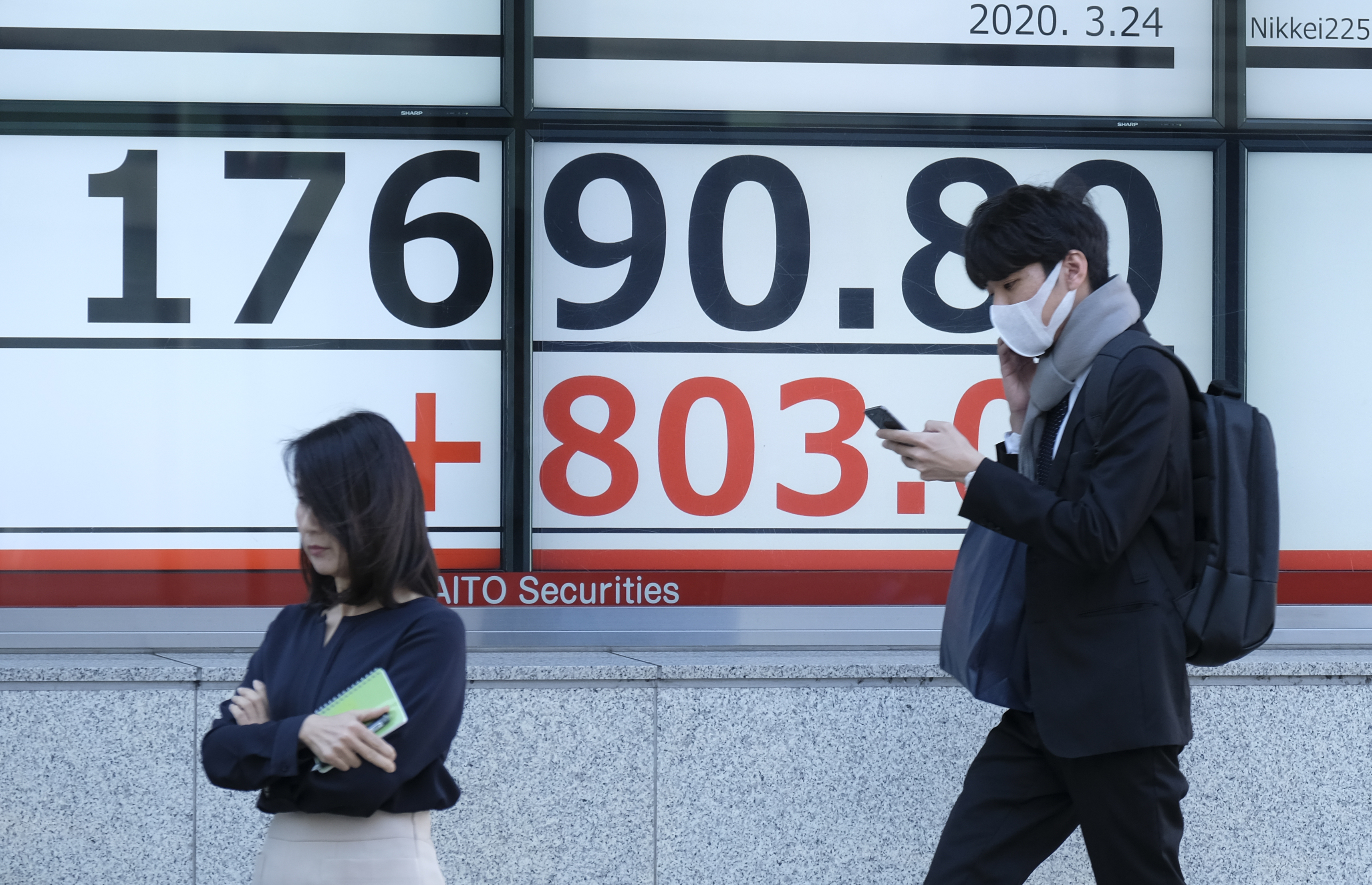 Asian equities mostly rose and the dollar extended losses Friday, with traders buoyed by government and central bank pledges to prop up the global economy as the coronavirus sends countries into lockdown.

Despite the painful toll the disease is inflicting on lives and economies, markets are on course to end the week with healthy gains following a barrage of stimulus and monetary easing.

While the number of people contracting COVID-19 continues to escalate -- the US now has more confirmed cases than China and Italy -- the support measures, which the G20 said amounted to $5 trillion, have given traders hope that the expected recession will be sharp but short.

Even news that a record 3.3 million Americans claimed unemployment for the first time last week -- smashing the previous all-time high of 695,000 set in 1982 -- was unable to derail a rally in New York with the Dow and S&P 500 up more than six percent.

The S&P 500 has now recorded its quickest three-day advance in nine decades, according to Bloomberg News.

And Dan Skelly at Morgan Stanley Wealth Management said stocks, which have been clobbered in recent weeks, were showing signs of forming a bottom.

"While we do believe this will be possibly the sharpest recession in history, it may also be the shortest, so there is room to be optimistic for a second-half rebound," he told Bloomberg TV.

The advance in Wall Street extended into Asia, where Tokyo finished 3.9 percent higher.

However, not all markets were able to sustain the rally, with some paring earlier gains and others going into negative territory.

But Mumbai fell 1.5 percent as investors brushed off a deep interest rate cut by the Indian central bank, while Sydney went into the weekend on the back of a 5.3 percent loss. Wellington, Taipei and Manila were also down after reversing early gains.

Support this week has come from a $2 trillion stimulus bill that is making its way through Congress and is expected to be passed by the House of Representatives Friday before being signed off by President Donald Trump.

"For investors, this package should be good for US equities and other risk assets as it should leave US corporations in a better position to weather the economic downturn and thrive in the rebound," said David Kelly, at JP Morgan Asset Management.

Also on Thursday, Federal Reserve chief Jerome Powell said the US central bank would continue to "aggressively" pump liquidity into the economy.

"When it comes to this lending, we're not going to run out of ammunition. That doesn't happen," Powell said on NBC.

AxiCorp analyst Stephen Innes said: "The Fed's bazookas appear to be filtering through, and that's a massive positive the market is running with."

However, he warned: "It's impossible to gauge the ultimate economic impact or the duration of the COVID-19 pandemic for weeks, possibly months, and until that point, the sustainability of any rally in stocks is questionable."

And CMC Markets analyst Michael Hewson warned that the virus infection and death rate would continue to rise sharply and "in any subsequent recovery, consumer incomes and confidence will take some time to recover".

The Fed's promise to effectively print cash has sent the dollar tumbling this week and it continued to fall across the board Friday, with higher-yielding, riskier units enjoying some respite.

The Mexican peso jumped more than three percent, while the South Korean won was more than one percent higher. Australia's and New Zealand's dollars were each up around two percent.

Oil's initial advance also ran out of steam, a day after taking another severe hit from ongoing worries about the impact of the virus on demand as well as the price war between major producers Russia and Saudi Arabia.

Adding to crude market weakness was a warning from the head of the International Energy Agency that consumption could drop by 20 million barrels a day.

Also, industry consultant IHS Markit warned that current output levels cannot be sustained throughout the second quarter because storage capacity will fill up.

"Production is going to have to be reduced or even shut in. It is now a matter of where and by how much," said Jim Burkhard, vice president and head of oil markets at IHS Markit.