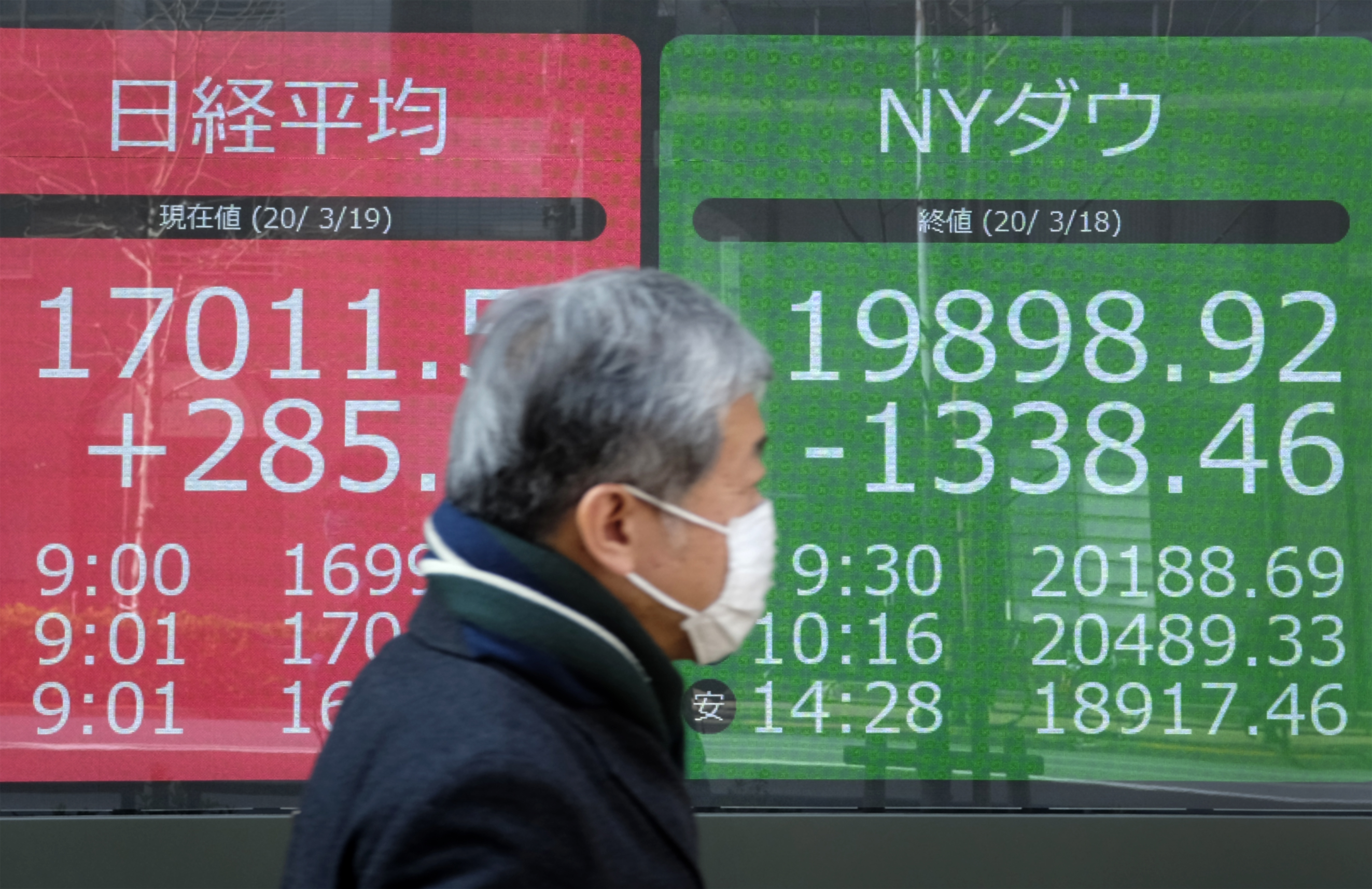 Asian markets fell Monday following a steep drop on Wall Street as the jubilation from last week's enormous US stimulus package faded and investors returned their attention to the soaring infection and death rate of the coronavirus.

Donald Trump finally signed off the more than $2 trillion pump-priming measures on Friday, but equities -- which enjoyed a much-needed rally for much of the week -- ended on a negative note as dealers took profits.

While the disease ravages populations and the global economy grinds to a halt with 40 percent of the planet in lockdown, experts are struggling to get a grip on the scale of the crisis that is forecast to cause a worldwide recession.

And analysts say there are likely more dark days ahead, with Trump abandoning his timetable for life returning to normal in the United States and extending emergency restrictions for another month.

The president said he expected the country to "be well on our way to recovery" by June 1 -- dropping his previous target of mid-April.

Meanwhile, senior US scientist Anthony Fauci issued a tentative prediction that COVID-19 could claim up to 200,000 lives in the US.

AxiCorp's Stephen Innes said that while governments and central banks have acted to shore up the global economy, pledging around $5 trillion in stimulus support, markets looked like they were "nearing policy fatigue where it becomes less effective, and as the surprise element diminishes, no one cares".

"So, while policy responses in the US and Europe have been spectacular... the coronavirus keeps spreading globally, deepening fears of the economic and financial impact across countries. More market turmoil likely lies ahead."

He also pointed out that with the corporate reporting season approaching "now we are about to enter a vortex of bad earnings, bad economic data, and bankruptcies".

The downbeat mood weighed on Asian equities. Tokyo went into the break more than three percent down, while Hong Kong, Shanghai and Taipei were more than one percent lower in the morning.

"The big question for markets is whether the huge stimulus introduced so far across the globe will be enough to help the global economy withstand the economic shock from the COVID-19 containment measures," said National Australia Bank's Rodrigo Catril.

"To answer this question one needs to know the magnitude of the containment measures and for how long they will be implemented. This is the big unknown and it suggests markets are likely to remain volatile until this uncertainty is resolved."

The return to a risk-averse environment on trading floors also sent the dollar back up against higher-yielding currencies with the Mexican peso, Indonesian rupiah and South Korean won losing more than one percent apiece.

The oil market remains in turmoil, with the Saudi-Russian price war adding to the impact of battered demand caused by the virus. And there are warnings the commodity, already at near two-decade lows, could sink even further as production remains heightened and storage tanks around the world approach full capacity.

"When the storage capacity is filled, we should probably expect a response from Saudi Arabia, Russia, and other essential oil producers," Innes added, though he warned "the longer their response takes, the higher the risk of another steep decline in oil prices".