Investors around the world are fleeing riskier assets such as stocks and high-yielding currencies in search of safety as wave of negative issues dominate the news. 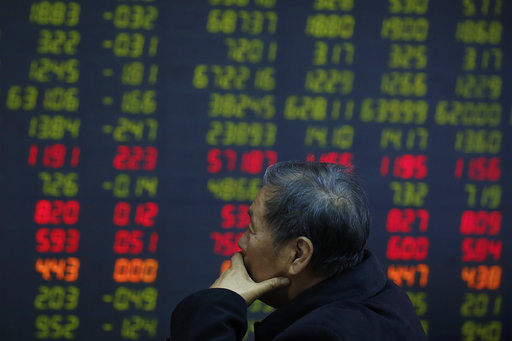 He also highlighted that even US stocks -- which have been supported in recent months by a strong economy despite sharp losses elsewhere -- are feeling the strain.

"Significant for global equity investors, the US equities Teflon persona was seriously questioned as price action suggested there is one asset class investors fear: equities," he warned in a note.

Despite an afternoon bounce, Wall Street's three main indexes ended with losses following a mixed round of earnings.

And the selling continued in Asia.

Taipei, Wellington and Manila were also down, though Singapore edged slightly higher.

David Kudla, chief executive officer of Mainstay Capital Management, told Bloomberg Television: "We’ve come up upon a tremendous wall of worry for US stocks and stocks around the world. Concern among investors is the deceleration in earnings growth."

Prices had hit four-year highs this month with sanctions due to be imposed on Iran next month, while Venezuela continued with an economic and political crisis and US data pointed to a pick-up in demand.

However, they have dipped in recent weeks owing to growing concerns about the global economy, particularly China, and a rise in the US dollar, which makes the commodity expensive for holders of other currencies.

Investors are also keeping an eye on Italy after the EU rejected the populist government's big-spending budget, the first time it has turned a member away over spending rules violations.

With Rome likely to ignore the decision, the move puts the two on course to a clash, just as the EU struggles to reach a deal for Britain to leave the bloc with a deadline imminent.

Oil - West Texas Intermediate: DOWN three cents at $66.40 per barrel