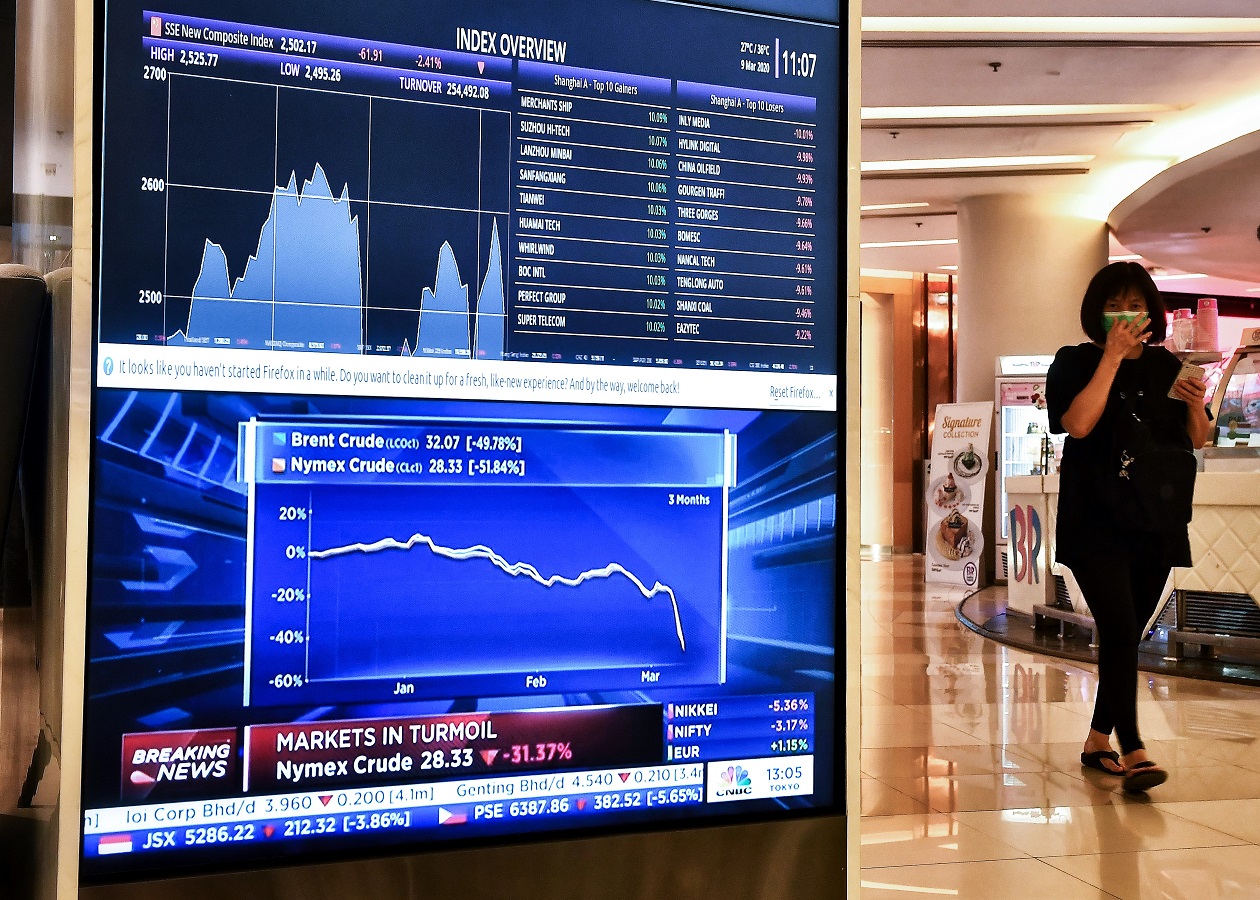 Photo: A woman wearing a face mask walks past an electronic board showing Asian stock index overview and news report on the oil market at a shopping mall in Bangkok on March 9, 2020. /AFP

Asian markets sank Tuesday as investors struggled to pick themselves off the floor following the previous day's global bloodbath, which saw Wall Street suffer its worst day in more than three decades as coronavirus sweeps the planet.

Despite government and central bank attempts to soothe markets with massive stimulus pledges and interest rate cuts, more countries are going into lockdown to prevent the outbreak's spread -- bringing the world economy juddering to a halt.

There is a broad consensus that the disease, which has wiped trillions off market valuations, will cause a global recession, with the airline industry first in the firing line leading company heads to plead for billions of dollars in state help to prevent them going under.

"Drastic measures by the Federal Reserve and other central banks have failed to appease markets, with investors still running towards the exit door of risk assets as governments step up their radical measures to contain the COVID-19 outbreak," said National Australia Bank's Rodrigo Catril.

The Philippines became the first country to shut down its stock market as the country goes into lockdown. The Philippine Stock Exchange and the Bankers Association of the Philippines said the bourse would be closed until further notice.

Elsewhere, Sydney rose 3.3 percent, a day after crashing 9.7 percent in its worst day on record.

But after an early advance, the rest of Asia resumed its downward trend.

Hong Kong and Shanghai lost more than one percent, while Seoul, Jakarta and Taipei dropped more than three percent. Tokyo ended the morning down 0.5 percent.

Singapore was slightly lower and Wellington was flat after New Zealand became the latest country to announce monetary support.

The losses came after Wall Street indices collapsed in their worst day since 1987, with the S&P 500 and Nasdaq dropping about 12 percent and the Dow sinking nearly 13 percent.

"The message from markets is that as much as monetary stimulus is a welcome move, lowering the price of borrowing and increasing liquidity are not enough," added Catril.

"The required COVID-19 measures are hampering the global economy and with activity grinding to a halt, governments need to step in and provide support. Markets are crying out for more fiscal backing."

Heads of the Group of Seven leading economies pledged to "do whatever it takes" to protect the economy, while Donald Trump acknowledged the world's largest economy "may be" headed into recession.

However, he added that the crisis should wash through the economy by August, after which there will be a "tremendous surge in the stock market".

Oil prices edged up a little, after Monday's collapse that saw Brent falling more than 12 percent to a four-year low, and WTI sliding below $30 a barrel.

Adding to the weakness in crude markets is the price war between major producers Saudi Arabia and Russia.