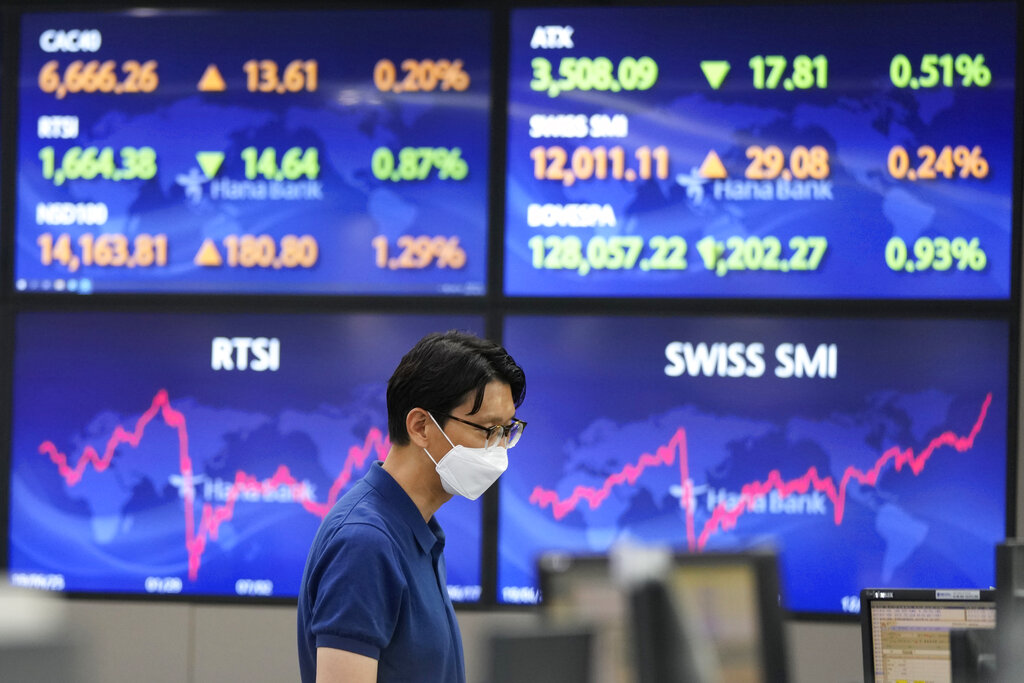 The Bank of Japan kept its ultra-lax monetary policy intact, as investors had expected. Wrapping up a two-day meeting, the central bank also extended by six months, until March 2022, a lending program to help companies weather the pandemic.

“Japan’s economy has picked up as a trend, although it has remained in a severe situation due to the impact of COVID-19 at home and abroad,” the Bank of Japan said in a statement.

The Fed's comments came Wednesday, and global markets had already initially reacted Thursday. But comments about the possibility of slowing the central bank's bond-buying program are rippling through markets. Such support has been a key reason for the stock market's resurgence to records.

The S&P 500 slipped less than 0.1% to 4,221.86 after meandering from a 0.2% gain to a 0.7% loss. Most of the stocks in the index and across Wall Street were lower, but gains for Apple, Microsoft and a few other tech heavyweights helped offset the losses.

In the bond market, the yield on the 10-year Treasury note gave back nearly all of its spurt from a day before. It fell back to 1.51% from 1.57% late Wednesday.

The two-year yield, which tends to move more with expectations for Fed actions, was steadier. It rose to 0.22% from 0.21%.

The first action the Fed is likely to take would be a slowdown in its $120 billion of monthly bond purchases, which are helping to keep mortgages cheap, but the Fed's chair said such a tapering is still likely "a ways away.”

Any easing up on the Fed's aid for the economy would be a big change for markets, which have feasted on easy conditions after the central bank slashed short-term rates to zero and brought in other emergency programs.

While the economy still needs support, the recovery is proving to be strong enough that it does not need the same emergency measures taken at the beginning of the pandemic, said Stephanie Link, chief investment strategist and portfolio manager at Hightower.

“We are going to get a taper," she said. “They need to, we do not need emergency stimulus at this point.”

The economy has begun to explode out of its coma as more widespread vaccinations help the world get closer to normal. At the same time, jumps in prices for raw materials are forcing companies across the economy to raise their own prices for customers, from fast food to used cars.

That's fueling concerns over whether higher inflation will be temporary, as the Fed expects, or more long-lasting. The reality could be more complicated. The rise in commodity prices is likely tied to increases in demand as the economy recovers, but rising wages will likely be longer lasting as employers increase pay in order to attract workers, Link said.

Investors got a bit of disappointing economic news when the Labor Department said the number of Americans who filed for unemployment benefits last week rose slightly. The total of 412,000 workers filing for jobless benefits was worse than economists expected. If it proves to be a trend rather than an aberration, it could push the Fed to hold the line longer on its support for the economy.

Stocks of companies whose profits are most closely tied to the strength of the economy and to interest rates had some of the market's sharpest losses.