Asian stocks slipped on Tuesday, their recent recovery stalling after European equities broke a winning streak, while the dollar edged further away from three-year lows. 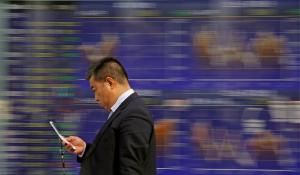 A man walks past an electronic stock quotation board outside a brokerage in Tokyo, Japan, February 9, 2018. Reuters photo

US markets were closed on Monday for a holiday, and the focus will be on whether Wall Street can maintain its recovery once trading resumes.

The Dow gained 4.5 percent last week, winning back more than half of the territory lost during a sharp downturn earlier in the month.

“Whether other markets can continue their recovery depends to a large degree on how US stocks perform,” said Masahiro Ichikawa, senior strategist at Sumitomo Mitsui Asset Management in Tokyo.

“Volatility will also have to keep settling for the broader recovery to continue,” he said.

The VIX index - Wall Street’s “fear gauge” measure of market volatility - has slipped below 20, less than half the 50-point peak touched earlier in February.

Upbeat prospects for global growth helped lift world stocks to record highs earlier this year, although slow wage increases have been a common issue for many economies.

For example, Japan has marked its longest economic expansion since the 1980s, but wage increases have remained elusive amid long stretches of deflation. A monthly Reuters survey showed that more than half of companies in the world’s third largest economy do not plan to raise base pay in annual wage talks in coming months.

DOLLAR PULLS AWAY FROM 3-YEAR LOWS

The dollar index against a basket of six major currencies was 0.3 percent higher at 89.346, continuing its rebound from a three-year low of 88.253 set on Friday.

Oil prices were mixed, with reduced flows from Canada pushing up US crude while Brent sagged on the back of weaker Asian stocks and the dollar’s bounce.

“OPEC and Russia continue to support the production cuts that are due to expire at the end of this year, and they assure markets that there will be an orderly ramp up of production once the cuts expire,” said William O‘Loughlin, investment analyst at Australia’s Rivkin Securities.