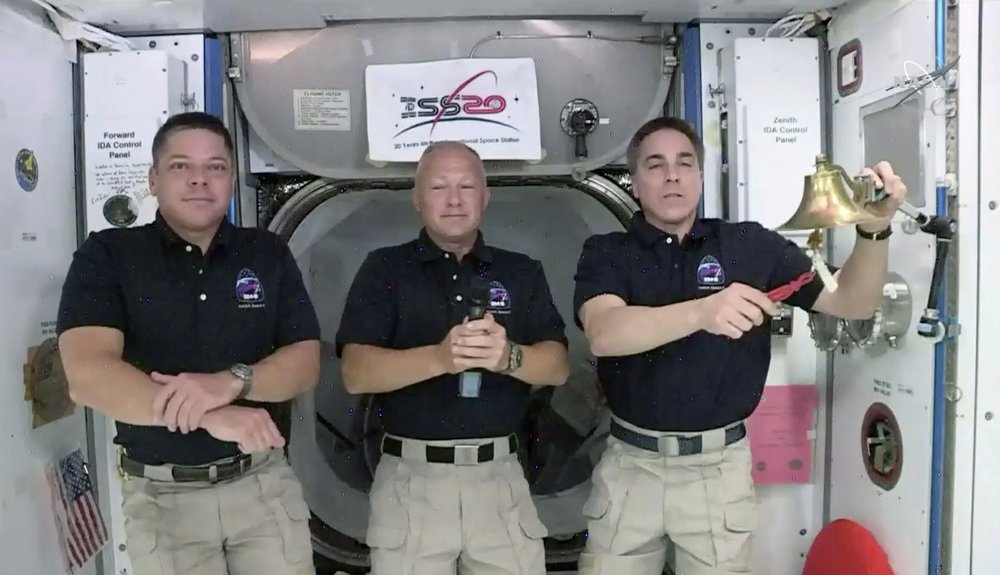 In this image from video made available by NASA, astronaut Chris Cassidy, right, rings the opening bell of the Nasdaq Stock Exchange accompanied by fellow astronauts Robert L. Behnken, left, and Doug Hurley in the International Space Station on Tuesday, June 2, 2020. (Photo: NASA via AP)

The astronauts launched into orbit by SpaceX joined in the ringing of the opening bell for the Nasdaq on Tuesday to mark “a pivotal moment” for the space economy.

NASA astronauts Doug Hurley and Bob Behnken took part in the ceremony from the International Space Station, three days after their launch by Elon Musk’s company.

SpaceX became the first private company to send astronauts into orbit, with its Falcon 9 rocket and Dragon capsule, and ended a nine-year launch drought for NASA.

The two astronauts floated alongside space station commander Chris Cassidy as he rang a ship’s bell to open trading on the Nasdaq Stock Exchange. Their image, along with live-streamed pictures of other NASA staff, lit up the Nasdaq marquee in New York’s Times Square.

“It is truly a pivotal moment in the development of the space economy and a new era of private human spaceflight,” said Nasdaq President Adena Friedman.

She asked the astronauts about making spaceflight more accessible to ordinary people.

“It’s really transformational when you come into space and look back at our planet, and then see how fragile it is and how thin the atmosphere is. It really does change you for the better,” Hurley said. “I think the more people that we expose to this, the better off we’ll be as a species.”

NASA wants to be just one customer of many, noted Jim Morhard, the space agency’s deputy administrator, who took part in the virtual bell ringing. SpaceX, Jeff Bezos’ Blue Origin, Richard Branson’s Virgin Galactic, Boeing and other companies looking to send people into space are driving down costs while increasing innovation, he said.

“We’re really at the dawn of a new space age,” Morhard said.