China's Huawei is a qualified telecom equipment provider, and the current debate over its security risks is surely a political issue, a senior executive at US carrier AT&T told the Global Times on Wednesday. 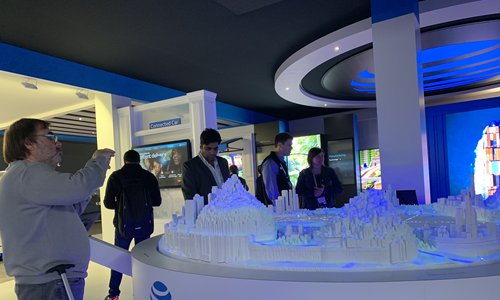 "I'm sure they're a very capable company, and they're having success in certain markets that they're in," Robert Boyanovsky, vice president of Enterprise Mobility at AT&T Business, told the Global Times in an interview during the ongoing Mobile World Conference (MWC) in Barcelona, Spain.

If Huawei is introduced to the US market after the geopolitical issues are resolved, AT&T will study the products of the Chinese company, Boyanovsky noted.

AT&T dropped plans to sell Huawei's smartphone in January 2018, as US lawmakers urged the No.2 wireless carrier to cut commercial ties with the Chinese company, according to media reports. The US company has chosen Ericsson, Nokia, and Samsung as the technology suppliers to build its mobile, nationwide 5G network, AT&T said in a statement last September.

When asked whether the case against Huawei is a political issue, Boyanovsky responded "of course" and he stressed that he could not make further comments on the technological advancement of the Chinese company until it gets "cleared up."

It's widely believed in the telecoms industry that the Chinese company provides low-cost products compared with its rivals including Ericsson and Nokia, and Huawei is also seen as the best-prepared vendor to begin shipment of 5G products and equipment. It has shipped more than 40,000 5G base stations so far, Huawei said in a recent statement sent to the Global Times.

The US is pressuring not only its own carriers but also other companies in Europe to reject Huawei's products at the largest industry event. The Trump administration sent a large delegation of senior officials from the State, Defense and Commerce departments, in addition to the head of the Federal Communications Commission, to continue this geopolitical campaign against Huawei at the MWC, the Wall Street Journal reported on Wednesday.

However, this effort has not stopped the Chinese company from being recognized by the telecoms industry.

The GSMA, which represents hundreds of carriers worldwide, announced on Tuesday that Huawei has won an award for its 5G innovation, and its smartphone won the "best smartphone" award at the event.