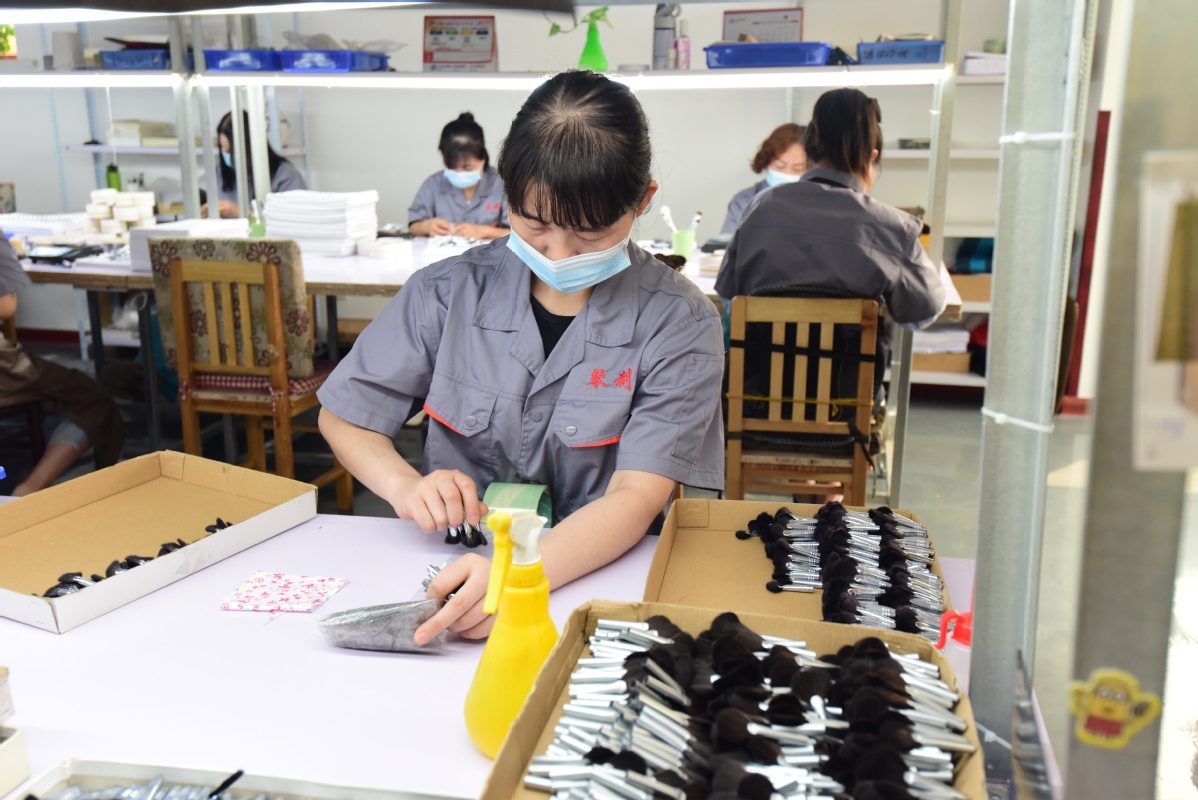 Employees of Qinzhi, a domestic brand, weigh makeup brushes and manually mold them into various shapes at a workshop in Cangzhou, Hebei province, in August. (Photo: China Daily)

More policy efforts to help downstream smaller businesses are likely to be in the pipeline, including boosting credit expansion and stabilizing the raw materials supply, after key price gauges pointed to the intensified cost pressure felt by these companies, experts said on Thursday.

China's producer price index, which gauges factory gate prices, rose by 9.5 percent year-on-year last month, up from 9 percent in July and marking their highest level since August 2008, the National Bureau of Statistics said on Thursday.

The consumer price index, a main gauge of inflation, grew by 0.8 percent year-on-year last month, down from 1 percent in July, the bureau said.

The readings combined to send the difference in PPI and CPI growth to a record high of 8.7 percentage points, which indicated the narrowing profit margins of midstream and downstream companies that are typically small and medium-sized enterprises, experts said.

It is possible for the Chinese central bank, the People's Bank of China, to cut the reserve requirement ratio in a targeted manner in the coming months, which will reduce the deposits some financial institutions hold with the PBOC and help boost business credit expansion, Lu said.

On the fiscal front, government bond issuance and fiscal spending will likely be accelerated and buffer downward economic pressure, he added.

According to the NBS, the PPI rose higher in August as buoyant demand and tight supply pushed up prices in the coal mining sector while elevated prices of upstream commodities passed through to the chemical sector.

Despite elevated industrial prices, CPI growth will remain at a low level, given dropping food prices, meaning that there remains some room for monetary policy ramping up support for SMEs, said Wen Bin, chief researcher at China Minsheng Bank.

"The nation should release more reserves of coal and nonferrous metals to mitigate the price pressure, and lend SMEs more support to cope with rising raw material costs," Wen said.

The National Food and Strategic Reserves Administration announced on Thursday that it will gradually release an unspecified quantity of its crude oil reserves onto the market, after it released 150,000 metric tons of copper, aluminum and zinc reserves on Sept 1, to alleviate the impact of rising raw material prices.

An executive meeting of the State Council decided this month to increase the relending quota for small firms by 300 billion yuan ($46.5 billion), as part of a series of new measures to support smaller businesses.

The intensified cost pressure in China came amid rising inflationary pressure globally. For example, Eurostat, the statistical office of the European Union, said last week that eurozone annual inflation is projected to rise to 3 percent in August, the highest in almost a decade.

"I don't think China is exporting inflation to the rest of the world," she said, noting that commodity-intensive investments have been lukewarm in China, and most of its exports have been consumer goods, which only saw moderate price growth.