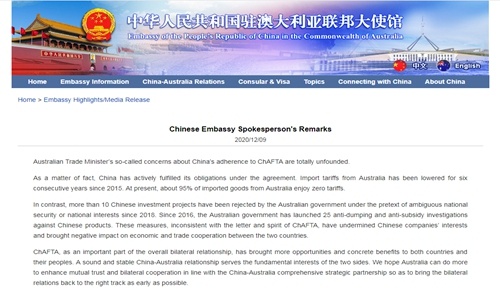 Screenshot of official website of China's embassy in Australia

A spokesperson from China's embassy in Australia posted an announcement on the embassy's official website on Wednesday addressing accusations made by Australian officials claiming China's restriction of imports from Australia is baseless and arbitrary.

The Chinese embassy responded by saying that China has and will continue to fulfill obligations under the free trade deal signed between the countries four years ago. The agreement designates 95 percent of Australian imported goods as been exempted from import tariffs with China only sparingly refusing imports, based on health, safety or compliance grounds.

In contrast, since 2018, more than 10 Chinese investment projects in Australia have been rejected by the Australian authorities often citing "national security" or "national interest" considerations. Since 2016, the Australian government has initiated 25 anti-dumping and countervailing investigations against China, said the embassy announcement.

The embassy reiterated that a healthy and stable China-Australia relationship serves the interests of both nations, noting however that Australian trust and respect towards China was a necessary precondition to improved bilateral relations.