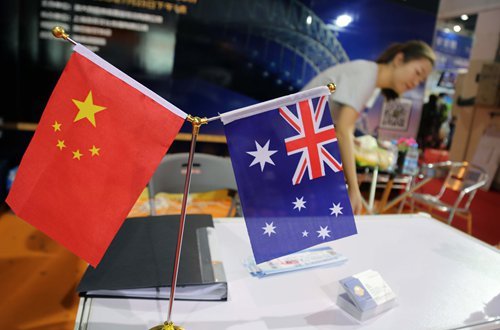 GDP grew by 3.1 percent for the quarter ended in December on a quarter-on-quarter basis, while the economy contracted 1.1 percent on the year, data from the Australian Bureau of Statistics (ABS) showed on Wednesday.

Australian Prime Minister Scott Morrison declared on his Twitter account on Wednesday that Australia's comeback from the pandemic "continues to gather pace" and Australia's fourth-quarter performance was better than all the G7 nations and the average for the Organization for Economic Cooperation and Development (OECD) members.

Analysts noted that Australia's GDP performance was a result of its very low community transmission of COVID-19, on top of massive and timely fiscal and monetary stimulus.

Yet Chinese analysts pointed out that demand from China also strongly supported the Australian economic recovery despite engaging in confrontational activities toward China. Australia owes much to its status as the most China-dependent economy among the Western countries, and that relationship allowed Australia to pull off a deep V-shaped recovery that resembles China's, analysts said.

China was the only major economy that grew in 2020, expanding 2.3 percent in its GDP.

"China-Australia trade has a direct impact on the performance of the Australian economy, as Australia could not find an alternative market such as China's," said Song Wei, an associate research fellow at the Chinese Academy of International Trade and Economic Cooperation.

The terms of trade rose 4.7 percent in the quarter with higher export prices, particularly for iron ore, according to the ABS. Stronger trade contributed to a 4.2-percent increase in Australia's GDP last year, the strongest since 1983.

Ning Tuanhui, a research assistant at the China Institute of International Studies, said a recovery in the Chinese economy in the second half of 2020 definitely helped prop up Australian economy.

In October, 80 percent of the iron ore exported by Australia went to China, according to media reports.

"The huge increases in the value and volume of iron ore exports to China in the second half ... played a major role in driving the Australian economy," Ning told the Global Times, noting that iron ore, Australia's top foreign exchange earner, was not affected by the trade friction last year that affected items such as beef, lobster, barley and wine.

Besides iron ore, there are other items that banked on China's consumption power, particularly during the Spring Festival holidays.

Swisse, Australia's top multivitamin brand, was favored by many Chinese customers during the Spring Festival holiday this year.

According to an official blog post from JD.com, Swisse was one of the top three brands among the health supplements in JD's duty-free stores in South China's Hainan Province.

Sales of health supplements during the festival accounted for 54 percent of total sales.

However, Chinese analysts warned that as an export-reliant economy that has lost favor with its largest trading partner and the buyer of much of its commodity exports, the Australian economy faces increasing uncertainty in 2021.

Australia is having its first recession in almost 30 years. Analysts predicted a worsening relationship with China, coupled with a move by China toward import substitution as a result of the soured relationship, will increasingly weigh on the Australian economy in 2021.

Should Australia continue to provoke China and harm China's bottom line, it will inflict acute pain on itself, Song said.

Repeatedly expressing desire to talk with China over trade, Australia sent a military maritime patrol plane over the East China Sea this week. This followed media reports in February that the Australian navy was planning to join with the UK's sole aircraft carrier in a deployment to show muscles in the South China Sea.

"The world economy is recovering from the pandemic in 2021, and cooperation will mean more opportunities for both China and Australia to grow their respective economies, but it depends on whether bilateral ties can return to the normal track," Ning said.