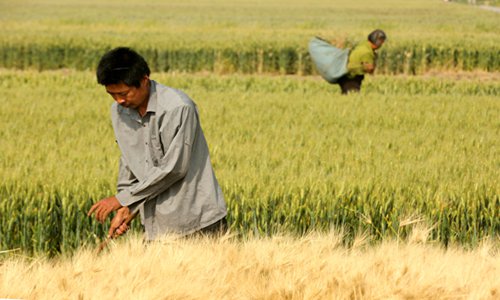 Farmers harvest barley in Huaian, East China's Jiangsu Province on Saturday. Saturday was Grain Buds, one of the 24 Chinese solar terms that marks an increase in temperatures and the beginning of summer in many places in China. (Photo: IC)

Australia's "under-the-table subsidies" on barley through its tax system have harmed China's grain sector and violated trade rules, which might be the cause of the extension of China's anti-dumping and anti-subsidy investigations, experts said Monday, following media reports that Canberra voiced concern over potential tariffs on its barley.

Australian Trade Minister Simon Birmingham was quoted as saying by Reuters on Sunday that "The Australian government is deeply concerned by reports that unjustified duties may be levied on Australian barley imports to China," as results of the China-raised anti-dumping and anti-subsidy investigations on Australia's exported barley are due in the coming weeks.

In response to an application from the China Chamber of International Commerce (CCOIC), China's Ministry of Commerce (MOFCOM) started investigating Australia's exported barley in November 2018 on the grounds that its barley price had been lower than the normal price, which harmed China's domestic grain market.

"It is a normal trade remedy and investigation case under China's laws and the WTO's rules," Zhao Lijian, a spokesperson of China's Foreign Ministry, said on Monday.

"It is true that Australia has canceled subsidies on agricultural products, but actual 'under-the-table subsidies' are still there as the Australian government compensates farmers through their tax system," Li Guoxiang, a research fellow on agricultural sector at the Chinese Academy of Social Sciences, who visited to Australia for an agricultural industry study, told the Global Times on Monday.

The MOFCOM in November 2019 extended the investigation for another six months, citing the complexity of the case. And the value of imported barley was only $662 million in 2019, a more than 35 percent drop from $1.02 billion in 2018.

"While the investigation has not been made public so far, the extension was likely because of a probe on 'unseen subsidies,' which takes longer time," Li said.

"Barley is usually used for brewing beer, but since 2014, much of imported barley was also used as fodder, as the cost of barley went abnormally low, causing a severe impact on China's domestic grain crops sector," Li noted.

"China had to be responsible to domestic farmers," Li added.

Besides the row on barley, ties between China and Australia have deteriorated in recent years as the latter has conducted a series of unfriendly moves against China, including its attitude on the South China Sea issue, its white paper that urged an alliance with the US to contain China, and a call for a US-proposed investigation into the origin of the COVID-19 when Washington desperately tries to deflect blames on Beijing.

Experts said the investigations, which started in 2018, are not related to Australia's call for an investigation into the origin of the COVID-19.

"Australia's economy has deep links to China as it's one of China's major trade partners, which affects its national interests. However, some Australian politicians follow the US in pursuing political interests rather than real national interests, which has harmed China and ties between Beijing and Canberra," Jiang Yong, an expert at the China Institutes of Contemporary International Relations in Beijing, told the Global Times on Monday.

"Australian politicians should know what Australia's real national interests are. And if they continue to anger China, China would use more countermeasures besides tariffs to respond," Jiang said.

Jiang noted that China and Australia have a good foundation for thriving relations - the two countries have no territorial disputes, and trade ties are complementary. "So it would be mutually beneficial for the two countries to have sound ties."